Just as lawful, responsible hunters are critical to the health of many of North America’s wild game populations, they also can be important in controlling invasive species that cause damage to habitat and native game species. Such is the case with Burmese pythons in the Florida Everglades, where the startling population growth of the invasive species has had a negative impact on native wild game populations.

But thanks to python hunters from 32 states and two foreign countries participating in Florida Python Challenge 2022 from Aug. 5-14, an incredible 231 pythons were caught by the hunters during the annual 10-day event—nearly three times as many as last year.

One young python hunter, 19-year-old Matthew Concepcion from south Florida, caught a whopping 28 Burmese pythons to win the $10,000 Ultimate Grand Prize courtesy of the Bergeron Everglades Foundation, which works to restore animal habitats and natural water levels throughout the nation’s largest subtropical wilderness, making for a very profitable hunt. In total, more than $20,000 in prize money was won by python hunters during the challenge, co-hosted by the Florida Fish and Wildlife Conservation Commission (FWC), South Florida Water Management District and the Fish and Wildlife Foundation of Florida.

“Once again, the Florida Python Challenge has yielded impressive results with hundreds of invasive pythons being removed from the wild,” said Gov. Ron DeSantis in an FWC news release. “Removing these snakes is one of the many efforts we are employing to restore and maintain the Everglades ecosystem.” 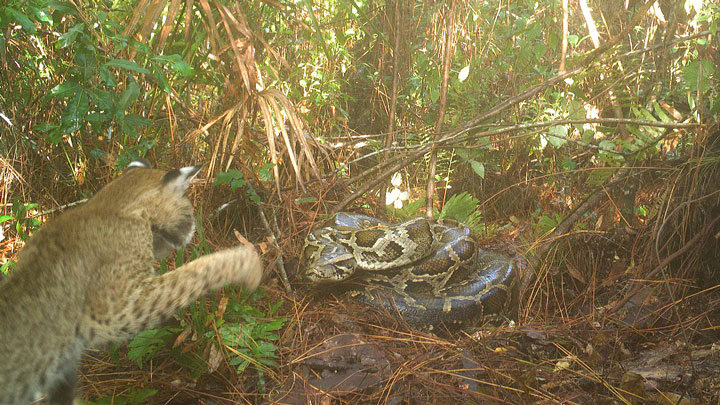 In Florida, the non-native Burmese pythons are found primarily in and around the Everglades ecosystem in south Florida where they harm the ecosystem and biodiversity, preying on birds, mammals and other reptiles. A female Burmese python may lay 50 to 100 eggs at a time. Since 2000, more than 17,000 wild Burmese pythons have been removed from the state of Florida.

Interestingly, the pythons can provide hunting opportunities for Floridians and others even when most other hunting seasons are closed. According to the FWC, anyone can remove and humanely kill pythons any time on private lands with landowner permission and on 25 Commission-managed lands throughout south Florida.

While it might sound like fun, hunting pythons isn’t for the faint of heart. The largest caught in the 2022 challenge was just a tad over 11 feet long, which isn’t a small snake. And they can get much, much larger. Last year they captured the heaviest female Burmese python ever caught in Florida. The huge snake was nearly 18 feet long, weighed 215 pounds and had 122 developing eggs inside her.

Doubling down on hunting to reduce the runaway population of the snakes, Florida also has a Python Removal Contractor Program, which pays contractors an hourly rate to hunt pythons, and then pays them by the foot for snakes captured. The FWC even conducts Python Patrol Workshops around south Florida. This no-cost training program is designed to create a network of trained individuals throughout south Florida who know how to identify Burmese pythons, report them and sometimes capture and remove them.

About the Author
Freelance writer Mark Chesnut is the owner/editorial director at Red Setter Communications LLC in Jenks, Okla. An avid hunter, shooter and field-trialer, he has been covering Second Amendment issues and politics on a near-daily basis for over 20 years, previously serving as editor of the NRA’s America’s First Freedom.