The ever-increasing number of feral hogs across the United States and the species’ ever-expanding range has been termed the “swine bomb,” in various media outlets, and for very good reasons. What was a relatively small and dispersed number of wild porkers a few decades ago has grown into an estimated 9 million feral hogs in 35 states doing at least $1.5 billion in damage annually, much of it to crop and livestock operations.

The state where the latest bomb has gone off? Louisiana, where a new study estimates that feral hogs cause more than $91 million per year in damages to that state’s agricultural and timber operations. That’s significantly higher than what was reported in a 2013 study, which put the damage estimate at $66.2 million annually.

Louisiana hunters do what they can to combat these invasive hogs, taking a large number every year. Hog hunting in the Pelican State is open all year on private lands, with no bag limits, with hunting more limited on state-operated Wildlife Management Areas. The landowners suffering the above-cited damages also do their part to hunt and trap the voracious hogs as best they can, but the hogs still seem to be winning the battle.

Feral hogs are found in all 64 parishes of Louisiana, with an estimated state population that might be as high as 1.2 million animals, according to James M. LaCour, State Wildlife Veterinarian with the Louisiana Department of Wildlife and Fisheries (LDWF) Wildlife Division.

To arrive at the $91 million in hog damages, researchers at Louisiana State University’s (LSU) AgCenter surveyed state residents and concluded that “hog damage costs landowners $66.2 million in crop losses and $24.9 million in other expenses annually. More than 950 people completed the survey, representing nearly 660,000 acres of crop fields, pastures and woods.” 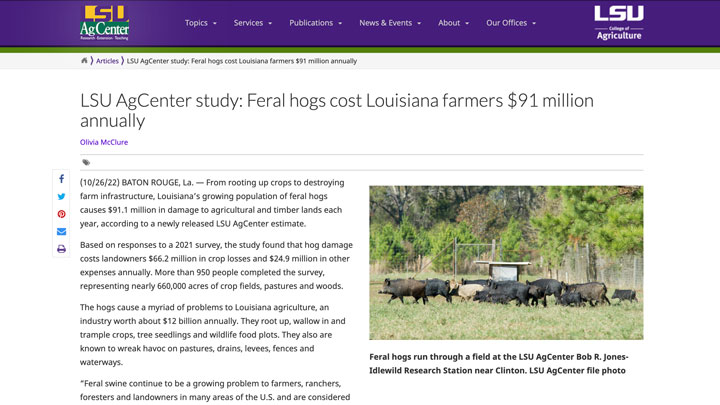 In Louisiana, wild hogs do what they do across all 35 states where they are found: They root up pastures, trample and eat crops, breach fences and destroy wildlife food plots. These four-legged roto-rooters love to dig and wallow and can quickly turn a cattle pasture or a crop field into something resembling a moonscape.

The hogs even cause water-quality issues, defecating in streams and ponds. They also damage waterways by rooting into and digging up stream banks and causing them to collapse. Hogs represent a real problem for the Louisiana’s timber industry, too, as they dig up seedlings and can make logging access roads impassible with their digging.

“Feral swine continue to be a growing problem to farmers, ranchers, foresters and landowners in many areas of the U.S. and are considered to be one of the most damaging invasive species in existence,” wrote AgCenter study authors.

Given that the hogs can have two and even three litters of piglets per year, the general statistical estimate is that approximately 70 to 75 percent of any hog population must be harvested annually to control feral swine numbers.

As the AgCenter study noted, “In Louisiana, hunters harvest less than half, so populations continue to grow… .”

As LaCour pointed out, hunters do in fact take a sizeable number of feral hogs every year. Hunter harvest surveys suggested approximately 50,000 hogs were killed by hunters in the 2005-2006 hunting season, which surged to 624,500 hogs harvested in the 2020-2021 season. Last year, Louisiana hunters bagged just shy of a half million wild porkers.

Louisiana is home to 1.6 million acres of public Wildlife Management Areas (WMAs). Hunting of hogs is allowed on most WMAs, though there are some significant restrictions.

“Most feral hog hunting is concurrent with other open hunting seasons utilizing equipment appropriate for that season,” LaCour noted. “For example, during squirrel season feral hogs may be harvested on the WMAs with a rimfire rifle or handgun or shotgun with shot appropriate for squirrel hunting. During the firearm season for deer, feral hogs may be harvested with a centerfire rifle or handgun or shotgun with buckshot or slugs.”

Those who are directly impacted by the hog damage are doing what they can to limit it. According to the LSU AgCenter survey, 92 percent of these landowners used hunting to control local hog numbers, and 70 percent indicated they used trapping. Success in reducing hog numbers was varied, with approximately one-quarter of respondents saying that their efforts have reduced hog populations.

Louisiana’s WMAs can have sizable numbers of hogs, and LaCour admitted that nearby landowners and hunters themselves have asked for expanded hog hunting opportunities in these WMAs. However, he added, “To date, LDWF has resisted extended seasons to limit disturbance during the summer months as the WMAs are also wildlife preserves.”

A basic hunting license is required to hunt or trap feral hogs in Louisiana. Night hunting with lights, and night vision or thermal optics is also legal on private lands, though hunters must contact the parish sheriff within 24 hours prior to going night hunting or immediately upon attempting to take a feral hog at night.

About the Author
NRAHLF.org contributor Brian McCombie is a field editor for the NRA’s American Hunter and writes about firearms and gear for the NRA’s Shooting Illustrated. He is a member of the National Rifle Association and the National Shooting Sports Foundation. Brian likes hunting hogs, shooting 1911s chambered in 10mm and .45 ACP, watching the Chicago Bears and relaxing with his two cats, Peanut Morgan and MikaBear.