If you’re following wildlife management efforts in Yellowstone National Park (YNP), then you are aware of how bison populations are exploding above carrying capacity. Media outlets report that Yellowstone National Park (YNP) captured 37 bison in February that were migrating outside the park as part of officials’ annual management program to cull their populations to maintain carrying capacity and prevent the bison from spreading the disease brucellosis to cattle in neighboring Montana. The plan is to remove up to 900 of the park’s 5,000 bison this winter through slaughter, relocations and hunting under an agreement between state, federal and tribal officials.

According to YNP bison coordinator Tim Reid on Feb. 24, 27 of the bison captured were sent to the Confederated Salish and Kootenai Tribes for slaughter to provide food for tribal members. Six others are being quarantined for relocation to tribal lands and four calves have been released. In a separate account, Greg Lemon of Montana Fish, Wildlife and Parks said that two bison also were shot by hunters so far this winter.

Bison regularly head north out of YNP into Montana in the winter, causing concern that they could spread brucellosis, a bacterial disease that causes cows to abort their calves. While brucellosis has been known to spread to humans, this rarely occurs in the United States. The reports shared that while elk have spread the disease to livestock, there are no documented cases of bison spreading brucellosis to livestock in the wild. However, on Feb. 22, Montana livestock officials said that a cow from a Gallatin County herd had been detected with the disease, marking the 12th herd to be affected by brucellosis since 2010.

While YNP says future bison management plans will place more emphasis on alternatives to slaughter, culling will continue until late March. Reid says stopping then will make sure bison cows are not captured while in late-term pregnancy. The challenge is that there are only four weeks left to meet culling objectives, which continue to fall short every year, showing the need for management plans to include both lethal and non-lethal means.

According to the NPS website, in the winter of 2020/2021, 187 bison were removed—far below the 500 to 700 animals that wildlife managers recommended. For the 2021/2022 winter, the NPS recommends removing 600 to 900 bison to slightly reduce the population to 4,300 to 4,700 animals by the end of winter and 5,200-5,700 animals after calving. It notes that bison removal only should occur near the northern YNP boundary where animals from the central and northern herds converge. Wildlife managers track migrations and only remove animals from the northern herd. If initial removal targets are met but then the number of bison exiting the park exceeds what the area can handle, then up to 200 more bison could be killed for food or captured.

The NPS says the YNP bison population has steadily grown over the past 50 years. The park had 500 bison in 1970 but the most recent report documents that bison now number more than 5,000. YNP bison herd management is conducted by five federal and state agencies and three tribal entities in a cooperative effort called the Interagency Bison Management Plan. Managers include the U.S. Department of Agriculture’s Animal and Plant Health Inspection Service; the Confederated Salish and Kootenai Tribes in Montana; the InterTribal Buffalo Council; the Montana Department of Livestock; Montana Fish Wildlife and Parks; the National Park Service (YNP); the Nez Perce Tribe; and the U.S. Forest Service (Custer-Gallatin National Forest). Bison are killed every winter to try to maintain the park’s carrying capacity based on available habitat. Montana also allows a few bison in areas bordering the park to be culled partly due to concerns that they could transmit brucellosis to cattle while competing with cattle for grass and causing human safety and property damage concerns.

It is important for animal rights extremist groups such as In Defense of Animals that push only non-lethal management options to grasp that bison reproduce and survive at relatively high rates compared to other wild mammal species. According to the NPS, the YNP bison population increases by 10 to 17 percent each year. Because bison defend themselves as a group, they can better withstand attacks from predators such as bears and wolves. Unlike with elk, predation has little effect in reducing bison populations. Reports share that non-lethal management options outside of using predation and hunter-volunteers also are needed in managing bison outside YNP. Just like when hunting species such as elk on public land that adjoins private property, bison figure out very quickly where the boundary is and don’t give hunters outside the park much opportunity.

YNP is not the only national park addressing concerns with expanding bison populations. In November, this NRA Hunters’ Leadership Forum website reported on increasing concerns at Arizona’s Grand Canyon National Park where bison number two to three times the carrying capacity. It used hunter-volunteers to help cull the population along the North Rim, which at 400 to 600 animals far exceeds the carrying capacity of 200. 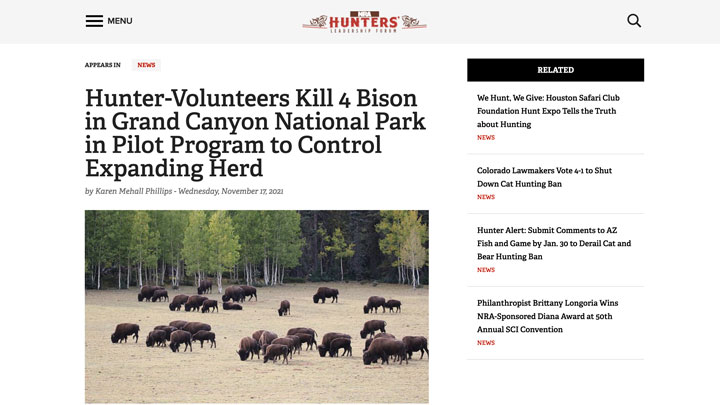 As that article explained, it was the National Rifle Association and Safari Club International that urged the NPS to permit hunters to assist with culling overpopulated ungulates on national park lands. For years, NPS favored the use of contract sharpshooters and federal personnel, partly to avoid fighting animal rights extremists’ claim that “hunting” was being allowed in the park. NPS also said that using volunteers would be illegal and costly. “Thanks to continued pressure from NRA and SCI,” the article explained, “the NPS conducted the Rocky Mountain National Park and Theodore Roosevelt National Park study using hunters to reduce elk populations. When the study report was released in 2016, it confirmed that the use of hunter-volunteers in culling operations on NPS units was legal, cost effective and a great idea. In 2019, the NRA-backed Senate Bill 47 was signed in Public Law specifically authorizing the NPS to use qualified volunteers to reduce the size of wildlife populations (Public Law No.116-9).” America’s wildlife managers owe the NRA and SCI a debt of gratitude in protecting hunting as a vital wildlife management tool.