Good thing hunting is naturally in my blood because none of the hardships or poor experiences I’ve had during the last 20 years have sapped my desire to hunt and be outdoors. Certainly, not all people share my level of drive and passion. At the first hint of adversity, some folks want out immediately. For those who mentor new hunters, remember that the ability to retain them could hinge on the quality of their initial hunting experiences.

For example, if you take a new hunter deer hunting in below-zero temperatures and this person freezes and doesn’t see a single deer after three days, his or her interest in hunting is at stake. The same is true if the first experience involves a 3-mile hike into the remote backcountry looking for elk but no bugles are heard and not a single elk is seen. Now I’m not suggesting that you give a new hunter an easy hunt. That is the opposite extreme and instills false expectations for the future. Find some middle ground where work is involved but game is encountered. Just as important, make sure the experience is fun and comfortable.

Sharing tips for mentoring new hunters is a particularly timely topic considering the increasing participation in hunting and shooting since the pandemic. According to the National Shooting Sports Foundation, this website and multiple other outdoor media sources, there are an astounding 8.5 million-plus new gun owners since 2020.

While some guns are purchased for personal protection, it’s undeniable that many folks also are purchasing and using them for hunting. In supporting American’s drive to get outdoors, in April 2020, the NRA, Dallas Safari Club, Hunter Nation and Safari Club International signed onto a letter to state governors nationwide urging them to keep public lands open during the pandemic for hunting—“America’s most traditional form of social distancing.” The rise in hunting participation points to a need for even more hunting mentors to step forth and teach new hunters how to hunt responsibly and with safety and wildlife conservation in mind. Advancing participation in hunting and the shooting sports is precisely why the national R3 movement to recruit, retain and reactivate hunters exists. To that end, consider the following three hunts as examples of opportunities that create positive first hunting experiences and keep hunters returning year after year.

Shotgun Turkey Hunt
As spring nears, it’s fitting to begin by mentioning how a spring turkey hunt offers a great experience for a new hunter. First, using a pop-up blind to remain concealed gives the mentor and mentee a higher level of communication. The new hunter quietly can ask questions as the mentor explains and instructs. Your movements are hidden so you can enjoy snacks and storytelling during the hunt. In addition, camouflage clothing is optional, which means the new hunter need not purchase a camo outfit to give hunting a try, and the fact gobblers respond to your calls as they close the distance only adds to the excitement.

As I mentioned, it’s also good to show new hunters the amount of effort that goes into encountering your quarry and that success doesn’t come easily. Turkey hunting typically involves considerable scouting and a lot of patience and strategy. Yet despite the challenges, killing a spring gobbler is highly doable. This makes turkey hunting ideal for beginners as there are good odds for success.

Crossbow Whitetail Hunt
Although firearms are good tools for getting new hunters afield, in my opinion, crossbow hunting is even better for four reasons. First, when and where they’re legal during archery seasons, crossbow hunting occurs in warmer weather, such as in September and October. Second, crossbows have no loud report or recoil and are easier to grow accustomed to shooting than a rifle. Third, they shoot flat and accurately and require less practice time to master than when trying to learn to shoot and become proficient with a compound bow. Finally, I believe it’s best to minimize distractions during one’s initial hunting experiences. Crossbow hunting during archery season more easily allows a new hunter to observe deer behavior, watching as deer go about doing what they do, unlike during firearm seasons when guns are sounding off, often keeping deer on the move.

Considering wind direction plays an undeniable factor, one of the most obvious challenges is choosing the right stand or blind location for your new hunter. And then, it often takes hours of patience to see deer and eventually harvest one. But a good mentor will be able to help a new hunter encounter deer and remain engaged. Maybe a deer won’t be taken the first time out, but the hunt still paves the way for a positive experience. 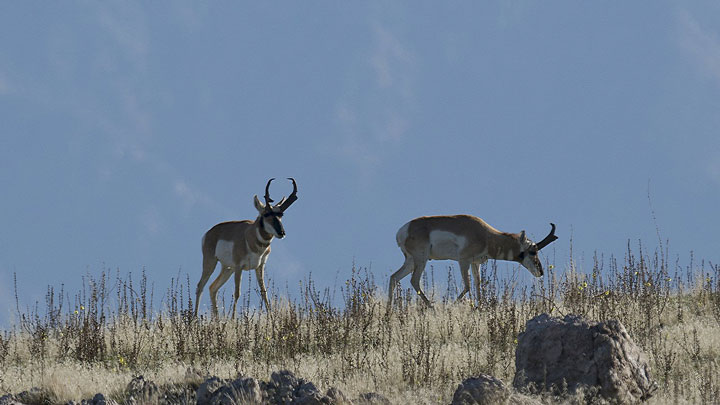 Rifle Pronghorn Antelope Hunt
Unlike when hunting whitetails, pronghorn antelope are visible all day. It’s not uncommon to see a dozen or two of them during an hour of glassing but seeing them and then getting in range and into a position to kill the continent’s fastest game animal are two different things. In addition, an antelope’s eyesight also is outstanding. You normally can’t just park the truck in plain view, walk upright into the pasture until you’re 150 yards away and then shoot one. Getting within range often involves crawling for hundreds of yards—and even then, the animal can bust you.

Antelope hunting is usually done in warm weather, so getting cold is rarely an issue. Just the opposite: It can be uncomfortably warm and dry, which has its own challenges, but like turkey hunting, success is very achievable. Antelope generally give the hunter plenty of time to watch them and prepare for an ethical shot. Unlike a whitetail cruising hard through the timber—often offering mere glimpses and maybe only a split-second shot opportunity—antelope remain in the wide open. They are liable to turn perfectly broadside with no obstructions, giving the hunter a high-percentage opportunity.

Final Thoughts
While some mentors allow their student hunters to tote a tablet, I don’t. When I take new hunters into the field, we’re hunting and I’m constantly teaching. If they are distracted from what’s happening, then they are missing important aspects of hunting. I want them alert and attentive so that they begin to build their hunting skills.

Remember: Hooking someone on hunting for life hinges greatly on his or her inaugural hunting experiences. Consider choosing a hunt from the above list. With your careful guidance, you can not only show someone a positive first hunting experience, but you will leave him or her anticipating the next adventure.