“Technology has given us an unprecedented opportunity to do the same for hunting as we have done for the Second Amendment. We are no longer captive to the hateful, biased, mainstream media.”

Promoting a broader awareness of NRA’s activities on behalf of hunters, the NRA Hunters’ Leadership Forum (HLF) National Symposium in Fairfax, Va., Nov. 3-5, addressed the evolving hunting demographic and the critical cultural challenges facing hunting and wildlife conservation in the 21st century. With topics ranging from how to reposition hunting in the mainstream media; the critical role of women to hunting’s future; strategies for fighting animal-rights infiltration in our government, courts and law schools; and how to move beyond where we are today, speakers throughout the two-day event kept the audience engaged with presentations and participated in open discussions to answer audience questions. But when conversation turned to the sheer politics and future of protecting the American hunting heritage, who better to take a turn at the podium than NRA leaders who are every day in the trenches: NRA Executive Vice President Wayne LaPierre and NRA-ILA Executive Director Chris Cox.

“When we tell the true story of hunting and wildlife conservation,” said Wayne LaPierre to the energized HLF charter members whose donations have laid the groundwork for this unprecedented initiative to preserve our hunting rights, “the American public will come down on our side. We are no longer held hostage by the networks and big news outlets. NRA has developed a communications platform that reaches millions and can go right around the media directly to the American people.” 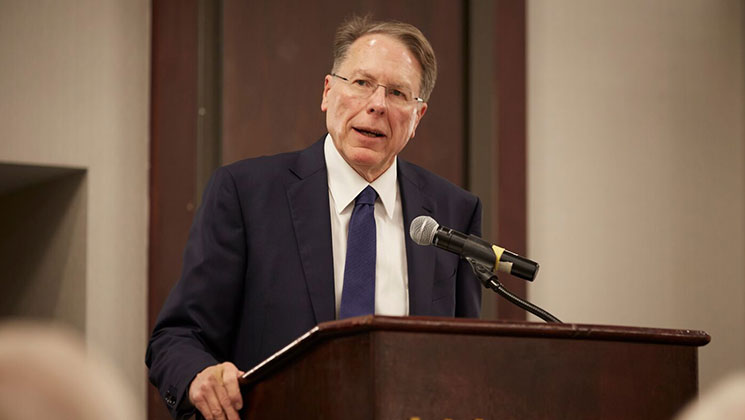 That sentiment was echoed by Mark Duda, executive director of Responsive Management, a polling firm, who explained during his presentation titled “What the Data Tells Us,” that through his firm’s various research initiatives and surveys, the data show that the majority of the American public approves and supports legal and regulated hunting.

“Hunting has everything to do with the Second Amendment,” said NRA-ILA Executive Director Chris Cox as he took to the podium to outline a 2016 election strategy that uses NRA firepower to do the heavy lifting. “If we (American hunters) don’t start treating politics like a job, we will lose hunting and the future of our country,” Cox said, explaining how our opponents do this so effectively.

With shame, ridicule and a mob mentality all part of the anti-hunters’ campaign, it is clear we have two choices. We can either complain while trying not to offend anti-hunters, even as groups like PETA and HSUS indoctrinate our children, or we can become engaged in the fight.

Engaging in the fight is just what your NRA plans to do. “Right now,” explained LaPierre, “we are working on a communications plan to fight for hunting the same way we have fought for the Second Amendment.”

And fortunately for American hunters, no one runs a campaign like the NRA, which focuses on three key elements: communication to take control of the conversation; education through NRA’s numerous safety and education programs; and activation by getting hunters to respond. “NRA can run the campaign with a strategy designed to win,” said Cox.

Speaking about NRA’s outreach through social media, past NRA President Jim Porter said, “We can be proud of what we’re doing now, but we’re going to do it better, we’re going to be even more focused, and we’re going to stay disciplined. That’s how we’ll communicate what NRA does to represent hunters.”

NRA leadership is committed to being proactive to the extent that during the fall 2014 meeting of the NRA Board of Directors, NRA Hunting, Wildlife and Conservation Committee Chairman Richard Childress of NASCAR fame—and now NRA 2nd Vice President—recommended that the Board adopt the North American Model of Wildlife Conservation as NRA policy, which it did unanimously.

Co-chaired by past NRA President Jim Porter, who spearheaded the launch of HLF in 2014, and Melanie Pepper, member of the HLF Founders Club and charter member of the NRA Women’s Leadership Forum—the HLF symposium focused on the need to be proactive. Clearly, NRA leadership is committed to whatever it takes to preserve hunting in America.