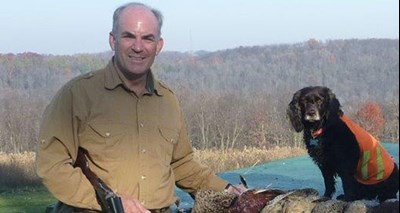 Robert Unkovic keeps his eye on the future. President of a Pennsylvania investment management company, Rob has spent his adult life making critical decisions based on what lies ahead—and apparently he’s pretty good at it. Knowing what the future holds is more than a guessing game for Rob; it’s his livelihood, and a lot of people rely on him to be right. Even his interests and community involvement are driven by his inclination for forward thinking. He’s on the board of several technology companies, former Trustee for the Episcopal Diocese of Pittsburgh, Co-chairman of the Duquesne Club Rod & Gun Society, and Co-founder and Chairman of the Old Joe Club, a not-for-profit organization that raises funds to support disadvantaged youth, education and conservancy issues. If that’s not enough, he is also an avid upland game hunter, husband and father of three.

Knowing Rob’s propensity for building a strong future, it is no surprise that he took an immediate interest in NRA’s recently launched Hunters’ Leadership Forum (HLF). In fact, he was one of the first to join the HLF President’s Founders Club, the leadership nucleus of the Forum, and co-chaired the First National Hunters’ Leadership Luncheon held in conjunction with the 2014 NRA Annual Meetings in Indianapolis, Ind.

“We are at a seminal moment in history for many of our freedoms,” said Unkovic, “and we have to act now on our decision to protect not only the future of the Second Amendment, but also the future of hunting, or it will be too late.” It’s not his hunting rights he’s so worried about but rather those of his children, and your children and the generations that follow. So what do we do about it? “We make ourselves heard,” he said. “What’s happening now is our hunting rights and land rights are being quietly chipped away. That cannot happen anymore.”

The NRA Hunters’ Leadership Forum aims to do just that: be heard. The NRA has always stood for hunters, and since its start in 1990, NRA Foundation grants have provided essential program funding to support programs promoting hunting education, wildlife management, conservation and the development of hunter education materials and skills training.

The NRA Foundation is the nation’s leading shooting sports charity, awarding 2,350 grants totaling more than $11 million to support hunter and related educational programs in 2013 alone. That’s no small sum, but it’s no match for the opposition. That’s why the Hunters’ Leadership Fund was established. A permanent endowment, the Hunters’ Leadership Fund will provide an annual funding source to perpetually enhance and grow NRA’s hunting programs and activities.

Rob Unkovic is a longtime supporter of The NRA Foundation, and becoming a member of the HLF President’s Founders Club is another good investment toward protecting the sport he loves. “Rob has really stepped into a leadership role for the Hunters’ Leadership Forum,” stated James W. Porter, II, NRA President and NRA Foundation Trustee. “He is an uncompromising leader in protecting and defending our rights as hunters, and I look forward to all that we will accomplish together.”

Rob has been a shooter since his youth. As a young teenager he was introduced to shooting and hunting by his Uncle Dan, and the rest is history. Rob’s wife, Georgia, joined the shooting game early on in their courtship, and now, three children later, it’s a family affair. Even as adults, Rob and Georgia’s two sons, Daniel and Nicholas, spend as much time in the field with their parents as possible. Their daughter, Mary, is an accomplished pistol shooter who prefers time at the range, but has bagged her fair share of birds, too.

The fight to protect, promote and defend hunting is ongoing, but not insurmountable. Let’s give future generations a more robust, lively and vibrant hunting and conservation culture than has ever before existed. It’s time to take a lesson from Rob Unkovic: Work now to protect our future.