On Saturday after spending the morning taking my friend Rob elk hunting in Colorado, we turned on the news and learned the New Jersey black bear residents called “Pedals” had been killed by a hunter. Once again, anti-hunters were tugging at the public’s heartstrings and, once again, there was outrage. Why? Because the animal’s front legs were disabled so it had to walk on its hind legs, which made it unique. This brings up the bigger story: New Jersey is overrun with bears, but anti-hunters don’t want you to hunt them—and they certainly don’t want the public to know how serious the problem is. Why not? Because then the New Jersey legislature would not have been able to use Pedals to pull off last week’s vote to shut down its bear hunting season.

Yes, in case you haven’t heard, New Jersey legislators just passed a bill to try and end bear hunting, though the state is crawling with bears. The antis say hunting has little impact on bear-population control and blame the bear overpopulation on the fact residents don’t do a good enough job of securing their trash! So this is why all 21 of its counties are overrun with black bears?

NRA-ILA’s Darin Goens, chief lobbyist and a current resident of the Garden State, explains that while Gov. Chris Christie will not sign the misguided bill into law, Christie’s term in office expires next year. If Christie’s successor is anti-gun and anti-hunting, which most politicos say is a given, then the state’s bear population—and human-bear encounters—will only escalate. Bears already roam neighborhoods freely, posing threats to public safety. Future management of the state’s bear population depends on electing a pro-hunting candidate who understands common-sense, science-based wildlife management.

In the meantime, what does all this mean for New Jersey residents who are struggling to live with excessive numbers of bears—in their yards, coming for their pets, damaging their vehicles and other personal property? It means they have at least one more—but maybe only one more—bear season to make a dent in the bear numbers. The challenge is that New Jersey is the fourth smallest state— 8,729 square miles—and the 11th most populous, and that bears are attracted to the slightest odor and have an acute sense of smell. Considering the most common problem communities report involves bears invading their trash cans, they’re in trouble. 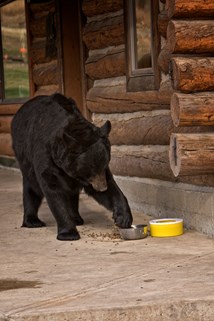 “On the property where I deer hunt, for example, six bears were killed right across the street. Our game cameras don’t even get deer photos because there are so many black bears,” Goens explains. “And they’re massive—800 pounds—sows with one cub, sows with two cubs. We are overrun, and it’s killing our deer hunting”—which he adds compiles the problem in a state that is also overrun with deer.

While hunting is any given state’s primary wildlife management tool, it only can help to keep wildlife populations in check where permitted. Goens, who lived in Colorado for years, says New Jersey has even more black bears per capita. “The problem is that New Jersey has the highest density of black bears of any state,” with Sussex and Passaic counties in the northern part of the state the absolute worst.

New Jersey Can Learn From Colorado
As a lifelong Colorado resident, I saw what happened in my own state when the general public strips away wildlife-management authority from state biologists who are the ones who know what is really happening in the field. Years ago, you could bait bears in Colorado during a spring season as hunters helped biologists to keep bear populations in check with carrying capacity. Then someone in Denver or Boulder pulled together a few anti-hunters to the spring bear season onto our November ballot. Then came a media campaign and more lies. They said lactating sows were being killed during the spring season so their cubs died of starvation when, in fact, only one lactating sow accidentally had been taken by a hunter the previous spring. The fact: Far more lactating sows were killed on the highway that year. The ballot measure passed. So instead of Colorado taking in revenue from hunters and local businesses benefitting from hunters’ dollars, the state pays government trappers and their own employees to remove problem bears quietly so those people in Boulder and Denver don’t scream about it. The same thing will happen in New Jersey, and the overpopulated-bear situation will get worse.

Forgetting History Means Repeating It
My friend Rob, who I mentioned earlier, fittingly is Rob Keck, Director of Conservation for Bass Pro Shops—long-time CEO of the National Wild Turkey Federation and a former member of the NRA Board’s Hunting Wildlife Conservation Committee. He has firsthand experience with New Jersey’s bear problem after hunting and filming an episode there a few years back for the Boone and Crockett Club’s “Boone and Crockett Country” TV show.

At the time, human-bear conflicts in New Jersey had hunters and non-hunters alike pushing then-governor Jon Corzine to reopen a hunting season. During that hunt, Keck interviewed several state wildlife biologists and residents. Bear-damage complaints in just one subdivision included bears killing pets, chickens and other farm animals and breaking into vehicles. Keith Balford, director of marketing at the B&C Club, says this particular episode is still popular and goes far in showing the plight of New Jersey residents. The 22-minute video is a must-see—especially for any non-hunters who don’t understand that hunting is conservation. To watch it, click here.

So while New Jersey’s bear season is safe for the fall of 2017, Christie’s term runs until Jan. 16, 2018. What happens after that depends on its next governor. If common sense prevails, then the state’s critically important bear season will continue.