As a father of two boys, I understand the joy my own father felt in passing down the hunting tradition that is so cherished in my family. 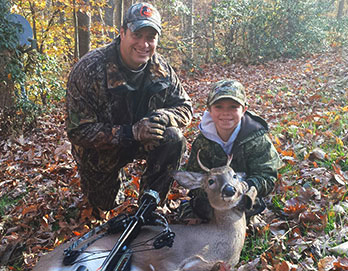 Joe Mehall (left) and his son, Joey, with his first deer

I also understand the concern he felt over the threats to hunting's future, as we had many discussions on that topic. Now as I try and explain to my kids how some fellow Americans feel compelled to strip away our rights and end hunting, they are learning that while anti-hunters are obvious in their mission, other threats are less severe, but just as real. In my home state of Maryland, limiting a hunter's access to hunting opportunities in the first place tops the list. Here's the latest example.

On Oct. 5, I caught a piece on Fox News. The National Park Service (NPS) had just announced that federal government sharpshooters—not hunters—will begin shooting hundreds of whitetail deer at two Maryland Civil War battlefields in December. Agricultural department sharpshooters specifically will kill 243 deer at Antietam National Battlefield and 278 at Monocacy National Battlefield between December and March 2017. It's all part of a five-year program NPS approved in 2014 to curb damage to area forests and plants. The NPS says the parks are overrun with deer to the point deer-population densities are more than 10 times greater than the sustainable density of 15 to 20 per square mile.

Fans of common sense ask: Why not have hunters do the job? While the culling operation is not a hunt, which means participants are not required to have a hunting license, hunters are the most experienced of all when it comes to making clean, humane kills on game animals. Of course, hunters in the mix would have a license anyway and know those fees go right back into state game management efforts while boosting the local economy with the gear, meals and lodging purchased along the way. Also worth noting is these culls are set for national parks where hunting is not otherwise permitted. Doesn't this show the effect hunting has in keeping game populations in check with carrying capacity?

And what about the tens of thousands of pounds of healthy game meat that is about to hit the ground? NPS spokesperson Jenny Anzelmo-Sarles said the government will donate "suitable deer meat" to area food banks. I doubt anyone gives more help to needy families than Maryland's Farmers and Hunters Feeding the Hungry program. [For an eye opener, check out the NRAHLF.org Hunters for the Hungry fact sheet.]

The NRA understands all of the above, which, by the way, is why I'm an NRA Life member. For those unaware, NRA-Institute for Legislative Action (ILA) runs a Conservation, Wildlife and Natural Resources (CWNR) Division dedicated to protecting and enhancing access on Federal public lands for hunting and target shooting and developing NRA's policies on national issues related to hunting, wildlife conservation and the environment. Protecting and expanding hunter access for us all is just part of its mission as there are increasing instances where the government is also trying to shut down access to recreational shooting lands. CWNR works closely with like-minded state fish and game agencies and hunter-backed wildlife conservation organizations (Safari Club International, Mule Deer Foundation, National Wild Turkey Federation, etc.) as well as federal agencies such as the U.S. Forest Service and Bureau of Land Management to keep hunters' needs and common-sense solutions out front.

NRA and SCI: Pressing Hunter Access with NPS
For years the NRA and SCI have submitted comments to the NPS in favor of using hunter volunteers over employing sharpshooters for national park land game-culling operations. The NPS, however, held that it favored using contracted sharpshooters and federal personnel partly to avoid battling anti-hunters over allowing "hunting" within park boundaries. (What anti-hunters either ignore or don’t realize is that these animals still will be culled.) Finally, according to NRAHLF.org, an NRA/SCI recommendation to use hunters to reduce elk populations in Colorado's Rocky Mountain National Park and North Dakota's Theodore Roosevelt National Park was accepted and resulted in great success. At the time, NRA and SCI also recommended the use of hunter volunteers in eastern parks.

As a result of NRA and SCI’s continued advocacy for hunters as volunteers, NPS conducted a review of the use of hunters in the two western parks. The report was released in March, about two years later—unfortunately too late to impact the deer management plan for Antietam and Monocacy National Battlefields in Maryland and Manassas National Battlefield Park in Virginia. While the report supported using hunter volunteers within NPS boundaries in other locations, NPS had already announced the management plan to use sharpshooters in these three eastern battlefield parks.

"Nevertheless, we were encouraged because the report suggested that hunters could be an effective solution for use elsewhere in the NPS system, including in eastern parks which are surrounded by denser human populations," said Susan Recce, director of NRA-ILA CWNR. "This was right in step with the comments NRA and SCI submitted years earlier. At that time, while our comments were included in the public-comment record for the deer management plan for the three eastern battlefields, our recommendation was dismissed by the NPS long before its March 2016 report was ever released."

Hope for the Future
The good news is that the NPS report did emphasize how the use of hunter volunteers in culling operations on NPS lands is a legal, cost effective, common-sense idea. Stay tuned to NRAHLF.org for more on this issue. 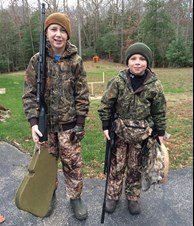 In the meantime, as for teaching my sons about the threats to hunting, rest assured I end on a positive note and the fact I'm an NRA Life member. They understand anti-hunters have a mission to end all hunting. They also understand that the NRA has a mission: to protect hunting for future generations, instill the need to carry forward the torch and pass along the positive message about our hunting heritage.