Arby’s New Venison Sandwiches Sell Out in One Day!

In case you missed the article NRAHLF.org posted Oct. 20, not only did the Arby’s food chain just launch a national “It’s Meat Season” pro-hunting ad campaign, it is debuting a venison sandwich for a short time in select cities this week. But if you were set to order the new menu item in the campaign kick-off city of Nashville, Tenn., you may be out of luck because one Arby’s location is already sold out!

The news reached us from the Tennessean in Nashville, which, as a part of the USA Today network, told the nation the Arby's on Rosa Parks Boulevard sold out within the first five hours. Tennessean food columnist Jim Myers wrote that the promotion was set to run through Nov. 3, but the venison sandwich is so popular that, 250 sandwiches later, the promotion at this particular location had already come and gone.

When I called Myers, he was enthusiastic. “Even though the campaign is geared toward hunters and other people who already enjoy venison,” he said, “this goes beyond just hunting. Venison can be tasty so people who are looking to try it now have the opportunity”—except that the low-cholesterol, high protein venison sandwiches are apparently too good to last! 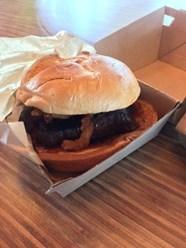 The campaign moves to Atlanta later this week so if you’re in the vicinity, get in line early. As Myers' article noted, some customers drove more than an hour for a sandwich. Otherwise, you’ll have to drive to an Arby’s in Wisconsin or Minnesota, which are up next.

The venison, by the way, comes from Down Under, which sells free-range, farm-raised red deer from New Zealand as the USDA does not permit the sale of wild-harvested animals. Considering the success of the Arby’s campaign, if they bring it back for round two, maybe a local supplier of farm-raised venison will be up next.

As for a description of the new Arby’s menu item, Myers said they consist of 5.5-ounce cuts of top and bottom round steak—not bad for a fast food chain. They are seasoned with crushed juniper berries and crispy fried onions on top and served with a cabernet sauce. He gave it “five out of eight antler points.” It says a lot when you can impress a food critic!

We American hunters are pleased about the Arby’s campaign and always look forward to sharing with non-hunters just how tasty venison is. And they are certainly welcome to join us in the woods this hunting season. If you’re reading this and you’re not a hunter but want to give hunting a try, talk to a buddy who is. All you have to do is ask.