It had been five years since our black Lab, Alley, died ... too young, of congenital heart disease. It’s still heart-breaking and those who have had that one or possibly two “very special” dogs in their lives know what it feels like.

But the time had come for us to get another Lab. My wife, Susie, was finally ready to take the step.

One day she announced, “I may have found a dog we should look at.” She explained one of her co-workers knew a kid who was leaving for college soon and whose mother had declared she wasn’t able to keep the dog while he was gone. Susie said the dog’s name was Casey. She was a yellow Lab and was almost a year and a half old.

We debated the idea of adopting a dog that age, knowing that dogs can develop bad habits quickly and that Casey’s owner was not a hunter. The time came for us to meet Casey.

We rang the doorbell. There was no loud barking or growling. We were invited in and got our first glimpse of Casey-Lynn Little Amber.

She was a little reserved but warmed up quickly to the new folks in her living room. Casey was a good looking dog, with an interesting strip of darker amber-colored fur down the length of her back. What stood out, along with her athletic build, was her keen, intelligent eyes that, once she was relaxed, looked me straight in the face.

It didn’t take long for us to agree to adopt Casey. Arrangements were made for her to be at our place a few days later. Casey was well-behaved, easy-going and we all adjusted quickly.

Shortly after the transition, we started on a slow regimen of workouts to see what commands she knew and how she’d respond to the basic obedience calls. Overall, she was pretty good. What was obvious from the start, however, was that she liked the water and applied all her athletic prowess, whether she was fetching bumpers or just sticks in the water. I actually had bike riders stop to watch her launch herself off the bank, asking if they could see her do it again. She was great to watch—and physically fit, energetic and graceful, too.

Duck season arrived. We were eager to join my buddies in the sloughs around the edges of the Boise River. Casey was excited but under control as we started our day at the pond downstream from the slough. Casey got a couple of easy ducks. The retrieves weren’t perfect, but they were good.

As the morning progressed we moved back into the smaller blinds along the slough, in the back of the property. The blind’s walls were higher and there were no dog seats to allow her to see incoming or falling birds. Not the best planning on my part, but she knew why we were there and stayed alert.

The brush and vegetation around the slough was thick with deep tangles, sometimes requiring lengthy searches to find the birds we had knocked down. Mid-morning, a pair of drake mallards circled to the calls and started to brake on their third pass. As their wings cupped over the open water, our buddy on the right took the closest bird. It fell with a satisfying plop, right in the middle of our deeks. The other one, of course, flared and I finally took it at the edge of the water where the tangles got bad.

Bird one was an easy pick and was laid on the pile with our other birds. Number two, however, only was marked by the highest brush on the far end of the pond, where it had gone out of sight. I told Casey there was a dead bird … and we began our search for the missing mallard. 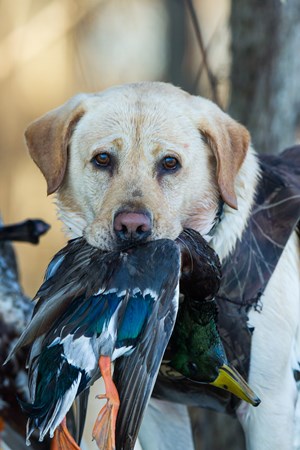 We looked high and low, far and wide. We pulled up branches, we stuck sticks under overhangs. We searched in ever-larger circles and we worked on a cross-hatch pattern. We got help from our buddies. Finally, I was beat and went back to the blind for a break. Casey, bless her heart, made it clear she wasn’t done yet and kept looking.

I was content to let her do that. The place we hunted was private property and it was a safe place for her to wander. We had coffee … and a doughnut … we talked ducks, and steel shot; we laughed at leaking waders and how our buddy, Paul, had tried to wade across the slough at the wrong place a few weeks earlier and completely filled his waders. The ducks were taking a break, too, and we sat for 20 minutes just enjoying the setting and the company. But it was time to go.

We packed up the gear, loaded the ducks in our carriers, picked up the empties and stepped out of the blind … only to see Casey walking slowly up the path behind the blind—with a brilliant spot of reflective, iridescent green shining from the mallard she held gently in her mouth.

I couldn’t have loved her more than at that moment. She had a hunter’s heart and proved it that morning by never giving up, finding a bird against all odds and making me feel so darn blessed to be given a chance to be partners with such a special dog.

She was a natural.

Such special experiences, such enriching interactions with the trusting, bigger-than-life, loving spirit of a hunting dog, are among the things that connect hunters with nature. It is these interactions of the soul that in large part account for our drive to be part of nature and for our commitment to conserve it.