A couple weeks ago, Jeff W. (full name withheld on request) saw new friend requests on his Facebook page go through the roof. He added some friends, but deleted most of the requests because they appeared to be fake accounts. Apparently, he shouldn’t have taken any of these requests.

“I’ve been on Facebook for several years,” says Jeff W., a lifelong hunter who specializes in predators, “and I’ve never been reported to Facebook for my hunting photos. But after I got this slew of new friend requests? I’ve had six of my pics reported to Facebook for supposedly having ‘violent content.’ I’m just assuming some of these new ‘friends’ of mine are behind this. But I think it’s a pretty solid assumption.”

Greg Ray, the National Manager, Sales and Program Support for the NRA’s Hunter Services Program, is getting between four to 10 new friend requests daily. Most of these requesters have the same MO: new Facebook accounts; no mutual friends with Ray; and profile photos usually of an attractive young woman, often scantily dressed, or a guy holding a fish. His favorite? A request from a young blonde calling herself “Blerp Blarg” supposedly hailing from South Australia.

While Ray found “Blerp Blarg” somewhat humorous, he admits that the sheer volume of this onslaught has him wondering, “Why all these new requests? What’s their end game?”

Good question. My Facebook account contains a “friends list” just shy of the 5,000-friend limit imposed on individual accounts. My friends are almost all hunters and shooters. I’ve received only a handful of friend requests recently from obviously fake accounts. But dozens of people on my timeline keep complaining of a regular deluge of friend requests, the majority of them from new accounts with no mutual friends. And more of my friends than ever are being reported to the Facebook Powers That Be for their “violent” hunting pics. 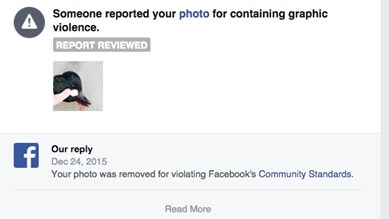 Interestingly, this surge in friend requests/“offensive” photo reports started a few weeks ago, right after Facebook announced its policy of banning private sales of firearms. A whole lot of people’s Facebook pages with gun content simply disappeared. Meantime, a good number of my Facebook friends reported that hunting and shooting groups they belonged to were similarly deleted off the face of Facebook.

Facebook staff, though, has a problem in going after those users they deem unacceptable: Facebook’s own popularity. By the end of 2015, Facebook reported 1.6 billion active users each month. How to police such a vast number of social media users?

The New York Times (NYT) had the answer. In a Jan. 29, 2016, article regarding Facebook’s ban on private gun sales, The Times noted that, “Facebook said it would rely on its vast network of users to report any violations of the new [private gun sales] rules, and would remove any post that violated the policy. Beyond that, the company said it could ban users or severely limit the ways they post on Facebook, depending on the type and severity of past violations.”

It looks to me like there’s a move afoot by anti-hunters and anti-gunners to ID hunters and gun owners then report us to Facebook as violating various policies—violations we are not committing but which can result in us being banned from Facebook nonetheless.

What do those of you with Facebook accounts think? Is there some sort of social media jihad being waged against us hunters and shooters and Second Amendment advocates? Let us know.