Kansas hunters have the power to protect their right to hunt and fish on Nov. 8 by voting "yes" in support of the Right to Hunt and Fish Amendment. Here's the scoop on the amendment along with some historical background.

On July 8, 1777, the people of Vermont wrote a line into their state’s constitution that would impact hunters nationwide centuries later. The line simply stated “that the inhabitants of this State, shall have liberty in seasonable times, to hunt and fowl on the lands they hold, and on other lands not inclosed (spelling taken from original Vermont constitution).” Prior to 1777, colonial charters such as the 1641 Massachusetts Body of Liberties also made note of the people’s right to hunt. Today those rights are under attack as never before, which has led the NRA Institute for Legislative Action (NRA-ILA) to lead the charge in making hunting a constitutional right in states across the country.

"NRA has spearheaded Right to Hunt constitutional amendments for more than a decade and has been the leading force in protecting the rich hunting and conservation heritage that will blanket America for generations to come," said Lacey Biles, director of NRA-ILA State and Local Affairs. 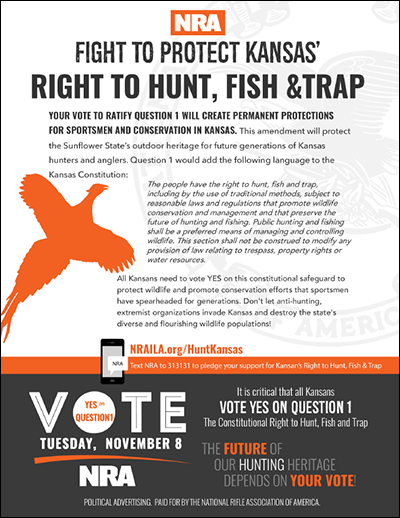 “The citizens of this State have the right to hunt, fish, and harvest wildlife, including the use of traditional methods, subject only to statutes enacted by the Legislature and regulations adopted by the designated agency [or ‘fish and game commission’ or state-specific term] to promote wildlife conservation and management and to preserve the future of hunting and fishing. Public hunting and fishing shall be a preferred means of managing and controlling wildlife. This section shall not be construed to modify any provision of law relating to trespass or property rights.”

On Election Day 2016, Kansas hunters now have the power to institute their own RTHF amendment and make Kansas the 20th state to come on board. Of course, as American hunters know, not only is Kansas regarded as one of the top 10 deer-hunting states nationwide—thanks to its trophy whitetails—it touts a record-setting number of turkeys harvested annually, with the Rio Grande subspecies topping the list. There is no debating that Kansas is a great state for hunting, but will it ultimately adopt the RTHF?

The RTHF constitutional amendment is going through the necessary legal channels in the state of Kansas as House Concurrent Resolution 5008 (HCR 5008). On Feb. 22, 2016, the House passed the amendment by a 117-7 vote, advancing the resolution to the Senate. In March 2016, HCR 5008 went to the Kansas Senate for consideration where it received a favorable vote of 36-0. (Three of Kansas' eight Democratic senators were present but chose not to vote. One Republican senator was not present and did not vote.) The status of the resolution in both the House and Senate is listed as adjourned until Monday, Jan. 9, 2017.

However, the fact HCR 5008 is adjourned until 2017 does not mean it is on hold until then as the legislatively-referred Kansas Right to Hunt and Fish Amendment will be on the Kansas ballot Nov. 8, giving hunters in the Sunflower State the opportunity to vote "yes" and have their voices heard. A “yes” vote favors the right to hunt, fish, and trap while a “no” is a vote against those rights. The ballot language will be as follows:

'A vote for this proposition would constitutionally preserve the right of the public to hunt, fish and trap wildlife that has traditionally been taken by hunters, trappers and anglers. This public right is subject to state laws and rules and regulations regarding the management of wildlife and does not change or diminish common law or statutory rights relating to trespass, eminent domain or private property.

'A vote against this proposition would provide for no constitutional right of the public to hunt, fish and trap wildlife. It would maintain existing state laws and rules and regulations governing hunting, fishing and trapping wildlife.’”

Whether or not HCR 5008 advances beyond November is yet another reason Kansas hunters must head for the polls on Nov. 8. Unsurprisingly, the language being used by anti-hunters who are opposing HCR 5008 makes it seem as if the resolution would halt attempts at regulating hunting and/or protecting wildlife. The anti-hunting crowd is also making it appear that hunting rights are already sufficiently protected in Kansas, which is false. As NRA-ILA explains, until the Right to Hunt and Fish is made a constitutional amendment, not only in Kansas but in all 50 states, the rights of hunters, fishers and trappers are not protected.