One could make the argument that hunting dangerous game is really an exercise in potentially putting oneself in harms way. That is, of course, unless one is hunting the world’s largest land mammal at spitting distance in thick foliage. Enter Susan Hayes and her Winchester Model 70 in .375 H&H—and one cantankerous bull elephant.

After completing a 24-day safari with her husband, Bill, in Uganda with Lake Albert Safaris, Susan and Bill Hayes made the trek south to South Africa to participate in a PAC (Problem Animal Control) elephant hunt in April. Seems a group of unruly pachyderms were terrorizing the locals and raiding their crops by the light of the moon.

Susan hunted the rugged KwaZulu Natal region of South Africa with Stormberg Elangeni Safaris. For four and a half days the hunting party slugged their way up and down hills and through, up and over thick brush, tracking an elusive bull elephant that was leaving enormous footprints 2 feet in width. One would assume the animal that made tracks that big would have a hard time hiding, but such was not the case. Through perseverance and a little luck, they finally closed in on the phantom. Though they could not see him due to the dense foliage, they could hear him shifting his mass, the canopy so thick it betrayed his every move.

The Hayes hunting party finally reached a spot where they could see the bull above the treeline, stripping branches effortlessly, unaware of their presence. While he was distracted with his midday meal, the party circled around the house-like creature in an attempt to get a clear shot, but the bull moved off. An hour and a half elapsed before they caught up with the giant and got into a position to shoot. The PH raised the shooting sticks for Susan, but the angle was all wrong for the shot. In a split-second decision, before the problem elephant and shot were lost, the PH lifted Susan’s rifle out of the sticks so she could maneuver quickly and instructed her to take the shot offhand. She fired just as the bull moved. She hit it high in the lungs, a less optimal shot than intended, and the bull took off with Susan and company giving chase.

Now, an elephant's long legs cover a lot of ground in a hurry. A wounded elephant seemingly can cover even more ground even more quickly. After 1.5 miles of lung-burning hot pursuit, the bull finally slowed. Susan and her hunting party began making a large loop around the fleeing beast to get in front of him and cut him off. As they made their way to where they could intercept him, the bull stopped and homed in on them. The wounded bull was set to bring the fight to the hunters.

Unbeknownst to Susan and her PH, as they moved toward the bull, he was making a beeline straight toward them in an all-out sprint—closing the distance between them at an alarming rate, his progression louder with each step. "Watching treetops fall over from above the tree line was surreal and downright ominous," reported Susan.

The bull entered a small opening in the brush 20 feet away in a full charge—trump, trumpeting with his ears out and closing fast. Susan and her PHs took a knee and prepared for a last stand. At 15 feet Susan shot up and under the elephant’s mouth, along with the PHs in the hunting party. The elephant, finally defeated, came crashing down, lifting a choking cloud of dust. As her PHs instructed, Susan didn’t waste any time paying the insurance, putting one more in the elephant’s head. The problem bull had been dropped, no one was hurt 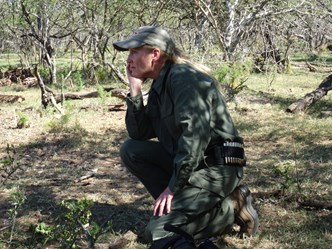 and an entire village would be fed. An eerie silence fell over the area. It was over, the ordeal reading like a Hollywood action movie script.

Susan and John Hayes are avid hunters and have set out to hunt as much of the world as possible. The California residents are both deeply involved in the NRA, serving as members of the President’s Founders Club of the NRA Hunters’ Leadership Forum. Susan also serves as a Trustee of The NRA Foundation and is a member of the Executive Committee of the NRA Women’s Leadership Forum. They say in order for bravery to prevail, fear must be present. Susan is a brave woman in no uncertain terms. On her first elephant hunt she gets treated to a full-blown charge. Luck of the draw? It goes to show that one must always be prepared for the worst when hunting dangerous game. Elephant, up close and personal, promises the inevitability of danger.