How Apathy Can Destroy Our Hunting Heritage

As we close the book on 2016, New Year's Day marks a time for reflection and renewal. Clearly, we gun owners, hunters and shooters owe a debt of gratitude to the NRA for its eternal vigilance in protecting our Second Amendment and everything that comes with it. Whether defending our individual right to personal protection or our mainstream all-American hunting and shooting traditions, the NRA is nothing if not a civil rights organization grounded in freedom for all law-abiding citizens. But do some of us take the NRA for granted for the simple fact it is always there?

Have you ever wondered—really wondered—what would happen to our cherished hunting traditions and our guns if there were no NRA? A Sporting Classics Daily article, "The Day They Took My Guns," posted a few months ago sheds light on just that. Author Gene Hill invokes a keen sense of sadness as he reveals a poignant scenario that could come to pass if there were no NRA to stand up and fight for us. Not only does it show there would be no hunting and no firearms, but it reveals what would happen to our renewable wildlife resources. As we hunters know, without guns and hunting there is no wildlife conservation.

Here is the text from the article linked above:

Today is the day they come to take my guns. I thought I’d write something about the way I feel about it because, being my grandchildren, you might otherwise never get a chance to know how much so many of us cared about our guns and how deeply they represented a precious part of our lives.

Of course, the hunting has long since disappeared. It wasn’t too long after the so-called “humane societies” had seen to the end of gunning seasons that there were no more birds or animals to speak of. The whitetail deer were about the first to almost disappear from a combination of overcrowding, disease and starvation. After Ducks Unlimited was forced to close down, the breeding grounds were no longer cared for, and except for a few mallard crossbreeds and the odd farm-raised Canada goose, the skies were empty.

It seemed that once they got the hunting stopped that was all they cared about, and when the money that the hunters had contributed every year dried up so did the animals, and that was virtually the end of it. A lot of us had predicted what would happen—but we were voted out, and that was that. It was like the end of a crusade. Once the thing was over the people who felt they were righteous all forgot what the point of it was.

It seemed, as so many of us hied to say to the politicians, that the Brothers of Bambi and all the rest didn’t really care about the animals themselves; all they wanted was the end of what they thought was cruel. Now they know what cruel is—or should.

Some of the gun clubs continued for a while, and a few of us stayed on to shoot a little trap and skeet, but somehow it wasn’t the same. Crowds would come around and wave signs and carry on against us, and the simple pleasure of smelling a little powder and breaking a few clay targets was nationally shouted down as something akin to criminal.

Looking back on it, I can see how it all happened—I think. A lot still believe it was the growing criminal lobby that was at the bottom of it. And it turned out that it would be easier to stop the hunting seasons first and then make a play for the guns than the other way around—which they had tried first.

I know you’ll read about it in school, but I wanted you to hear the other side of it at least one time. You might get some idea when you see the pictures of me and your grandmother and friends with our bird dogs and retrievers.

We had some marvelous times together, especially down along the Eastern Shore. Back in the 1970s there were nearly a million geese there, and early in the season, fine flights of pintails, which were our favorites. (You ought to look up the pintail in one of your books to see what a beautiful bird it was.) And there were always the old standbys—the green-headed mallard. 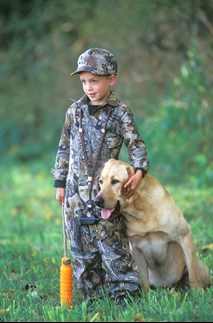 Somewhere in my stuff you’ll find a couple of duck calls—you ought to save them. I suspect they’ll be collectors’ items before too long. The one that makes sort of a quack is the mallard call, which we used most—the others are goose calls, and I think I saved a couple of pintail whistles.

I don‘t suppose you can imagine a day with the dawn storming out of the northeast and all of us dressed in six layers of old clothes, the retrievers whining softly with excitement and us crouched down in the blind making soft clucks on the calls whenever a flock of birds seemed interested in our decoys.

We’d play a little game a lot—we’d talk about having roast duck or goose for supper, and we’d take turns picking something to go along with it. Your grandmother liked things like turnips and squash—she was a Yankee—and I liked things like greens and collards (you might have to look those up!). I guess that maybe all the fooling with guns and dogs and calls and decoys and the silly arguments over how to cook a duck or goose and was beach-plum jelly as good as cranberry don’t amount to much—but things were simpler then, and we and our friends looked forward to those days as much as anything I can remember.

Well, I started to tell you about the guns. Mostly I had shotguns. But I had a few rifles that I loved and had carried many a mile from Alaska to Africa—and over quite a little country in between.

Some of my shotguns I thought were lovely—to me they were a form of art, and I liked to look at them almost as much as I liked to use them. Some were Italian, some English, some German, but most were made right here in the United States. Back when I did most of my bird hunting, we had any number of ducks and geese, as I said before, but also, right here in the East, if you can imagine it, we would go out after ruffed grouse and woodcock, English pheasant and quail.

Most of the best quail hunting was down South, and we’d go there whenever we had a chance, and we always hoped to spend some time gunning doves. We’d argue about how to cook doves and quail, too, but no need to go into all that since I don’t think you’d really understand how deeply this was a part of our lives.

Our bird dogs were named Jag and Little Ben and Tippy and Judy Pup and Daisy and even one called George, because he looked like a friend who gave him to us. I know that doesn’t mean much now either, but I just wanted you to know—for no particular reason except it’s kind of important to me just to put their names on paper.

They used to tease me a lot about how much I loved the shotguns. I guess I had more than enough, since I had one (some said two) for about every kind of hunting. You didn’t really need them all—but as I said, I liked them for a lot of reasons. There was even a time, long before they closed down the hunting, that we used to hang them on the wall the way you would a painting.

I guess there’s no great sense of going into all that now since it doesn’t mean much—just an old man meandering about something that he once loved very much, and that a part of his life went along with them on the day they took them away. I guess, to be honest, that all the songs and stories I like to remember best have come from the times spent with my friends in some gun club or hunting camp. But even to me all that is beginning to seem so very long ago.

The police are the ones that are coming to get the guns. I know they don’t like that job much either, but since there are so many funny laws now, I guess they just have to go ahead and do what they have to do.

I must let you in on a secret, unlawful thing I did. I took the guns I liked best and buried them in the field behind the barn where I used to run the dogs on quail and woodcock and pheasant every now and then. I just couldn’t stand the thought of having them melted down or thrown off a boat into the ocean. I saved a few to turn in, and I hope that does the trick. It seems that you can get away with a lot of pretty bad crimes, but if they catch an honest man with a gun that he hid away, out of sentiment, it goes pretty hard with him.

Well, they’re all gone now. The young fellow that came for them was a state trooper I used to shoot trap with every now and then. He looked through the stuff I handed over and didn’t see my old favorite trap gun. It wasn’t much to look at anyway—the checkering was smooth and the bluing pretty much worn away. And I think he took note that a few others weren’t there either, but he didn’t say a word. He’s a nice young man, and as I say, just doing his duty. I suspect he saw the fresh dirt on my boots, and I suspect I saw a small tear or two when he put my little collection in his car. I’m not sure I did, but I hope so.

With all my wishes that things may someday change,