“Hunting is conservation” was the mantra at the Houston Safari Club’s Saturday Night Gala and Live Auction last night as HSC members raised more than $600,000 in support of public education, conservation and the protection of hunters’ rights. While countless items and hunting trips were up for grabs, the auction show-stopper was the Texas Parks and Wildlife Division’s (TPWD) donation of a coveted Texas desert bighorn sheep reserve tag that went for $120,000.

The high bidder: Outfitter Nathan Olmstead of Prophet Muskwa in British Columbia, Canada, who kept the bids climbing on behalf of Texas client Hank Doris, who could not be present. Olmstead, who attended the auction with his young hunting buddy, son Lane, said he looks forward to helping the TPWD guides to help Doris pursue a magnificent ram this fall. Of course, it took me a while to reach Olmsted for a comment as fellow attendees stood in line to congratulate him—and to say thank you. As the world’s No. 1 conservationists, we hunters know where our hard-earned dollars go—toward wildlife conservation and habitat restoration and enhancement—and we’re proud of what we do.

As we listened to the bidding, which kicked off with an online bid of $65,000, most of us in the room knew the price was already too steep for our wallets. But for those who could play the game, more power to them because the HSC was giving 90 percent of the funds to Texas Parks and Wildlife for desert bighorn sheep program. My husband, Phil, and had I interviewed the guides earlier that day so as we stood with them in the back of the room to watch the avid bidding, we learned that last year’s high bidder—who just dropped his 175 5/8-inch sheep on Monday, Jan. 9—was also bidding via telephone to make sure the tag went for a considerable sum.

What Does TPWD Do with the Money?
Before the auction, Phil and I tracked down the TPWD staff at their booth specifically to get that answer. The goal of the sheep program is to replenish the sheep population and sheep habitat. “We now have 11 mountain ranges with desert bighorn sheep—1,500 statewide—and believe we’ll get to 3,000 sheep, said “Froy” Hernandez, TPWD’s desert bighorn sheep program leader. “In the 1880s, we had 1,500. They were extirpated due to disease and unregulated hunting—and now we’re back to that number.” They are well on their way! 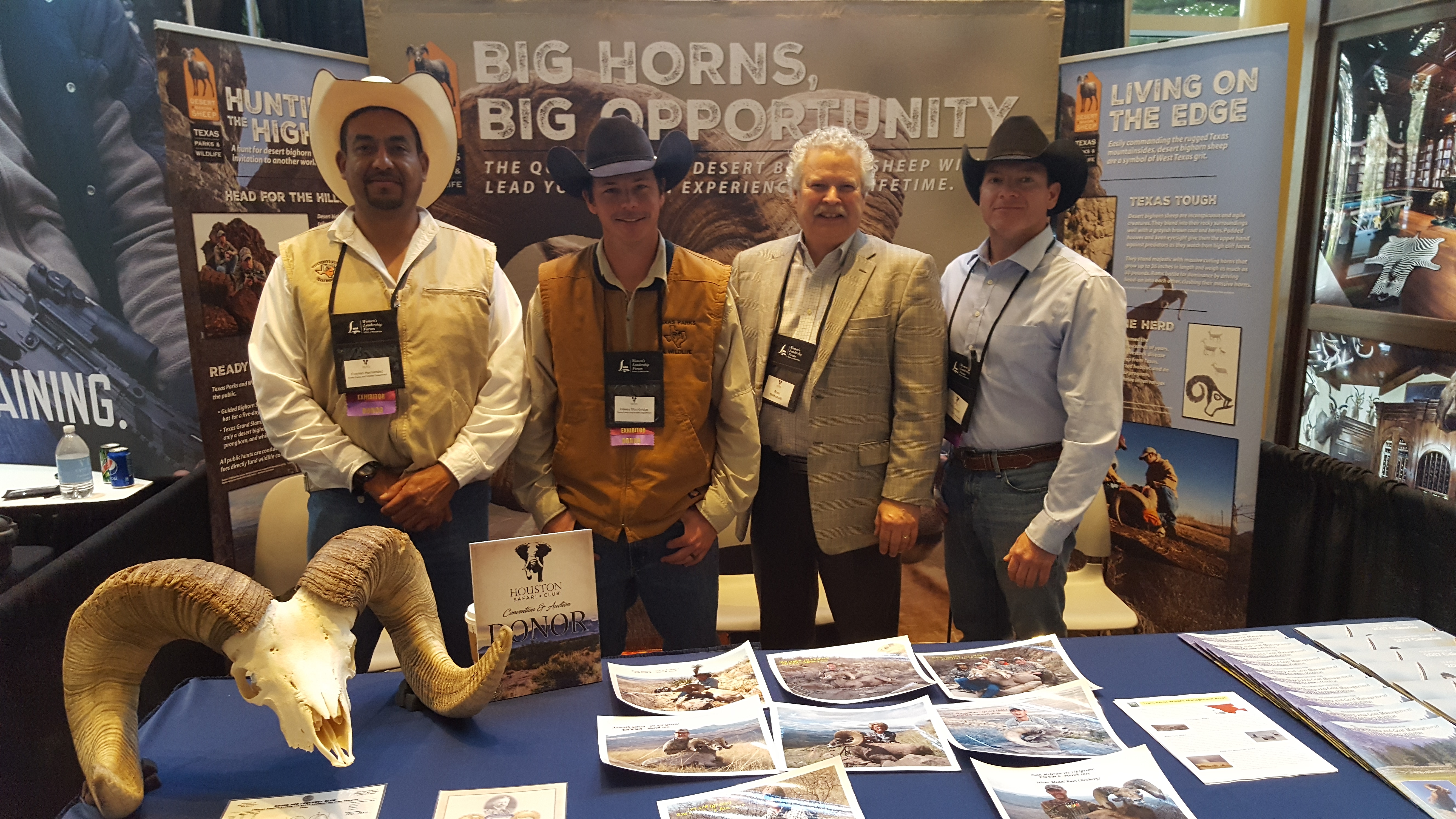 “The success story is not just a Texas Parks and Wildlife success story. Credit also goes to the HSC and other partnerships with private land owners,” said Ross Melinchuk, TPWD deputy executive director of natural resources. “Ninety percent of Texas is privately owned—and all WMAs are surrounded by private land—so we need landowner cooperation.

As noted by Hernandez, “And if they don’t do their part we can’t be as effective in working with private landowners who steward the sheep as much as we do. We allocate permits through helicopter surveys and annual counts every August. We try and do a total count by sex and put sheep in four age categories—1, 2, 3 and 4. A harvestable ram must meet certain criteria, and we leave bonus animals, knowing we can’t count every single sheep—a real success story.”

“What is unique is that you will see sheep scoring in the 160s that are 6 to 7 years old so we’re excited for the future, particularly after seeing at least five or six that easily make the record book,” said TXPW head guide Dewey Stockbridge, as I looked at a photo from the year before of past Weatherby Award and Diana Award winner Barbara Sachman, a Life member of FNAWS and SCI, and her ram that scored 176. Stockbridge explained the minimum age to take is 8 year olds and that the older age class of 9- to 10-year-olds presents a fine line. “You don’t want to lose an animal on the mountain due to old age, he explained. “The first thing I look for is the body condition—not horns and age. For an auction tag recipient, we look for the upper-tier sheep. We target 10- and 11-year-olds before they expire on the mountain.” 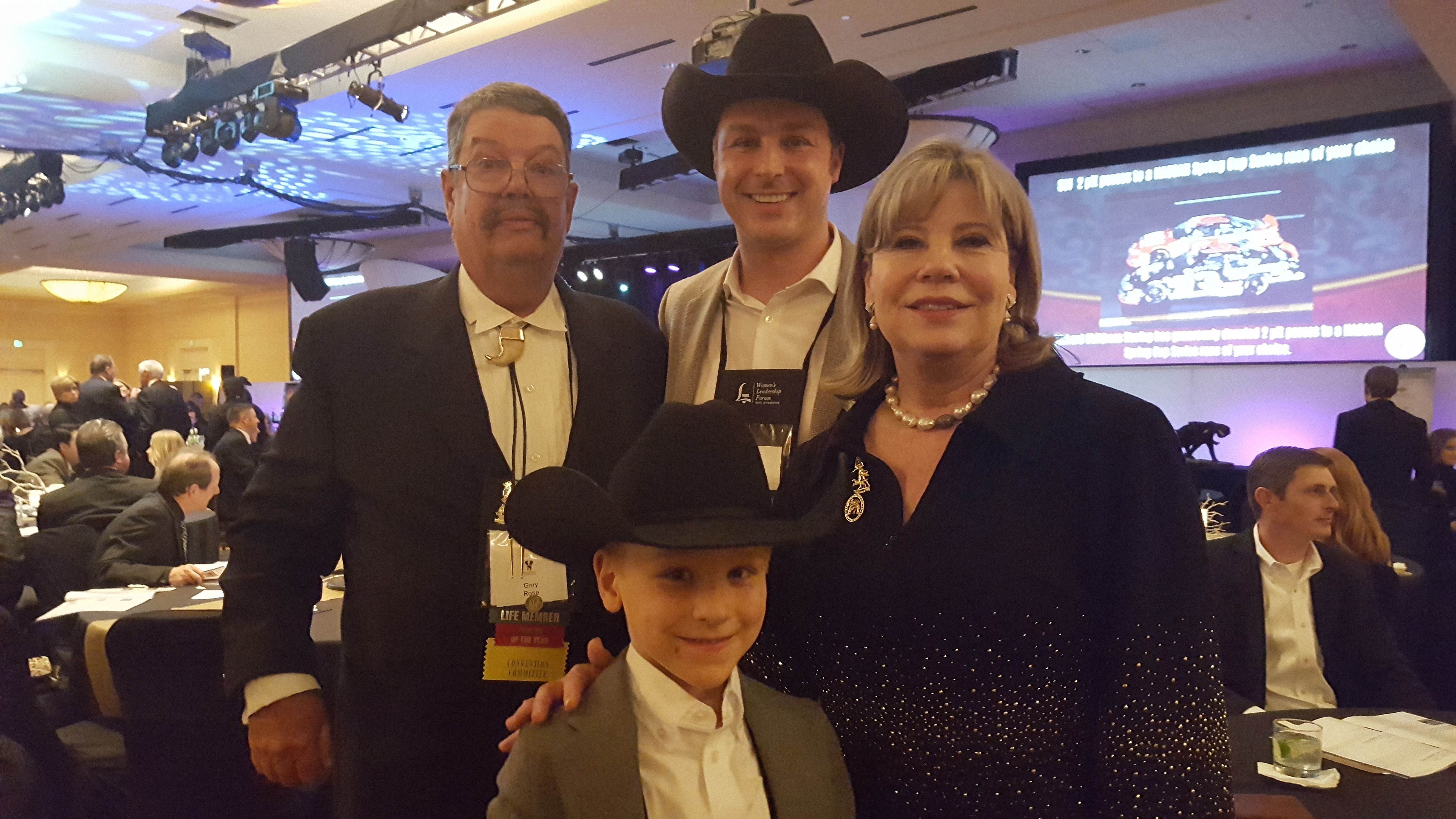 These guides have your back with 50-plus years of sheep hunting experience and only take 12 to 15 sheep per year. The three Wildlife Management Areas (WMAs) where the hunts occur include the famous Elephant Mountain, which came from a private donation of land in 1985 specifically for sheep restoration. TPWD put sheep on it in 1987 and, 13 years later, began pulling sheep off it to move to other areas, transplanting 150 animals over just the past five years. “Today, you may get out of the truck to start hiking and see a 160-inch bighorn in a group of 21 rams,” added Stockbridge. “We also removed 60 deer to alleviate browsing pressure.”

I learned the coveted sheep tag was all thanks to three noted HSC members—Melanie Pepper, Deb Cunningham and Gary Rose, who got together with the TPWD two and a half years ago, and TPWD has been donating a sheep tag for the HSC’s annual convention ever since. (The same trio has worked as part of a committee to raise $1.7 million in scholarship funds for young people since the inception of the Dan L. Duncan Scholarship Program in 1999—all part of the HSC’s mission to educate the public and protect hunters’ rights.) 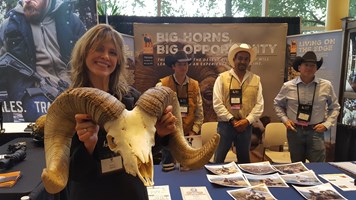 As I looked at the ram skull on display in their booth, which was found on Elephant Mountain and at one time was the state record at 180 5/8 inches, I learned it was aged at 10 years old. I also realized how amazing it is for these animals to carry their impressive horns as I hoisted them for a photo that puts their sheer size in perspective.

How to Apply for Your Own Texas Bighorn Sheep Tag
So the good thing about the evening’s tag: It was great for the HSC, the TWPD sheep program—and the sheep. By the way, sheep fans, did you know the TWPD offers the opportunity to apply for your own sheep tag for a mere $10 application fee?  Of course, about 5,500 other hunters are vying for the same tag, but just like with Mega Millions, you can’t win if you don’t play! For more details, click here.

If you win, you will be treated to your own five-day fully-guided hunt in one of the Trans-Pecos wildlife management areas. That $10 dollar fee will be the best $10 you ever spent!

The Man Who Brought Down the House
And speaking of being proud to be hunters, topping off the evening was an address from NRA EVP Wayne La Pierre, who energized the already enthusiastic group. La Pierre tapped into the fight for the soul of humanity as he announced the NRA’s communication plan to showcase and defend hunting the way the NRA has always defended the Second Amendment and our firearms.

“We face a huge fight to save hunting, and there are storm clouds everywhere we look,” said La Pierre. “We need to confront PETA and the HSUS directly, inspire hunters to be proud—we pay for conservation—and connect with America’s youth. … Truth is still truth, and humanity is still humanity. The American public is on our side. If we spark the conversation, we will win this fight and save hunting.” The power of his words resonated. After all, as La Pierre said, “the truth is the truth.”