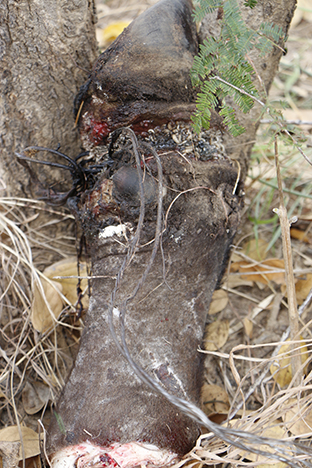 These cable snares are wreaking terrible damage on wildlife because they can remain active for years.

Here at NRAHLF.org we have been working hard to document the fact that survival of African wildlife largely depends on support from the hunting community, support that includes both funding and on-the-ground wildlife management. Using proceeds earned from hosting visiting clients, the vast continent’s hunting operators administer anti-poaching efforts. With many, if not most, outfitters participating, those companies employ, train, equip and often house the rangers who function as game-and-fish law enforcement in the African bush. The fact that these efforts have been heroically successful is evidenced by continued strong demand for safari hunting and prevalent favorable accounts from Americans and other visitors.

But confronting armed poachers is a difficult, potentially dangerous profession, as I learned during a recent trip to Mozambique to hunt with Mutemba Safaris. Principal partner, Wayne Wagner, told us about an incident where his rangers were fired upon by elephant poachers and in an ensuing exchange, one poacher was killed. It was an extreme and rare outcome, especially given that poachers face little in the way of criminal liability. Though police were immediately summoned and determined the action justified, Wagner noted that the incident rather upset the local village, home to some of men from both sides of the confrontation. Nonetheless, the rangers I met were faithfully on the job. Mutemba’s anti-poaching coordinator Anthony Marx said they understand it’s not just their careers on the line, but also the jobs of numerous others employed at the camp.

Seeing it firsthand, I came to appreciate the scale of this operation. Hunting more than 125,000 acres, Mutemba employs nine rangers who alternately work in teams on 21-day rotations. For stealth, they patrol on bicycles, scanning roads and waterholes for any sign of human intruders.

"Where hunting and commercial activity practiced by caring professionals committed to keeping poaching in check are thriving, African wildlife also thrives."During 10 days in the bush with Wagner I saw just three examples of poaching activity, markedly fewer than I have witnessed elsewhere. There were two cable snares and an elephant skeleton from which the tusks had been hacked. Surrounding it were carcasses of numerous vultures, thus indicating the elephant had been poisoned, and so too the carrion birds and likely other scavengers. Lying beneath one of the snares were weathered nyala bones, and yet the snare remained operative, possibly able to catch another victim by the neck or hoof, subjecting it too to prolonged suffering before it died.

Wagner said that while some poachers act on their own to obtain bush meat for resale, others, particularly those targeting elephants, are often part of gangs directed by headmen in larger towns or by organized criminal syndicates in Mozambique’s distant coastal cities.

At the camp I also met Khris Everatt, a researcher with the Greater Limpopo Carnivore Program. A Canadian and former bear guide, he has been studying lion populations since 2011 in adjacent national parks in both Mozambique and Zimbabwe. Presently he is in the process of collaring 10 lions, a goal that has involved walking nearly 5,000 kilometers in search of sign, the identification of area prides and untold nights sitting in blinds. Everatt told me that early on he had been finding an encouraging numbers of lions, but in the last two years, his job has gotten much tougher because he is finding evidence that poachers are now targeting lions too, mutilating them to remove teeth, paws, genitalia and sometimes taking the bones. He said this is an emerging crisis spanning many African countries, purportedly to supply Asian customers whose demand for tiger parts can no longer be met. 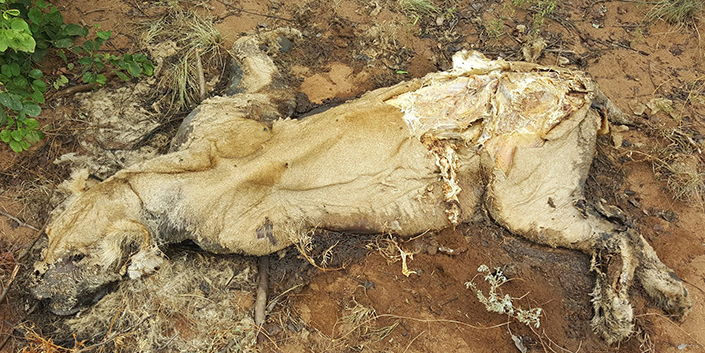 However, Everatt added that on well-patrolled hunting concessions like Mutemba’s, the big cats are now faring much better than in the parks. As a result, his organization is seeking funds to hire and equip anti-poaching rangers for Limpopo National Park.

The message in this couldn’t be clearer. Where hunting and commercial activity practiced by caring professionals committed to keeping poaching in check are thriving, African wildlife also thrives. What else can one make of the fact that fewer animals live on parklands closed to hunting than on adjacent hunting concessions?

In our safari area, we encountered huge herds of Cape buffalo, plentiful kudu, impala, wildebeest and other antelope ranging from king-sized eland to tiny suni. Among others, elephants, six different types of big cats, hyenas and wild dogs were present. It was a fantastic gameland and the party I joined from BPI/Bergara had a once-in-a-lifetime safari. This is a conservation model that works, and anyone who argues otherwise is selling out both Africa’s wildlife and the desperately poor people who live there.