A man in Union Grove, Texas, killed a 416-pound wild hog that had been causing destruction on his property for the past five years. With an estimated population of 4 million feral hogs, the Lone Star state is home to the largest feral hog population in the United States, where they are widely known to locals as pests.

Joe Clowers took the wild boar in his backyard at 20 yards with an AR-15. Clowers told the Houston Chronicle that the hog had been preying on fawns in the area. “My property lays between some populated areas and I try to maintain an environment like a sanctuary or nursery for the deer to raise fawns,” said Clowers. 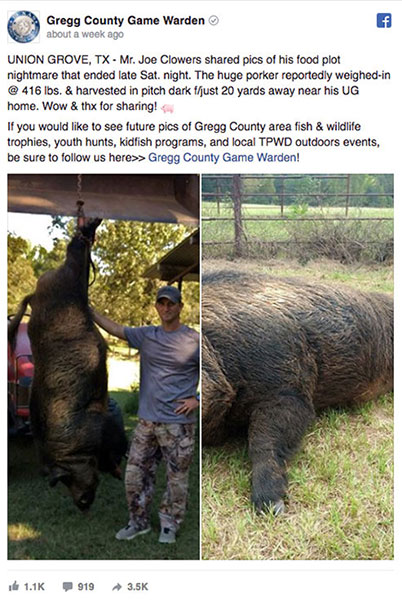 Clowers plans to hang the wild boar on his wall in a European-style mount. “He was the big daddy,” Clowers added. “I called him the bush beast.”