Part of the fun of attending the annual SCI Hunters’ Convention is that you never know who you will meet among the 20,000 hunters on the show floor. Today I am honored to say I met 90-year-old hunting legend, author and World War II veteran Chris Klineburger.

Some of you know him as the true pioneer of hunting in Asia and parts of Africa. 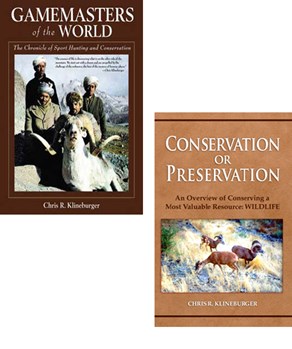 Others know him as the author of two world-class hunting books: “Gamemasters of the World”—a 770-page autobiography chronicling decades of sport hunting and conservation—and “Conservation or Preservation,” an overview of the hunter’s critical role in wildlife management following the international outcry against hunting after the taking of a lion that wandered out of an African national park in 2015. Many others know him from his epic 1960s hunting film, “The Great Shikar,” chronicling the expedition he and brother Bert made in the footsteps of the great adventurer Marco Polo as they searched for the fabled Marco Polo sheep in Afghanistan’s Wakhan Corridor—an area dubbed “the roof of the world” for its sheer foreboding environment. Still others know him as a steward of wildlife in his home state of Nevada who works with area conservation groups, regularly reaching out to non-hunters who are disconnected from the real issues regarding the sustainability of wildlife and habitat conservation. But how does SCI know him, you ask? As one of the organization’s original founders—an accomplishment dating back 45 years as SCI marks its 45th annual gathering, Feb. 1-4.

“The first SCI convention was held at the Riviera Hotel in Las Vegas and had two booths on the show floor: Bill Jeffries’ jewelry and us as Bert and I offered our hunting guide services.”

While Klineburger had been in my midst for years at the annual SCI show, we met merely by chance, thanks to sitting at the same table at an SCI press luncheon. I listened intently as this fascinating American patriot explained he couldn’t wait to join the U.S. Navy at age 17 to fight for America in World War II then he put himself through college and, soon after, he and brother Bert bought the now world-renowned Jonas Brothers Taxidermy of Seattle, Wash. Because Seattle at the time was the gateway to Alaska and Canada and international wildlife issues, he explained, “Hunters and outfitters had to pass through to head north and often stopped by to see our studio.” And one thing always leads to another.

As the Klineburgers became increasingly connected on the international scene, their operation was regarded as the world’s leading wildlife information center. “The post-World War II era truly was the beginning of sport hunting as we know it,” he said, as he walked me down Memory Lane, adding how things accelerated when British East Africa was breaking up and gave independence to Uganda and Tanganyika (now Tanzania). “One day a government rep from Uganda stopped in and we were soon partnering with the new government to launch the country’s first hunting operation,” he said. As the government invested in building more hunting camps, it asked the duo, “But how will we get hunters?” So they found themselves in the guide referral business.” Of course, the country needed assistance with field prep and taxidermy so Klineburger headed to Uganda to establish Jonas Brothers of Africa.

Soon Tanganyika asked, “How about helping us?” So Klineburger opened the world-famous Selous Reserve. “Then we assisted southern Rhodesia, now Zimbabwe, and Bechuanaland, now Botswana, but my big passion was the mountain animals—the sheep and goats.”

So this mover of mountains began working his political connections in Asia to establish wildlife programs there. As I wondered where one would even start, he explained, “Prince Abdorreza Pahlavi—the brother of the shah of Iran—was a big-game hunter who visited us in Seattle and we became friends.” He asked the Klineburgers to train the Persians in taxidermy so he could set up a wildlife museum in Iran. “So I asked if we could start a hunting program there to help sustain wildlife.” In 1965, Klineburger was in Iran establishing a hunting operation. The following year he opened up hunting in Afghanistan.

“For the next 30 years I spent time in Asia using my political connections to establish wildlife programs,” he said. Mongolia was up next as Klineburger partnered with connections there to open up hunting for argali sheep. Of course, while traveling through Moscow, he became friends with its tourist reps in 1970 and opened up hunting opportunities for foreigners in the Soviet Union.

Of course, Klineburger was friends with the king and queen of Nepal. “I opened up hunting there in 1974 and was issued hunting license No. 1.” Along the way, he worked on China, which he admits was a challenge because of its complex government agencies. “But in 1982 or 84 we had the first hunt in what is now Manchuria,” he said, “then I immediately opened up blue sheep hunting in Qinghei, pronounced “shang-hi”—you know … that sparsely populated province spread across the high-altitude Tibetan Plateau.

By the 1990s, Klineburger had accomplished feats of remarkable magnitude, all in the name of hunting to sustain wildlife. Yet we American hunters are viciously under attack by anti-hunting extremists. Fortunately, NRA, SCI and like-minded organizations, clubs and associations comprised of millions of American hunters are in this fight together, and we will win it. Not all of us can affect change on the scale of Klineburger, but each of us can work to educate the public on where hunters’ dollars go.

Chris Klineburger’s story is the story of wildlife conservation—the story of hunting. His epic life’s journey is even more impressive for someone who grew up in Arizona on the U.S./Mexico border during the Great Depression. After losing his father at age 9, he learned to hunt to help his family put food on the table. And the rest, as they say, is history.

P.S.: As for Klineburger’s solid gold bolo tie featuring the beautiful ram’s head and his gold watch adorned with a ram’s head on each side of the watch face, don’t feel bad if you can’t afford to buy them for yourself. After all, there was an advantage to being able to buy gold back in the day when it sold for a mere $35 an ounce!