Most serious poachers know exactly what they’re doing and make every possible attempt to not be caught. The poacher in this story admittedly did a great job of hiding all evidence. He thought of anything and everything that could be used as evidence of his poaching except one small item.

Early November is a magical time of the year in Michigan. The rut is on and a lot of hunters are either archery hunting for deer or looking forward to the firearms deer season opener. Many are anxiously planning for the big day. Most people wait. Unfortunately, some cheat and start early.

One year, I received a call about someone who shot a deer with a gun during archery season. The callers—a father and daughter out bowhunting—told me that they heard a loud shot on their neighbor’s property followed by an ORV drive up and thought they could see someone loading a deer on the machine. The only problem was that I was almost an hour away and it almost dark.

I asked them if they could stay in woods to listen and watch for clues until I arrived. “Heck yes! Sure we will,” the father said. Just after dark, I pulled up to the woodlot where the complainants arranged to meet me and listened as they gave me further details of what happened.

They showed me where they thought the poacher was when they had heard the gunshot. Sure enough, I found blood, deer hair and a spent 12 gauge slug casing nearby. I found the ORV tracks and followed them about half a mile to nothing—the tracks disappeared when they got near the driveway of an old house—a sure sign that the poacher left in a vehicle.

I knocked on the door of the old farmhouse. An uncooperative homeowner answered the door. The homeowner was not cooperative making it difficult to get any information. “No one was here hunting, I know nothing,” was the only thing he would say. Reaching a dead-end, I took a chance and said, “Oh okay, there’s probably no poaching or problems, but what are your sons’ names?” He reluctantly gave me two names. I thanked him and drove down the road. I called dispatch and had them run the sons’ names. One son lived three hours away and the other about an hour away.

I sped to an address in southern St. Clair County and knocked on the door of the home where one of the sons lived. A female answered the door. When I asked to speak with her husband, she told me that he was in the shower. I said that I would wait. Soon the husband emerged all clean and dressed. I looked at his hands for any blood but he must have done a good job washing—not a drop of blood remained.

We talked, him being guarded and confident that he did not shoot a deer. At this point, I was starting to second guess myself. “Okay, can I have a look in your garage?” I asked him, hoping to find an illegal deer. The suspect obliged and opened the automatic garage door. No deer.

I looked at his truck and it hit me. It was still wet from what appeared to be a very recent car wash. “Mind if I look at your truck?” I asked. “No go ahead,” he said. I checked the truck closely and was about to give up and believe his entire story until I spotted one single deer hair caught in a crack in the bed liner. “Oh, here is a deer hair,” I said. The suspect corrected me and told me the hair was from his golden retriever. I showed him how a deer hair is hollow for insulation in cold weather and how it will break when bent and a dog hair will not.

A few more minutes of conversation led to the suspect confessing. He had poached an eight-point buck, picked it up with an ORV, loaded the deer and ORV into his truck and left his dad’s property. Apparently, after I left his father’s house, he called his 34-year-old son and told him I was after him. The poacher then drove the buck to Lapeer County, threw it in a ditch, drove to a car wash to wash out any evidence and showered to wash away any blood on him.

This young man went to extreme measures to get rid of the evidence but thanks to the ethical father and daughter witnesses and some intense investigation, I was able to crack the case. It was very rewarding to win this type of battle, but one wonders how many times the bad guys get away with crimes.

About the Author
The love and admiration of nature is what led author John Borkovich to become a wildlife conservation officer, dedicating himself not only to enjoying and respecting our natural wildlife resources but also to protecting them. John graduated with honors from Michigan State University in 1980 with a bachelor's degree and assumed his role as a Michigan conservation officer in 1985. A firearm instructor and member of the state Department of Natural Resources’ Firearms Transition Team, John went on to serve as a field training officer for conservation officer recruits and an instructor at the Conservation Officer Police Academy at Michigan State Police (MSP) headquarters in Lansing. He became an adjunct professor in the St. Clair County Community College’s criminal justice department where he developed two course curriculums and taught its Conservation Law Enforcement and Environmental Law Enforcement classes. 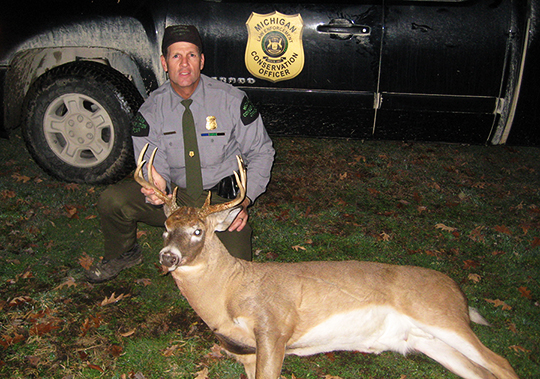 John’s many awards include being named Shikar-Safari International’s Wildlife Officer of the Year (previously awarded to his brothers, Mike and Bruce) and the National Wild Turkey Federation’s Michigan Officer of the Year. He has received lifesaving awards, safe driving awards, recognition for his "Fit for Duty" performances and has been recognized by the MSP and the St. Clair County Sheriff Department. John currently serves as a police officer for the Yale and Lexington Police Departments.

Editor's Note: NRAHLF.org is pleased to announce the arrival of John Borkovich’s new book, “Wildlife 911: On Patrol.” To order your copy and see inside the life and times of an all-American conservation officer, please visit John’s website, wildlife911officer.com. The cost of the book is $19.95 and can be purchased through PayPal with any major credit card or by calling (810)-523-2103.