Hunkered down in the underbrush at the edge of a tiny clearing with a small aspen tree as a backrest, I wait patiently for the twittering wings and raspy peents that signify the twilight display has begun. With the reds and oranges of the sunset rapidly fading toward darkness, a mist net is strung across the little clearing. The net itself is about 20 feet wide and perhaps 9 feet tall, with nearly invisible, hair-fine mesh. Unfurling it took patience and experience and the people I’m tagging along with have both. Once set, the scene looks a bit like a shadowy volleyball court.

The whole point of the net, and the hunkering, and the patience, is American woodcock. I’m here with several volunteer banders who have done this many times before—and students from a nearby university who are about to witness this annual rite for the first time. All of us have gathered to capture some of the birds and put numbered leg bands on them to help understand the biology of migrating woodcock. 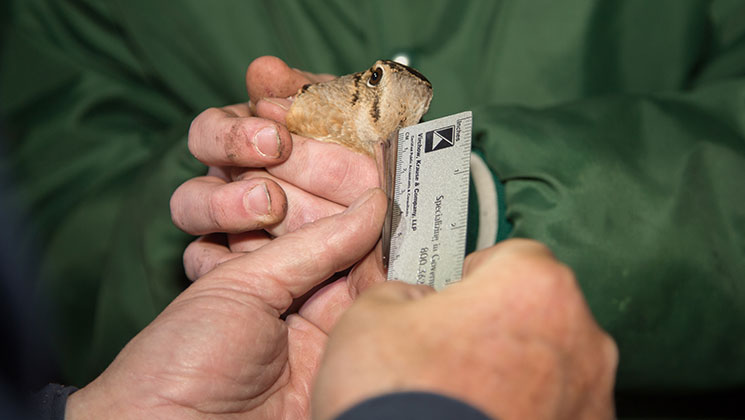 Measurements of a woodcock's bill are used to determine sex.

The best way to capture them is to net them during their spring courtship displays. The males are very territorial and underneath the netting researchers play the electronic call of a rival male woodcock. It causes the birds to dive at the intruder and hopefully end up in the net, there to be gently removed, measured, and fitted with tiny leg bands.

The people I’m here with, Ken Blomberg and Mike Rutz, are veteran bird hunters who have dedicated a large chunk of each spring since 1984 to catching and banding the strange little migrants with the long noses, a nasal song and stilt-like legs. Blomberg and Rutz gather at property Rutz owns in central Wisconsin, a place Rutz has affectionately named “Timberdoodle Ranch” in homage to the woodcock’s most common nickname. In fact, for more on this bird, its nickname and a few fast facts, check out this American Hunter article written by NRA Hunters' Leadership Forum Senior Editor Karen Mehall Phillips in July.

Along with Rutz and Blomberg, tonight’s festivities brings a far ranging cast of characters including wildlife management students from the University of Wisconsin-Stevens Point, a few family members, a state game biologist and her daughter, and this wayward outdoor writer. We all wait for "Sky Dance" to begin. 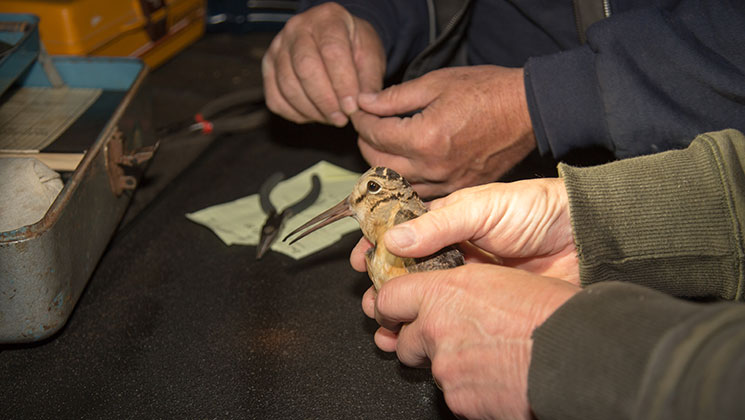 Volunteers prepare to place a leg band on a recently captured American woodcock.

"Up and up he goes, the spirals steeper and smaller, the twittering louder and louder, until the performer is only a speck in the sky. Then, without warning, he tumbles like a crippled plane, giving voice in a soft liquid warble that a March bluebird might envy. At a few feet from the ground he levels off and returns to his peenting ground, usually to the exact spot where the performance began, and there resumes his peenting."

The peenting Leopold describes is much like the sound nighthawks make as they circle overhead grabbing insects. The woodcock looks a bit like a plump, long-billed sandpiper and feeds almost exclusively on earthworms. Those worms, and freezing temperatures, are the determining factor in where you’ll find woodcock. Using their long slender bills as a deft drill, the birds need thawed, damp earth to feed. Each spring they follow the freeze line north to their breeding grounds.

The whistling sound of their flight comes from air rushing through primary wing feathers. It’s a sound autumn woodcock hunters covet. Woodcock hold amazingly tight and seem as if they were designed for hunters with setters and pointers. Indeed, another way they are captured for springtime banding is by using pointing dogs and a long-handled landing net. This technique works especially well for banding newly hatched chicks.

American woodcock (there are European woodcock too) are found only in the eastern United States and Canada and each fall they are pursued by a small but intensely dedicated group of upland hunters, many of whom would rather chase woodcock than anything else on Earth. These sportsmen and sportswomen may even “follow the flight” as migrating woodcock make their way from northern breeding sites back to wintering grounds along the Gulf Coast from east Texas to Florida, and in southern Appalachia.

It doesn’t hurt their appeal that woodcock are often found in close proximity to ruffed grouse, making them part of the classic upland hunter’s mixed bag. Golden Age writers like Burton Spiller, George Bird Evans, William Harnden Foster and others devoted countless words, and countless miles, to the pursuit of the grouse and woodcock duo.

But the population dynamics of woodcock are mysterious and that’s why we’re banding birds on a coolish May evening in central Wisconsin. Every once in a while a banded woodcock is harvested in the fall or recaptured in the spring and the data from where and when the bird was found becomes crucial to understanding their habits and migration patterns. 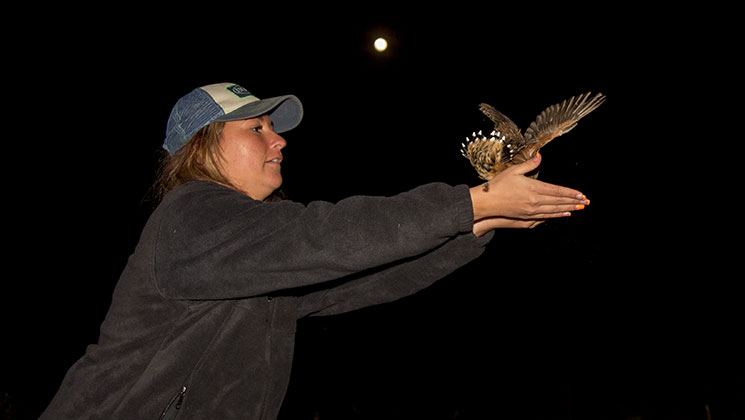 Since the 1970s, woodcock numbers have declined. Hunting seasons and bag limits have been reduced across their range, but, as with many species, habitat loss is the primary culprit in their decline. Woodcock need youngish aspen groves and wet alder edges with significant undergrowth to survive. Commercial development, declines in large scale timber harvests and the suppression of wildfires have reduced the amount of this successional habitat in the key breeding and nesting areas in Canada and the northern United States.

Several groups are working to improve habitat through a Northern Young Forest Initiative in four key woodcock regions: the Atlantic Coast, the Upper Great Lakes, the Lower Great Lakes and the Appalachian Mountains. Groups like the Ruffed Grouse Society, Timberdoodle.org and the U.S. Fish and Wildlife Service (USFWS), along with numerous timber companies, are dedicating time and resources to help the species recover. Combine that with the efforts of Blomberg, Rutz and other hunters who volunteer to band each spring, and we are learning more about the odd little birds every year ... and the Sky Dance goes on.

Author's Note: Since they are migratory, woodcock come under the jurisdiction of the USFWS and you need a “duck stamp” to hunt them. They also must be reported as part of the USFWS’s Harvest Information Program (HIP) when you purchase a hunting license.