Rising Archer Called Out for Shooting a Wolf Target

I was introduced to archery through a local NRA-sponsored Becoming an Outdoors Woman workshop hosted by the University of Maine Cooperative Extension. There were many classes to choose from, including basic pistol, wild-game cooking, map-and-compass orienteering and archery. I was looking forward to archery since I already enjoyed shooting targets with a pistol. We were given inexpensive starter bows to try and I was immediately hooked. I loved the accuracy it required, much like pistol shooting, and the silence of it made it even more enjoyable.

Once home, I drove to Freeport, Maine, to visit L.L.Bean, which offers archery equipment and training, and decided to purchase a compound bow—a BowTech Fuel. The sales representatives were knowledgeable and excited about my interest. Together we chose this bow based on its range of functions as it could be used for both target shooting and hunting, and its draw weight of 39 pounds made it manageable and fun to shoot. Also, because I wasn’t completely sure I would stay with the sport, its resale value was important to me. The shop also covered archery shooting safety with me. 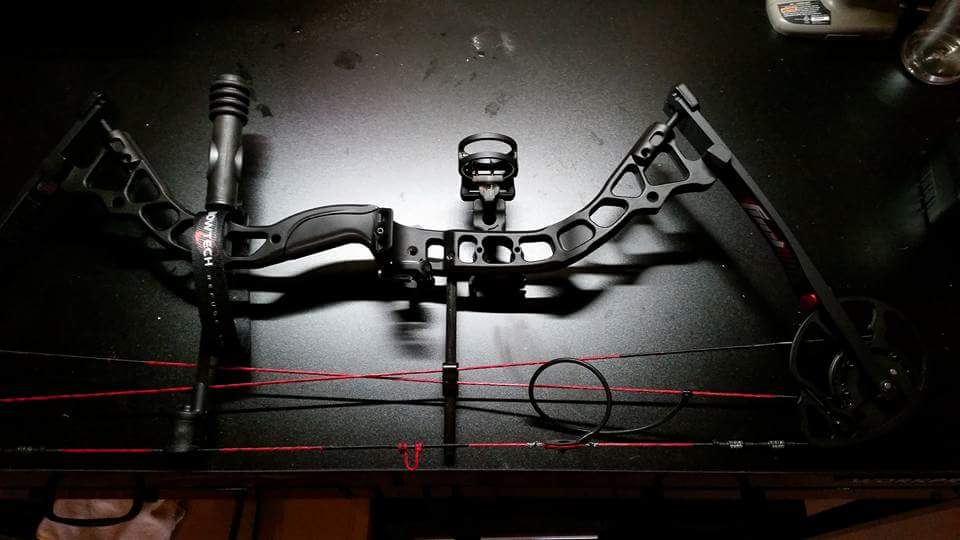 The author opted for a compound bow that could be used by either sex, just in case she didn't continue with the sport and needed to resell it. She ended up loving archery and entering competitive shoots.

I started to practice almost daily at home on a square bulls-eye target. In the state of Maine, you are permitted to target practice on land that you own or have permission to use. Originally I could barely hit the 3-foot-by-3-foot target at 10 yards with consistency. As time passed and I concentrated on my form, things fell into place. YouTube videos were my biggest teachers as the instructors share good information, though I recommend taking lessons if a local shop offers the opportunity.

After a couple of months, I got serious about competing. I first checked into indoor competitions, which consist of shooting a paper target repeatedly from the same distance, but what interested me more was 3D archery competition where the course features 3D animal targets of various wild game species positioned throughout the woods at undeclared distances. A competitor must guess the distance from the shooting stake (based on his or her division, or skill level) to the target and adjust his or her shot accordingly, mimicking actual hunting conditions. The divisions are based on the equipment you are using and if you are male or female. Since I use a stock compound bow, I compete in the Female Hunter division, which has a maximum distance of 35 yards. I have shot at 3D targets from wolves, coyotes, bears, alligators and skunks to foxes, deer, wild pigs, turkeys—and a moving mosquito—to name a few. The size of the scoring ring on each animal changes based on the target and its size. When competing in International Bowhunters Organization events, 11 points is the highest score for hitting the smallest ring. The next two rings are 10 and 8 points, respectively and hitting any other body part of the animal target is 5 points. A miss is considered a “goose egg”—a zero, and often a lost arrow. 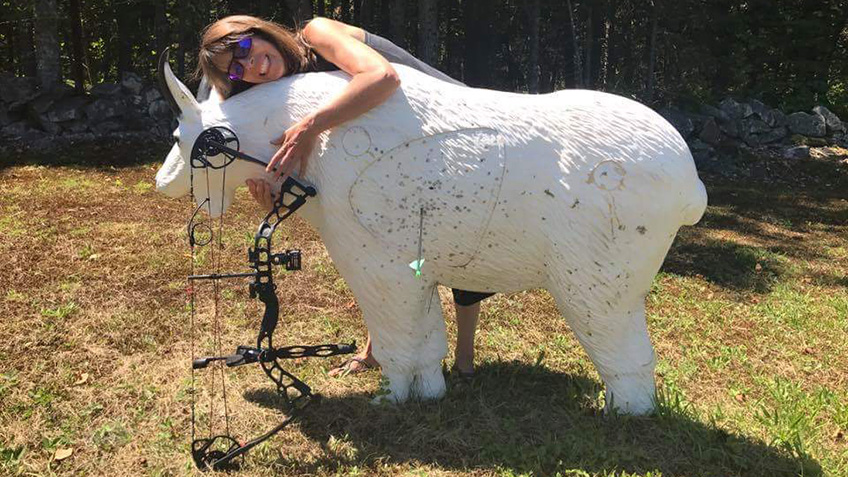 Although not a hunter herself, author Gina Snow was raised by a father who hunted and she likes knowing that if she ever wanted to try hunting, her archery practice has given her a solid skill set to build on.

I participated in my first competition in Bangor at Old Town Archery and Survival five months after my original purchase. It was at a local club only an hour’s drive from me. I was nervous as I drove into the parking lot, which was filled with 4-by-4 trucks and men. I was a woman in a hatchback. I nearly drove right back home. As I got out of the car, I was greeted by a nice man and his son. They took me under their wing for the day and showed me the competitive ropes. I was officially hooked. My final score was far from impressive but I didn’t lose an arrow that day and it was beyond fun.

Since that day, I have competed in dozens of local competitions. While archery was traditionally a predominately male sport, note that females are the fastest-growing segment of shooters and hunters nationwide. Other new shooters will be pleased to know there is no need to feel intimidated because I have been greeted warmly at every event I have entered. The people in this sport are very helpful, regardless of your skill level. And while I do not hunt myself, all of the skills you learn at 3D shooting tournaments are applicable to hunting so it is encouraging to know that I could try hunting if I ever decide to start.

Strangely, I was recently contacted privately on Facebook in regard to my archery hobby. The person was not a friend and contacted me based on a tagged photo of me shooting a wolf target at a local 3D range. This person said she could not believe I would be supporting the shooting of wolves. She said what I was doing was perpetuating the myth of the big bad wolf. She said if I must shoot a target to please make it a deer—but only if I must. She ended the conversation by saying she was not crazed, only passionate. I replied that it was a fake target and explained that I believed in legal, regulated hunting and that my father had been an avid hunter all his life. Luckily, that ended the conversation, but I am still dumbfounded about her desire to contact me. Social media certainly has brought people we don’t even know into our lives. As the NRA Hunters’ Leadership Forum has reported repeatedly, often those encounters turn to personal threats. My actual Facebook friends are supportive of my new hobby and have said how much they enjoy my posts and photos from my events. I encourage them all to give it a try. 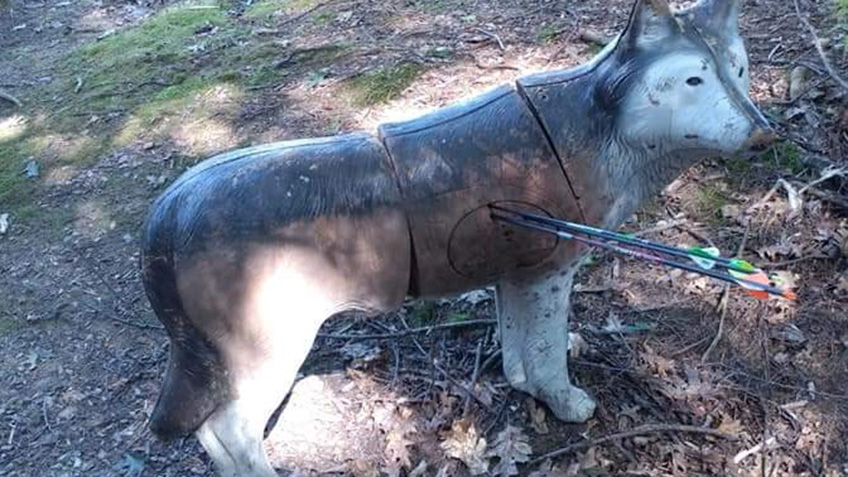 This is the 3D wolf target that prompted a stranger to private-message the author, telling her she was perpetuating the "big bad wolf" myth. The truth is real wolves are apex predators, they are opportunistic feeders and do not stay in their ample forest habitat but increasingly take livestock and pets for food and in defense of their perceived territories. As this website has reported, wolves have recovered and been removed from Endangered Species Act protections.

Archery competitions are unique. They can be as intense or as relaxed as you want them to be. The group you go out with that day will cheer for you, laugh with you and congratulate you. We search for each other’s lost arrows when needed and tally each other’s scores at the end. I have never experienced such a great group of people in a sport. The camaraderie is as addicting as the sport itself.