It has been said—by someone much wiser than me—that there are two types of places in the United States: places with wild hogs, and places that will have hogs. As reported on NRAHLF.org, this epidemic that has swept across the nation has been going on for some time now. Wild or feral hog populations particularly in Texas and Florida have swelled over the last decades and have wreaked havoc upon agriculture. They also compete with other game species for sustenance and breed like rabbits—or hogs rather, considering a six-month-old sow already can breed and a healthy sow can produce up to two litters per year. Unless you are a farmer, this may or may not be good news for you. How so? It’s simple. Where feral hog populations are prevalent, they can be hunted typically year round and without limits. This allows for good off-season practice for the hunter wishing to stay sharp in preparation for deer, elk and bear seasons, or for a hunting trip across the pond. To add to the enticement, feral hogs tend to taste good and offer a lean meat alternative for your dining room table.

Here are a few tips and tricks.

• HUNT THE WIND: Playing the wind is probably the most crucial factor when hunting wild boar. Their noses easily rival the nose of a black bear, and their above average intelligence (remember they’re reported to be smarter than dogs) makes them cautious and weary.
They are very difficult to pattern as they will quickly change their habits when they sense danger.

• Bow hunters are often the most invested in scent killers and camouflage clothing. While I have found no conclusive evidence that these products work, using them cannot hurt. Anything to mask your smell is a plus. Keep in mind that in North America, the wild hog really has no enemy, but your scent will tip them off that something isn’t right. As I mentioned before, they are smart and will not stick around to see if you are friend or foe.

• ALWAYS make sure that when you are approaching wild hogs, or sitting in a stand still-hunting them, that you are downwind of them. If they catch your scent, they will leave town in a hurry.

• KNOW THEIR ANATOMY: Many first-time wild hog hunters can make the mistake of shooting a hog too far back, thinking the hog is constructed like a whitetail deer. It is not. Its heart is much farther forward and lower in the chest than that of a deer. Be cognizant of wild hog anatomy prior to heading out to the field. A poorly hit hog can travel a great distant at an impressive speed.

• Due to the layer of fat under a hog’s skin, the hole from your bullet or arrow can plug up, stopping the bleeding and making tracking problematic.

•  The gristle plate of a mature boar, or shield as it is often referred to, can test the integrity of a bullet. I personally feel that varmint-type frangible bullets are a poor choice for wild boar as the aforementioned shield often will destroy a cheap cup and core bullet, and their dense construction puts them on a harder-to-kill level than your average whitetail.

•  What about head shots? My only issue with head shots is that a rooting wild boar is a perpetual motion machine, making a head shot easy to flub. This is why I don’t recommend a head shot to the novice hunter. The boiler room is a much safer bet.

• MINIMUM CALIBERS: With the advent of monometal bullets, such as Barnes’ Triple Shock, calibers that were considered marginal in the past are now viable hog calibers. New bullet construction is much tougher, meaning they stay together even when impacting something hard like bone. Choose the caliber/firearm you shoot best and are most confident in using. The ability to accurately place shots is more important than the size of the hole at the end of your barrel.

• SIGHTING SYSTEMS: While scopes work fairly well in low light (some better than others depending on quality), a red dot-type sight is a good option, particularly in low light (at sunup and sundown). Some operations hunt their hogs only at night. Night-vision equipment can be cost prohibitive, but there are budget options that work exceedingly well, such as night-hunting lights from a number of manufacturers. These lights make any sighting system a viable alternative as they place a source of light on your target. (Of course, always check the legality of hunting at night in the given state you plan to hunt.)

• Lastly, wild hogs have an enormous capacity to adapt. This is why they pose such a big problem in the United States. They adapt to intense heat and blistering cold with equal aplomb, and breed prolifically. So, do your part to help eradicate them, enjoy the off-season hunting practice, and put some good meat in the freezer. 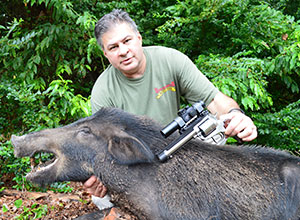 Max Prasac has a bachelor’s degree from the George Washington University and has been writing professionally since the mid-90s. Prasac is an avid sportsman and hunts with handguns exclusively. He has authored three books on revolvers and is a regular contributor of NRAHLF.org, American Hunter and Gun Digest. Prasac’s new book “The Gun Digest Book of Ruger Revolvers” is available from the Gun Digest Store, Amazon and Barnes & Noble.