The first and only time I hit a deer with my truck it was an unforgettable experience for me and for the deer, too, I’m sure. I turned a corner on a country road and a doe darted out from the ditch. I saw her in plenty of time, but the buck surprised me. I was already braking hard when I hit him, but he still bounced off the grill guard and skidded down the asphalt.

Amazingly enough, he jumped to his feet and continued his doe-chasing ways. I’m guessing he had a hell of a bruise. My pickup was also bruised. Even with the grill guard, the impact still managed to buckle the left front fender and shatter the Lexan headlight housing. It was an expensive mess, of course, and nationally it happens about 300,000 times a year, according to the Federal Highway Administration (FHA). However, many researchers believe the number of wildlife-vehicle collisions (WVCs) to be closer to one to two million annually. One FHA WVC study shared with Congress nearly 10 years ago noted that not all drivers report collisions with animals; not all law enforcement, natural resource or transportation agencies have the resources to collect detailed information on WVCs; and many animals that are injured wander away from the road before they die and are never found.

Fortunately, highway departments and wildlife biologists are teaming up across the nation, working to reduce wildlife-versus-vehicle incidents on our roads. Perhaps the most promising strategy is the advent of wildlife overpasses and underpasses. These dedicated animal crossings are heavily used by wildlife large and small when they’re placed in the right locations.

Montana and Colorado both are applying dedicated wildlife crossings with great results. According to the Colorado Department of Transportation (CDOT), Colorado has seen a 90 percent reduction in collisions since adding two overpasses and five underpasses on State Highway 9 south of Kremmling. That’s particularly rewarding to state highway officials considering that in Colorado, 35 percent of all motor vehicle accidents between 2007 and 2011 involved wildlife, with mule deer accounting for the overwhelming majority of those collisions.

Wildlife fences are used to guide animals into or onto the crossings, and then under or over the highway. Some animals, especially ungulate species like elk and moose, favor the wide open bridges like the U.S. Highway 93 “Animals' Bridge” on the Flathead Indian Reservation north of Missoula, Mont. Other species favor the tunnel-like underpasses so a combination of the two is often used. 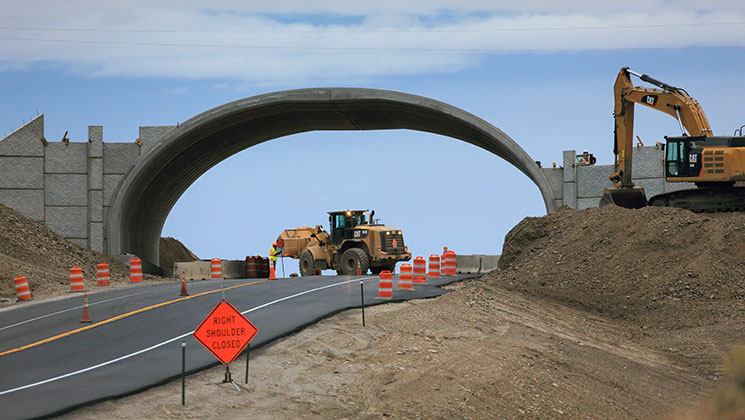 Wherever they’re built, the crossings are monitored by remote cameras to analyze their effectiveness and determine if improvements to the structures or locations are required. In Colorado, more than a dozen species regularly use the Highway 9 crossings, including deer, elk, cougars, black bears, pronghorns, coyotes, bobcats, fox and moose. (You can just imagine the damage that can be caused by hitting a moose.)

So where are you most likely to hit a large animal and a U.S. highway? According to State Farm Insurance, in 2016 West Virginia led the way in the likelihood of WVCs. The odds there were one in 41 that you would be involved in a collision. Montana was number two, followed by Pennsylvania, Iowa and South Dakota. And regardless of where you are, fall is when you are most likely to hit a large animal. November is the worst month, and, of course, dawn and dusk are the worst times of day.

As State Farm Insurance also noted, “The national average cost per claim for 2015-2016 was $3,995.08.” As I said earlier, the damage sustained to one’s vehicle during a wildlife collision can be expensive.

While most of the collisions are much harder on wildlife and vehicles than on people, an Insurance Journal report notes that there are about 200 human fatalities annually. The insurance industry further estimates that as many as 50 percent of the more minor accidents are never reported.

As the effectiveness of dedicated animal crossings becomes more widely known, more and more states will undoubtedly realize the benefits and begin installing them in key areas. The initial cost of building a crossing can be expensive, sometimes exceeding $1 million, but the states already using them have seen the costly accident rates decline so much that it looks like a real bargain in the long run. Whether you are a critter, a human or even an insurance company, that’s a good thing for all concerned. Be careful out there.

Editor’s Note: The potential dangers of encountering wildlife on our nation’s roadways cannot be over emphasized as the author reported a wildlife-vehicle collision just days after submitting this story. Fortunately, partnerships between highway administrations and wildlife biologists are continue to promote safety for humans and wildlife alike.