In this Information Age, the stories told on TV and in feature films can have a powerful influence on people’s attitudes and behavior—including telling the true story of who hunters are and why hunting is central to human nature.

In earlier times films such “Davy Crocket”, “Jeremiah Johnson,” “In the Blood” and “The Ghost and the Darkness” were the leading films of the day showcasing hunters as heroes. Mainstream films portraying hunters as heroes today are rare, with the exception of Jennifer Lawrence, who broke into stardom hunting squirrels in “Winter’s Bone” and then in “The Hunger Games” as the hunter-archer character “Katnis Everdeen.”

Then in 2016 a documentary film from SONY Pictures about hunting titled, “The Eagle Huntress,” was screened at the Sundance Film Festival. The audience gave it a standing ovation. Set in Mongolia, the 87-minute feature-length program follows a 13-year-old Mongolian girl, Aisholpan Nurgaiv, as she trains to become the first female in 12 generations of her family to become an eagle hunter (someone who hunts with an eagle) and then become the first girl to compete in a national eagle hunters’ contest. Since the documentary’s release, it has received rave reviews in the New York Times, the Wall Street Journal, NPR and Variety. 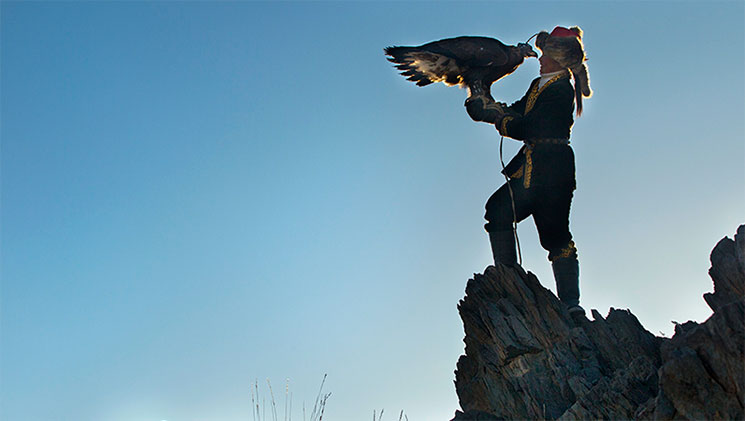 The film follows Nurgaiv’s quest, beginning with her and her father catching and training her own golden eagle, and then covering her competition against 70 men where she wins first place. Considering that golden eagles weigh up to 15 pounds and stand 3 feet tall, showcasing her physical ability to work with the eagle is a powerful story in itself. The film culminates with her eagle catching and killing a fox, which becomes part of the family’s winter clothing.

An inspiring rite-of-passage story, “The Eagle Huntress” is narrated by Daisy Ridley, the co-lead in "Star Wars: The Force Awakens." It is produced by Morgan Spurlock, who produced the fast-food expose’ “Super Size Me” and the “I Caveman” TV series. It went on to win multiple awards and grossed $3 million at the box office—truly incredible for a documentary. Available on Netflix, the film is something for the entire family.

The Place of Falconry in Hunting
Hunting requires tools. Archery equipment has been used by hunters for at least 50,000 years while the earliest known firearms date back to mid-10th-century China. Falconry is merely hunting with a different tool.

The powerful interspecies relationship known as falconry originated in Egypt, Turkey, Kazakhastan and Mongolia and dates back to at least 3000 BC. Most people know that falconers use predator birds—hawks, falcons, eagles and owls—to catch other birds. However, the right birds also are used for catching fish, small animals and mammals as large as deer and wolves when two to three birds are used.

After Mongolia, Kazakhstan and Kirgizstan became non-Communist in the 1990s, these countries sought to revive their traditions. The annual Golden Eagle Festival is held in Olgii, located in western Mongolia, every year.

Two More Films about Falconry in Mongolia
“The Eagle Huntress” joins two other outstanding films in which Americans travel to Mongolia to learn the ancient ways of hunting with eagles.

• "The Falconer, Sport of Kings"
Between 1983 and 2003, Eddie Brochin, a 5th-degree black belt in taekwondo, competed in 500 matches worldwide, winning all but 37. A seven-time Indiana state bantam-weight champion, Brochin was the North American champion in 1999. An extraordinary athlete, he also is an avid outdoorsman, hunting and fishing guide and host of the documentary series “Ultimate Outdoors TV.”

A falconer for 13 years, Brochin had dreamed for years of filming descendants of those who invented hunting with falcons and eagles. In March 2011, he flew to Ulaanbaatar, Mongolia, then took a prop plane ride, a car ride and a horseback ride to reach the tiny village of the eagle masters. 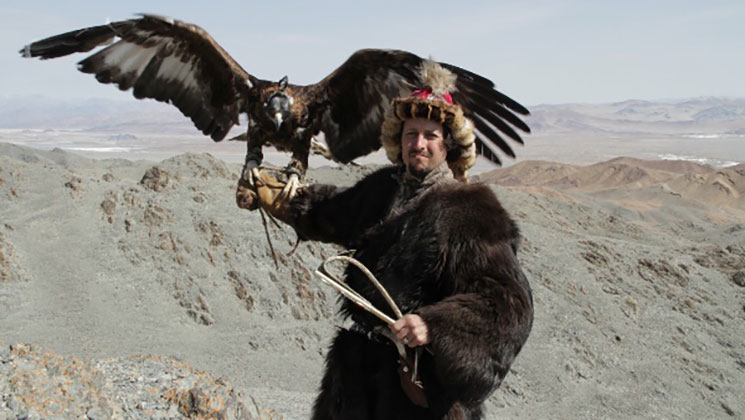 For more than a month, he lived with his Mongolian hosts, two translators and three cameramen. They lived without electricity in small, temporary structures for shelter. In that mountainous desert region, temperatures exceed 85 degrees during the day and plunge below 25 at night. The toughest day came when five tornadic dust storms hit the crew’s camp in a single day. Brochin’s resulting documentary, the 70-minute “The Falconer, Sport of Kings,” about his training in flying eagles, took two years to complete.

The award-winning film debuted at the Keystone Art Cinema on June 26, 2013, to “a packed house,” Brochin says. Since that opening, the film has been shown in a number of film festivals all over the world. In reflection, Brochin says, “As a result of a major festival win at the Madrid International Film Festival in 2014, I became a Knight of the Portuguese Royal House and since have also became a Knight in Spain.”

“The Falconer, Sport of Kings” is available online at all major retailers and Amazon Prime, Roku, Hoopla etc. (I confess that I co-wrote the film with Brochin and my son designed his website.)
• "Kiran Over Mongolia"
Every time a falconer releases his or her bird into the air, that bird makes a choice to come back. The fact the raptors return, as well as hunt with humans, is an act of pure interspecies magic. You see that natural magic in the documentary “Kiran Over Mongolia” released in 2005. It was directed by Joseph Spaid, the first American film director and producer to travel to Mongolia to film hunting with eagles.

“Kiran” is the Mongolian word for “golden,” which is used to describe the quality of especially strong spirit in a golden eagle—large, fierce red eyes, a large sharp beak and long, strong talons. 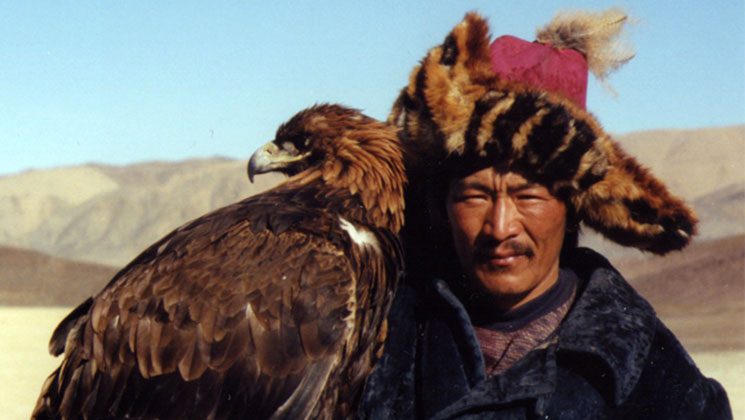 “Kiran over Mongolia” is the story of Kuma, a young Kazak man, who retraces the steps of his eagle-master grandfather to the remote mountainous region of his family's origin. There, in nomadic Mongolia, he fulfills his dream of trapping and training his own eagle. Under the tutelage of a local eagle master, Khairatkhan, Kuma learns not only the ways of hunting with eagles, but also the ways of his own people. Set against the exotic beauty of Mongolia, “Kiran” immerses the viewer in a world forgotten by time.

Described by Variety as “an engrossing walk through nature and an ancient culture,” the documentary has won awards at many film festivals. The interwoven storylines of the Kazak boy learning the ancient art of eagle hunting, while trying to figure out what to do with modern culture, are blended into a spell of enchantment that is mesmerizing on the screen. To purchase a copy, click here.
Do You Want to Learn Falconry?
Watching these films may inspire some people to try falconry. The current number of active falconers in the United States is between 3,000 and 5,000—up from maybe 1,500 in the mid-20th century.
Hawks, owls and falcons are legal for hunting in all states except Hawaii and the District of Columbia, providing you have state permits. A state's regulations are limited by federal law and treaties protecting raptors. Most states afford falconers an extended hunting season relative to seasons for archery and firearms. No extended seasons for falconry exist for hunting of migratory birds such as waterfowl and doves.
To get a permit, you must pass a written exam, serve a two-year apprenticeship with a licensed master falconer and have the appropriate facilities. Becoming a master falconer, which allows keeping up to five wild raptors for falconry and an unlimited number of captivity-produced raptors, takes seven years. Certain highly experienced masters also may apply to possess golden eagles for falconry. For more details and to confirm regulations in your state, check with the North America Falconry Association.
While Nurgaiv Aisholpan of “The Eagle Huntress” remains a noted female falconer, she certainly is not the only one. Stana Katic, the Canadian actress who played Detective Kate Beckett on the TV series “Castle,” enjoys falconry in her spare time. She says, "It gives me self-respect."
■ ■ ■

Editor’s Note: Author James Swan, Ph.D., is the co-executive producer of the “Wild Justice” TV series on the “National Geographic Channel.” Launched in 2010, the cameras follow California game wardens on patrol in the state’s wilderness areas. To read more NRAHLF.org articles by Swan, please check out the following links:

• "Game Wardens Putting Their Lives on the Line"
• "The Psychology of Hunting"
• "Meth Labs in my Hunting Area?"
• "Canis Stew: Issues Surrounding Wolves and Coyotes"