As the Labor Day holiday approaches and we get set to cook all that great wild game meat and side dishes outdoors, it’s the perfect time to share the story of FireDisc Cookers. The owners’ revolutionary concept in portable outdoor cooking all started with … a tractor-plow disc.

When you live to hunt and fish and do just about anything else outdoors, what better business can you launch than one that supports your lifestyle? And in step with sportsmen’s drive to give something back, what better way to pay it forward than by using that business to aid a charitable cause? Just ask avid hunters and Texas NRA members Griff and Hunter Jaggard. You may not know these brothers by name, but I’m betting you know their company FireDisc Cookers, maker of portable outdoor cooking products—a company they created, in part, to help find a cure for multiple sclerosis (MS). 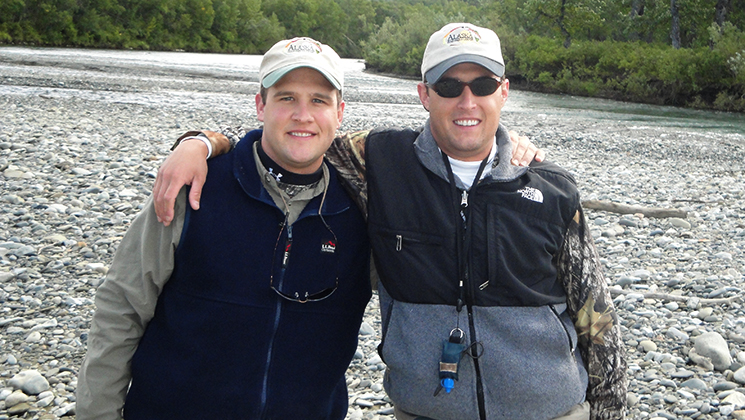 Men on a Mission
While Griff and Hunter were in college, Griff was diagnosed with MS. Instead of allowing the disease to be a deterrent to enjoying the outdoor life, the brothers opened a commercial real estate business while considering how to do their part to help find a cure for the disease. They formed the Carney Men Bike MS Team, now the nation’s largest private, non-profit cycling team that today has raised more than $1 million for MS research and assistance for those living with MS. The Jaggards’ entrepreneurial drive and wish to further support MS research ultimately led to the idea of designing a high-quality, versatile and portable outdoor cooking device on which outdoorsmen could prepare various foods simultaneously, regardless of differences in required temperatures and cooking times. For criteria, the cooker had to be optimally-sized, easy to transport, set up and take down and require minimal cleanup. And it had to be suitable for everyone from hunters, fishermen and campers to chefs and backyard grillers.

As a starting point, Hunter’s father-in-law had given them a tractor-plow disc for use in preparing large meals on their hunting and fishing trips. Considering the disc was rugged enough to cut and turn sod and dirt, the duo thought it certainly would be durable enough for outdoor cooking. They took the plow disc to local welders to consult with them on how to create a portable cooker based on the disc design. If successful, every product purchased would provide a contribution to help fight MS.

Goal Accomplished
The prototypes eventually led to the creation of the FireDisc Cooker and in 2010 the company was in business. FireDisc’s fold-flat support system and independent cooking surface stows easily in your vehicle and can be set up quickly without tools. It burns clean and its 11-gauge high-carbon steel holds in the heat—up to 20,000 BTU’s for conservative use of fuel on a 16-ounce propane tank—enabling the FireDisc to cook twice as fast as most grills. Its polished, porous steel surface could be seasoned like a cast iron skillet so cleanup entailed a splash of water and a wipe, skipping the need to scrape the cooking surface. Later refinements in design included a heavy-duty coating in black and red for a sharp look while preventing rusting in the elements. Then came ongoing field tests by chefs, barbeque enthusiasts and fellow outdoorsmen, resulting in the portable propane FireDisc Cooker models offered today: the FireDisc Deep 24-inch Short and the Deep 36-inch Tall Portable Cookers with walled discs and 24-inch Short and 36-inch Tall Portable Skillets. The cookers are powered by propane and a regulator/manifold assembly attached to a two-piece steel leg system. And every product sold is protected under FireDisc’s rigorous Chef-Tested/Chef-Approved quality assurance program. 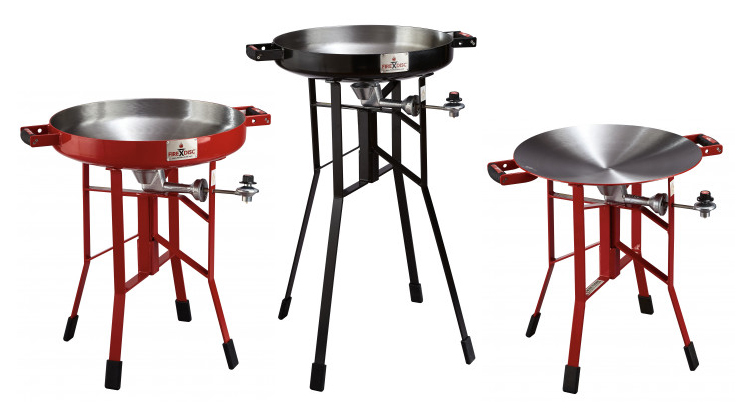 As for what motivated the NRA-member brothers to focus on creating a product for outdoorsmen, FireDisc President and Co-founder Griff Jaggard said, “My brother and I grew hunting and fishing with our father and friends on the weekends or when we could get away. Our involvement in the outdoors was a big part of our passion and drive to create a high-end portable and durable product that would give our customers the fortunate opportunity to experience the great outdoors.” We hunters and fishermen can appreciate that.

By 2014 the brand had expanded into 44 states. The Jaggards got out of the real estate business to focus on FireDisc Cookers, filling orders nationally and online. In expanding their pay-it-forward philosophy, in addition to raise funds to fight MS, the Jaggards use their products to raise funds for 11 other national foundations dedicated to assisting medical research and aiding those in need.

As a fellow NRA member, that same love of hunting and the outdoors is why I started an outfitting business years ago. I only wish I’d had a FireDisc cooker on hand then. And on another level, when it comes to giving back, it’s a good feeling to do business with a company knowing its origins stem from trying to help find a cure for MS. For more information about FireDisc Cookers, visit firedisccookers.com.

A Note about MS
For those unfamiliar with the effects of MS, the disease can affect your brain, spinal cord and the optic nerves in your eyes, causing problems with vision, balance muscle control and other basic body functions. Some people have mild symptoms while others struggle to complete daily tasks. My friend Travis in Alaska has had MS for years and appreciates companies like FireDisc Cookers that strive to help those in need. I am proud to say Griff and Hunter Jaggard are yet another example of hunters’ compassionate nature, whether you’re talking about voluntary donations to support wildlife conservation or doing our part to help those less fortunate.