“Boy is 9 and on the downward slide, so we had better let him out first,” said Chesterfield, Virginia’s Craig Vaughn, a 61-year-old retired fireman. At that decision and subsequent act, 3-year-old Gus howled at what (to him, no doubt) seemed like the worst kind of injustice.

For a dog reputed to grow tired easily, Boy hadn’t received the memo. The feist sprinted from the carrier to the woods and, truly, less than 15 seconds later, was yapping insanely at a squirrel he had treed. Sixty-year-old Kermit Crowder, a Matoaca locksmith, was first on the scene and deftly drew a single shot Thompson Contender .22 Silhouette pistol with a 4X Burris scope, took a rest on a tree, squeezed off a shot and the target tumbled. Boy dashed to the spot, pounced on the squirrel until Crowder arrived, then resumed his raucous race through the woods. 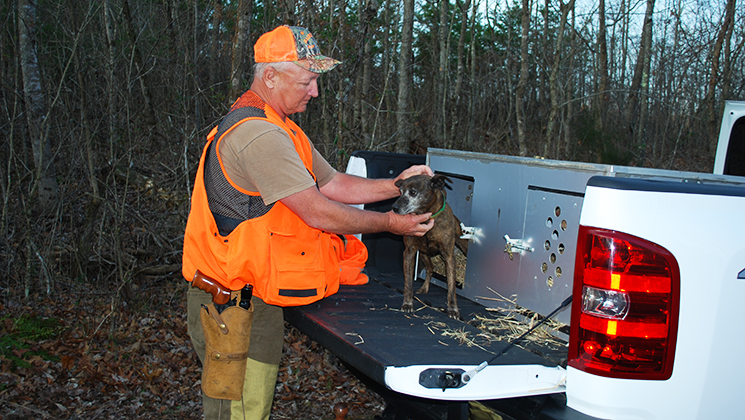 Centuries ago when Europeans arrived on these shores, they often brought their hunting dogs. Over time, dogs once employed for wild boar, roe deer and stags evolved into adroit at pursuers of whitetails, turkeys, gamebirds and, yes, even squirrels. Thus, the origins of feists like Boy and curs like Gus.

“Feists don’t range as far as curs, maybe because of their size,” said Vaughn, considering Boy is only 16 inches from the ground to his back. “And they don’t swing right or left quite as hard, either.” “Feists also seem to prefer to hunt right in front of you. On the other hand, curs will range out far away, and I feel they trail better. I’ve had curs tree a squirrel 400 yards from me. Both breeds will bark when they tree a squirrel, which is a very important trait. It’s also very important for a squirrel dog to stay where a squirrel has been treed until the hunter gets there.”

Although Vaughn prefers curs, it is really only because he has hunted with them more, he says, as breed preference is really “just a matter of different strokes for different folks.” Franciscus likewise favors curs, touting their mild manner and intelligence.

“You can hand-train curs to obey commands,” said Franciscus. “Curs want to please their masters. Gus will even mind my friends when we’re hunting.”

Crowder agreed and added, “Curs aren’t as moody, either, and they are gentler. Feists will growl at you if you grab the squirrel from them. Feists are feisty. They didn’t get their name without a reason.”

Nevertheless, I was quite impressed with Boy’s bravado and his hard charging credo. Shortly after his initial success, Boy treed another gray, and this time Franciscus’ marksmanship was evident with his semiautomatic Buck Mark Silhoutte, also adorned with a 4X Burris scope. Curious, I had to ask why all three men choose to go afield with pistols.

“At first, we tried hunting with pistols for the challenge,” said Franciscus,” only attempting head shots. But we also found that this approach wasted little meat because shots usually resulted in a quick kill or a clean miss.”

Crowder adds that high quality ammo is part of the equation for accurate shooting, as the men prefer Eley Match 22 Long Rifle for its consistency. But just as important are superior binoculars says Crowder who favors the Nikon Trailblazer 10X25.

“We’re only trying to look about 50 yards out so we don’t need big, powerful binoculars,” he said. “Half of the squirrels we kill come from us using binoculars and spotting just an eye or the tip of a tail after we see a dog barking up a tree.” 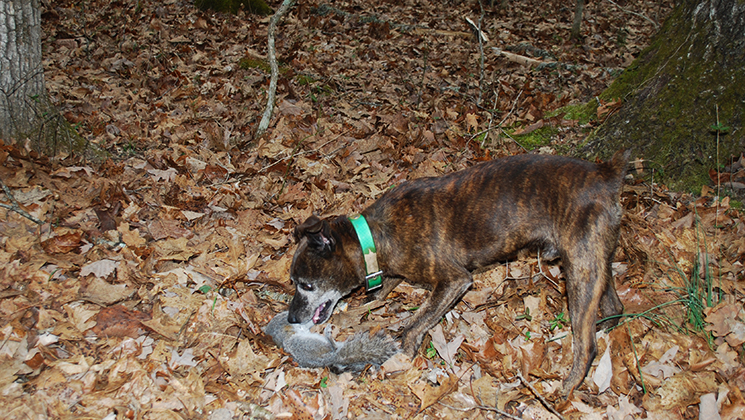 Crowder adds that the trio starts training a puppy to tree when it is eight weeks old. The men drag a frozen squirrel hide in front of a pup so it becomes used to the smell. This evolves into them dragging a hide up a tree and positioning it on a lower limb. The budding squirrel dog is praised enthusiastically when it trees the hide and barks.

As the collective hunting community works to bring new hunters into the fold, partly to ensure the future of state fish and wildlife agencies’ hunter conservation funding for their budgets, these avid squirrel hunters attest that hunting squirrels with dogs is a superlative activity to share with novice hunters, kids and adults alike. The inherent excitement of the chase, the sense of pride between dog and man and the high likelihood of wild game being brought home for the table are all appealing and add to the anticipation of the hunt.