Did you know that Oct. 13-19 is National Wildlife Refuge (NWR) Week? Each year during the second week of October, the Department of The Interior (DOI) sets aside seven special days to honor and celebrate America’s numerous lands and waters that comprise our NWR System. With at least one refuge in every state and U.S. territory, the week marks an opportunity for hunters, anglers and other outdoor recreationists to explore, share stories and take part in various special events at and near these crucial havens.

As the DOI notes, while conserving and protecting our precious wildlife heritage, wildlife refuges provide homes for thousands of species in addition to opportunities for outdoor adventure. Underscoring this fact, in 2017 this website published an article from researcher Mark Damian Duda touting that by 2015 our NWRs were home to more than 380 of the nation’s 1,311 listed endangered or threatened species. At that time, 11 of those species were removed from the list thanks to their recovery, and another 17 were reclassified from being endangered to being threatened because of their improved status. He also explained that 59 of the NWRs were created specifically to save jeopardized species, and that more than 500 listed species are now considered stable or improving in their designation.

More than 330 wildlife refuges permit hunting as a necessary wildlife management tool, preventing the overpopulation of game species and die-offs from starvation or disease. The decision to allow hunting on an NWR is made by wildlife biologists on a case-by-case basis.

For more recent news, on Sept. 18, NRAHLF.org reported that the DOI's U.S. Fish and Wildlife Service (USFWS) had expanded hunting and fishing opportunities at 77 NWRs and 15 National Fish Hatcheries—accounting for 1.4 million additional acres being opened to sportsmen. 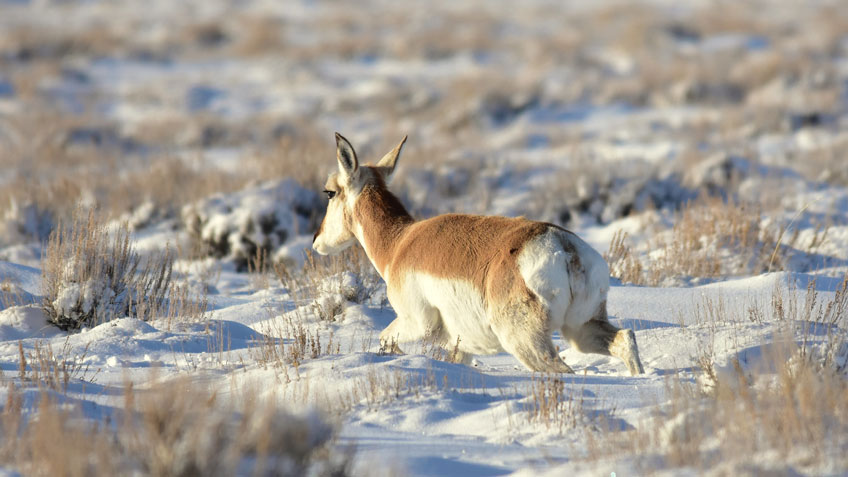 This pronghorn and the above moose were both photographed by Tom Koerner of the U.S. Fish and Wildlife Service on the Seedskadee National Wildlife Refuge, one of countless national lands and waters working to manage species and their habitat.

“This is the largest single effort to expand hunting and fishing access in recent history,” said DOI Secretary David Bernhardt in a USFWS statement. “President Trump has made increasing public access and streamlining government functions priorities of his administration, and this new rule delivers on both fronts given the unprecedented expansion of public acreage and removal or revision of 5,000 hunting and fishing regulations to more closely match state laws. This is a big win for sportsmen and sportswomen across the country and our collective conservation efforts.”

Important to note, NWRs that permit hunting also participate in America’s annual National Hunting and Fishing Day. Celebrated this year on Sept. 28, the day’s activities provide nationwide opportunities to learn more about outdoor skills and wildlife conservation. Opportunities include hands-on activities related to hunting, shooting, fishing and archery such as supervised youth hunts. In step with its millions of hunter members, the NRA continues to promote legal, regulated hunting as managed by the North American Model of Wildlife Conservation and is committed to protecting our mainstream, all-American hunting traditions.

An NRA Endowment member, Karen worked in the NRA public relations arena prior to joining NRA Publications in 1998. She is the founding editor of two NRA official journals: America's 1st Freedom and Woman's Outlook. National writing awards include being named the 2015 Carl Zeiss Sports Optics Writer of the Year. She actively promotes women and families in the outdoors. She is also a member of the Washington metropolitan area's Fairfax Rod & Gun Club, a founding member of the Professional Outdoor Media Association, a member of Safari Club International and a Life Member of the Dallas Safari Club and the Mule Deer Foundation.