August marks one year since the Ivan Carter Wildlife Conservation Alliance and the Cabela Family Foundation successfully released 24 wild lions into Mozambique’s Coutada 11, the largest wild lion relocation for conservation in African history. That historic event required capturing two dozen free-ranging wild lions, quarantining them and then transporting them by jet and finally in pickup trucks into one of the last great strongholds of African big game on the continent.

But the story didn’t end with the release of those lions. In the months that followed, those cats adapted to their new home and their new prey base, and the population of delta lions has now almost doubled. There were setbacks along the way, but the vision of the Cabela Family Foundation is being realized—and wildlife and local people are reaping the benefits. 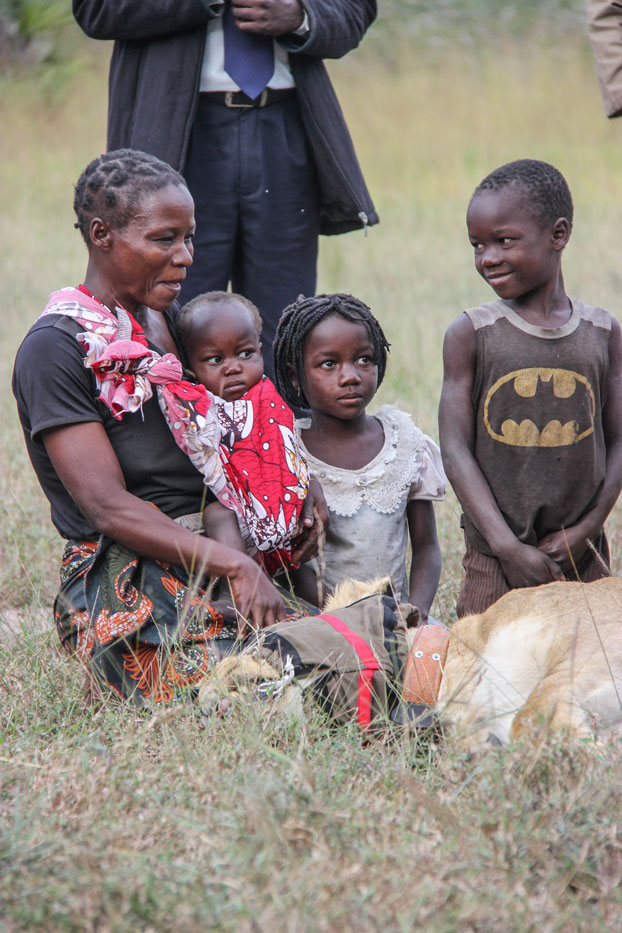 A History of the Zambeze Delta
Mozambique’s vicious civil war, which lasted from 1975 until 1992, decimated wildlife in the Zambeze Delta. Soldiers involved in the conflict shot animals for food and for profit, and the indiscriminate slaughter left the delta in ruins. The handful of local people who remained in the area throughout the conflict were driven to poaching and erected fences that served to funnel any remaining wildlife into traps and snares. The delta, which had once been the hunting grounds of legendary African pioneers like Harry Manners and Walter Johnson, was virtually devoid of wildlife by the end of the war.

In 1994 professional hunter Mark Haldane arrived in the delta in the hopes that proper game management and funds generated by legal, regulated sport hunting could return the area to its earlier prominence, but initial aerial surveys were disheartening. The delta’s buffalo population dwindled from an estimated 50,000 animals before the war to roughly 1,200, only 44 sable were located in an area spanning over a million acres, and Selous zebra were all but extirpated—only five were found.

But Haldane was undaunted, and his efforts to restore the delta are a demonstration of how properly managed hunting can help rebuild habitat and restore populations. He started an anti-poaching campaign and began hiring local people to work at his new safari company, paying them with meat from those first hunts and reducing their need to poach. Over time the game returned, and 25 years after Haldane returned, the delta is once again flourishing. At last estimate there were 25,000 buffalo, over 3,000 sable and 2,500 zebra as well as numerous other species including leopard, nyala, reedbuck and elephant. 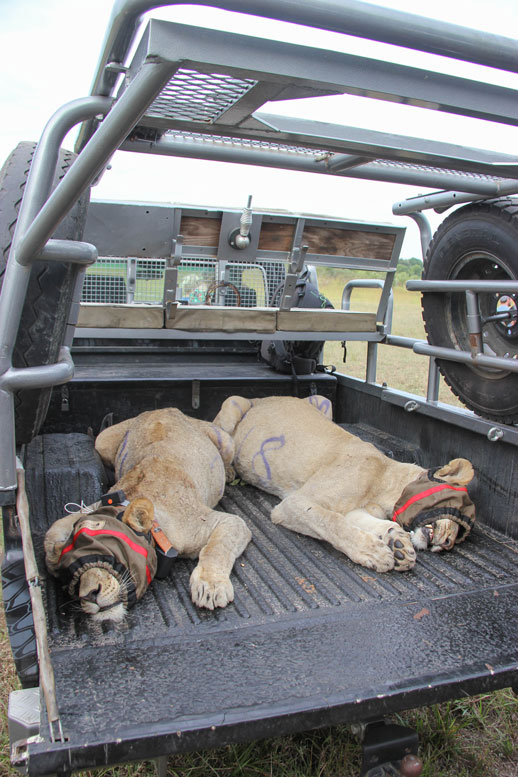 The 24 lions were sedated and masked for safety's sake during their transport.

Return of the Lions
In June 2018 I stood on the grass runway near Haldane’s Mungari Camp and awaited the first planeload of lions. When the Pilates jet touched down, a crowd of onlookers that included government officials, veterinarians, reporters and local people surrounded the plane and watched as the cats were offloaded into waiting pickup trucks. The sedated and masked lions were then transported in the backs of pickup trucks to the enclosures where they would adjust to the delta climate before being released two months later.

“I used to drive these dirt roads for hours and never saw anything,” said Kwassie Myburgh, a lifelong area resident. “Maybe a reedbuck now and then. And now look at this,” he added, pointing to a mixed herd of sable and hartebeest standing in the open plains. “It’s just incredible.”

Kwassie and I were in one of the three trucks that were carrying lions, and in the rearview mirror I watched the two masked cats in the bed of Kwassie’s pickup sleeping soundly.

Two more planeloads of lions were brought into the delta over the next week. The cats, which numbered 24 in total, had been sourced from game parks across South Africa to provide enough genetic diversity for a seed population.

Some of the cats were taken to nearby Coutada 10 to populate that portion of the delta. In August of 2018 the lions were released, the first of their species to roam the area in four decades. 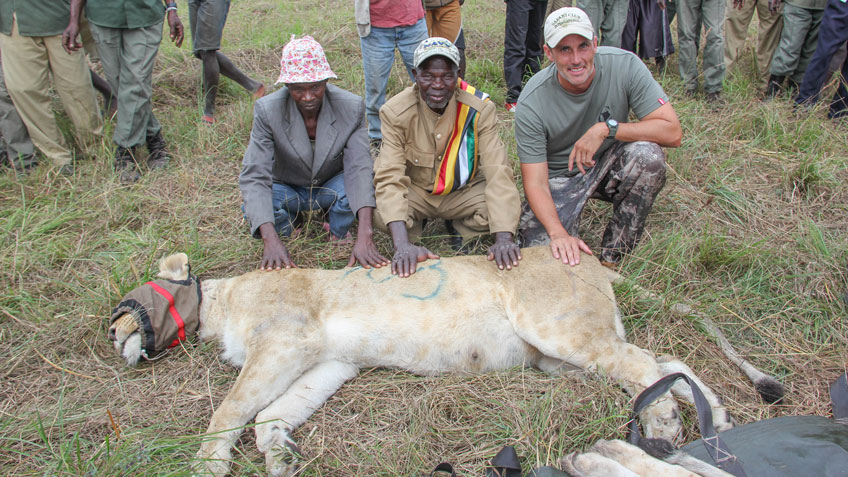 The author pauses to commemorate the translocation of lions with administrators of the Sena tribe.

Since the lions were released the Cabela Family Foundation has completed funding the construction of a health clinic in the delta, too. Prior to that, villagers had to travel almost 20 miles on foot or by bicycle for medical treatment that many of them couldn’t even afford. Haldane and the Cabela Family Foundation also provided boreholes for clean water and built and funded a local school.

The relocation has largely been a success for the lions, too. Lions favor ecotones, the areas where two types of habitat meet. Because of the abundance of ecotones in the delta (comprised of grasslands meeting forests and swamps) the area is prime lion habitat. Game is abundant so the cats have had no trouble finding food, and since the lions were fitted with satellite collars, Dr. Byron Du Preez, the wildlife zoologist who is studying the delta’s cats, could track their movements. In the first few weeks after their release, most of the cats stayed on the border between the sand forest and the delta floodplain, feeding almost exclusively on reedbuck and warthog. The satellite collars also allowed Du Preez to establish a geofence, which alerts him if any of the lions approach a village—another safeguard for the local people and a key element to reducing human-lion conflicts. There have been no lion attacks on villagers since the cats were released. 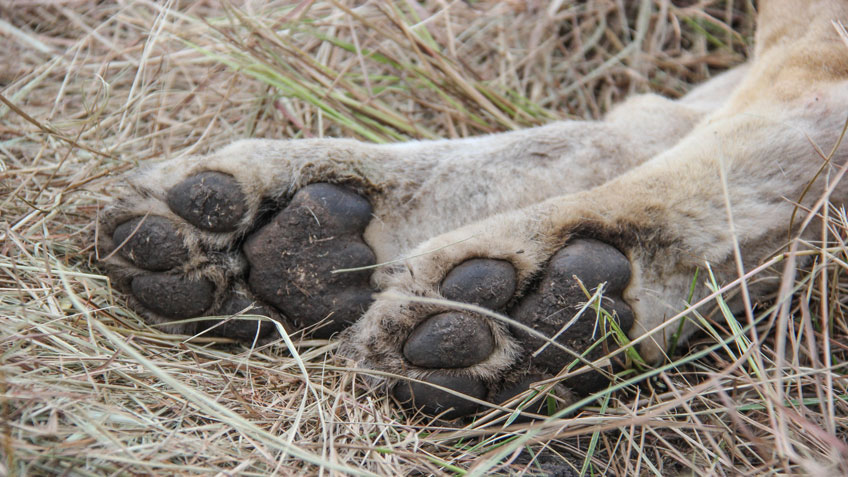 Poaching, with the exception of one incident early in the program, has all but been eliminated. The real-world fear of increased human-predator conflict has also not materialized thanks to the use of geofencing.

An Early Setback
In September of 2018 the collar of one of the male lions brought to the delta began sending out a mortality signal that indicated the cat wasn’t moving. Haldane and his team rushed via helicopter to the collar’s location on the border of the delta near a railroad line. They found the male snared and nearly dead, and despite their best efforts the cat had to be euthanized.

The poacher who snared the lion was subsequently captured and sent to prison. When the offender realized he’d captured a lion and set out to procure a buyer (lion bones, which are oftentimes sold as tiger bones in Asia and are used in traditional medicine, fetch a high price). The poacher had decided to wait for the lion to die in the snare, a gruesome and lingering end, so that he wouldn’t be injured by the cat. The man was waiting for the lion to expire when he was captured. 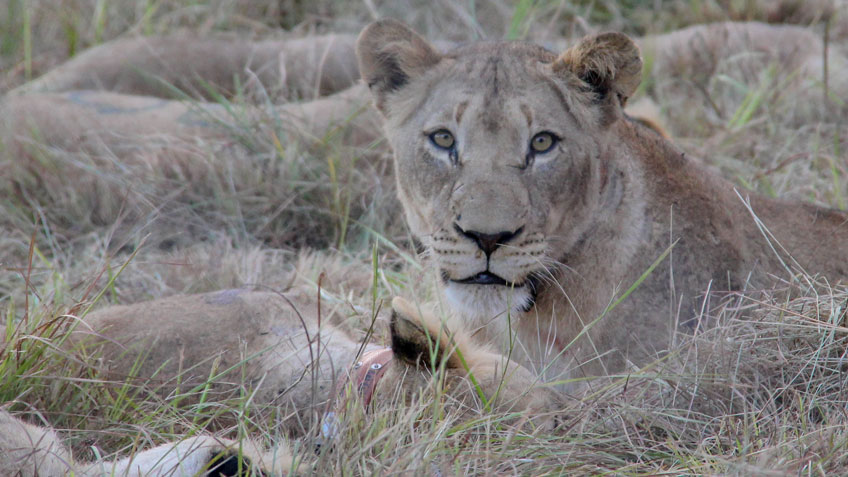 A lion awakes from sedation prior to its fellows.

New Hope
As disheartening as the loss of the male was for everyone following the 24 Lions story, positive news followed just days later. One of the female lions was in heat, and she was being accompanied by a male lion that wasn’t one of the relocated lions. No one knows where the lone Mozambican male came from; perhaps he was part of a scattered remnant population that had eluded detection or, just as likely, he is a transient that traveled from Gorongoza Park 80 miles to the north and found his way across roads and through villages to reach the delta.

That Mozambican male would father numerous cubs over the next year, and the delta lion population may have doubled.

The Delta’s Other Big Cat
Du Preez has studied interaction between apex predators in other parts of Africa including Zimbabwe’s Bubye Valley Conservancy and was particularly interested to see how the introduction of the delta lions would effect leopard populations. 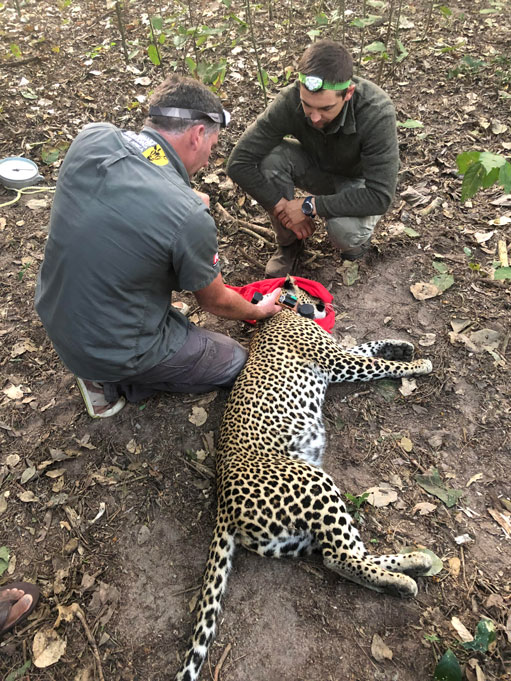 Nature doesn't operate in a vacuum, so it was important that biologists considered predation issues, especially in relation to leopards. This one was caught, sedated and fitted with a radio collar for future study.

Capturing wild leopards is extremely difficult. To help with the project, Haldane and his team contacted Coenraad Scheepers, one of Africa’s greatest houndsmen. Scheepers manages a pack of roughly 150 leopard dogs, mostly blueticks and foxhounds, and his dogs are among the most well-trained hunting dogs I’ve seen work. Because of the presence of tsetse flies, which carry sleeping sickness, domestic animals cannot survive in the delta (which is also why there are no cattle, goats or sheep there) so Scheepers has to run his dogs at night, trailing leopards by moonlight through the sand forests. It’s difficult and extremely dangerous work. In addition to the risk posed by big game, Mozambique is also home to over 20 species of venomous snakes. But despite the risks, Sheepers and his dogs have managed to locate and tree two cats that were collared for later study. The leopards that are treed are sedated and caught with a net as they fall. Studying their movements will help Du Preez better understand how these apex predators move and the impact that lions have on leopard numbers.

None of This Would Happen Without Hunters
The Zambeze Delta’s wildlife has returned from the edge of extermination thanks to hunter dollars and the tireless efforts of Mark Haldane. His relationship with the local people has provided the foundation for these projects. Haldane’s safari camp is the only employer in the delta, and additional hunter-generated funds through organizations like the Cabela Family Foundation have provided much-needed resources to the local communities. In addition to the meat drops, Haldane, Carter and others are working on projects within the community to help establish beehives for the local people, another source of income that also will help local pollinators.