After 22 years in the Air Force, most of those years at Elmendorf Air Base in Anchorage, Alaska, Heidi Anderson knew two things: One, she wasn’t leaving Alaska anytime soon. Two, Talkeetna was the perfect place to settle down. While she was still in the Air Force, serving as a flight engineer on C141B Starlifters and E-3A Sentries, she bought a piece of property just outside Talkeetna, a quaint little town in between Anchorage and Fairbanks.

Talkeetna is the gateway to Denali and the Alaskan interior and it’s exactly the kind of town you picture when you think of classic Alaska. Bears, moose and a variety of other critters frequently walk down main street there. Everyone knows everyone. The scenery is spectacular, of course. In the summer it’s busy with tourists, but then in the fall it’s so quiet the only sound you’re likely to hear is the distant sound of a Supercub flying someone to a distant sheep hunt, or moose hunt, or bear hunt. In the winter it’s eerily quiet. That’s the reason Heidi first came here 20 years ago—that and the fishing. 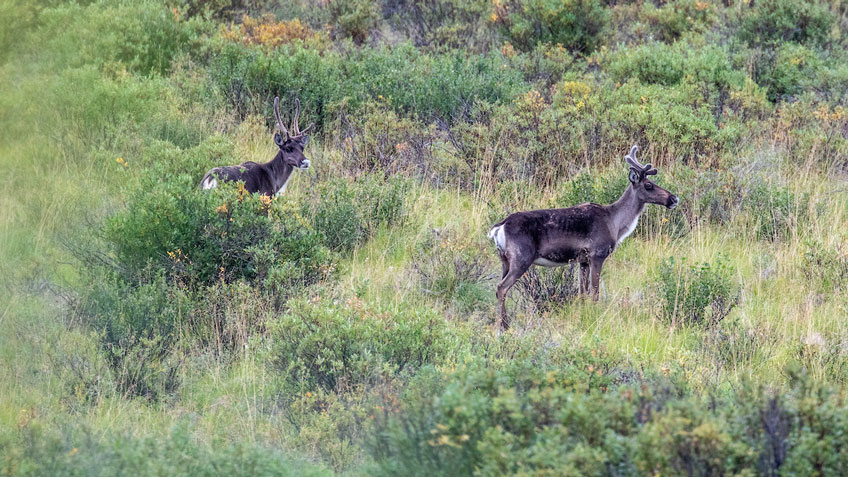 Although not the bull she had been stalking earlier in the day, Heidi Anderson harvested the cow caribou on the left to fill her freezer for the winter during the 2019 subsistence hunt in Alaska. (Image by Keith Crowley.)

Hunting came later. But since she has been an Alaska resident now for so many years, Heidi also regularly partakes in the Alaskans’-only subsistence hunts offered by the state. The Alaska Department of Fish and Game (ADFG) states it as plainly as it can when it says, “For most rural Alaska Residents, subsistence hunting is critical to their nutrition, food security and economic stability.”

These subsistence hunts are a truly important part of Alaskan heritage and they are a much-anticipated annual tradition for Heidi and her fellow Alaskans. Hunting to subsist means living the way Alaskans have for millennia. It means nothing goes to waste. It means people don’t go hungry. Alaska is still all about hunting.

I got to tag along on Heidi’s 2019 hunt, and I got to watch her down a beautiful cow caribou with the old Remington Model 700 her dad handed down to her. She loves that rifle. 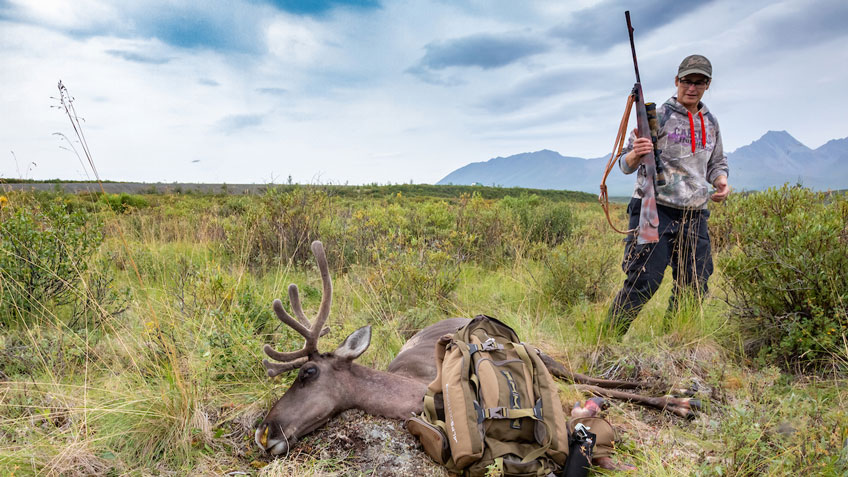 Heidi Anderson treasures the rifle handed down to her from her father. (Image by Keith Crowley.)

The Nelchina caribou herd had good calf recruitment this year, and there were a lot of animals coursing through the tundra northeast of Talkeetna. Because the numbers were so good, ADFG determined an either-sex hunt can and should be allowed for subsistence hunters. That doesn’t happen every year. Most years it’s bulls only.

According to ADFG, “The department’s July 2019 post-calving photocensus identified a minimum of 53,500 caribou for the Nelchina caribou herd… This leaves enough adults to allow permit holders to harvest either sex in 2019, and quotas for each hunt are not likely to be reached during the fall season, allowing all hunts to run the duration of their scheduled seasons.

Back to Heidi: She’d had an opportunity for a big bull earlier in the day, but the right shot never presented itself and eventually another hunting party pushed the bull far back into the hills. Heidi wasn’t going to risk taking such a long shot on the gorgeous bull, so she kept looking.

By her side, serving as friend, cheerleader, chief butcher and meat hauler is Bernie McGowan. McGowan lives in St. Louis, Mo., but spends several months each year in Alaska. He and Heidi have been hunting together for years. Heidi even travels back to Missouri to hunt hogs with Bernie now and then. Two minutes with him and you’ll recognize that Bernie loves hunting—especially hogs, but caribou or moose will do in a pinch. 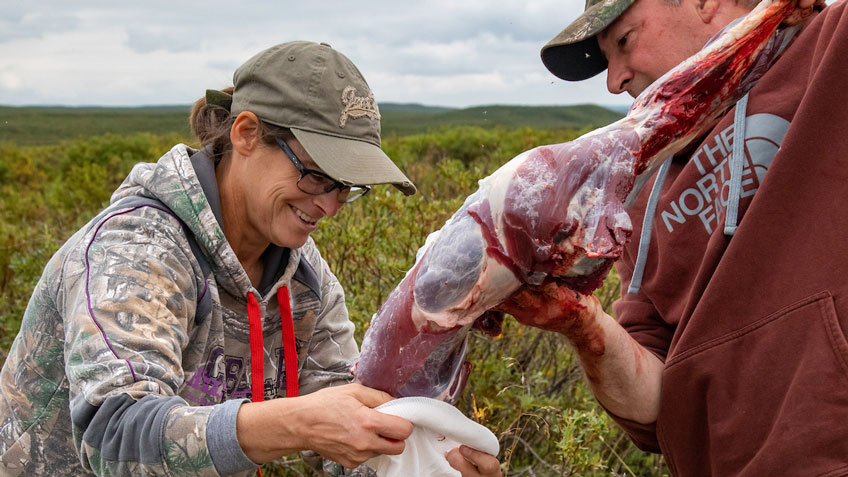 Heidi Anderson and Bernie McGowan place a caribou quarter in a game bag during Heidi's 2019 subsistence hunt in Alaska. The two friends have traveled to each other's states for years in order to hunt together. (Image by Keith Crowley.)

This day was all about caribou. When I caught up with them, Heidi and Bernie had just spotted five cows crossing a plateau. The cow Heidi took wasn’t the biggest in the group, and it sure wasn’t the big bull she’d tried for earlier in the morning, but that didn’t matter to Heidi. She was hunting for meat to get her through a long Alaskan winter.

As Bernie and Heidi began the arduous task of field dressing and quartering the animal, I asked her why she wasn’t hunting moose this year. A moose, after all, would provide substantially more protein than a cow caribou. But Heidi knows that hunting means conservation, and she knows her limits. “I live alone, so one caribou is about right to get me through the winter,” she explained. “A moose is too much.” That’s the kind of thing only a true conservationist and hunter would say—and you don’t get any more Alaskan than that.

About the Author: Keith R. Crowley is an award-winning writer and photographer and the author of three books on the outdoors: “Gordon MacQuarrie: The Story of an Old Duck Hunter,” (2003), “Wildlife in the Badlands,” (2015) and the newly released “Pheasant Dogs.” When he is not traveling in search of new stories and new images, you can find him at his home on a lake in northwest Wisconsin with his wife, Annette, and a collection of old dogs and old boats.