Nobody nods off in an Abner Druckenmiller predator-hunting seminar. If the FOXPRO sales director’s enthusiasm isn’t enough to keep you awake, you’re unlikely to nap during the animal calls. Druckenmiller will be giving his “Becoming the Ultimate Predator Hunter” seminar repeatedly throughout the NRA Great American Outdoor Show, running through Sunday, Feb. 10, at the Pennsylvania Farm Show Complex in Harrisburg, Pa. Druckenmiller hosted “FOXPRO Furtakers” on the Outdoor Channel for nine years. He embodies the epitome of a dedicated hunter, combined with a love of God and a sense of humor that only solidifies his bond with his audience and social media following, which tops 40,000 on Instagram @FoxPro_Inc and nearly 19,000 on YouTube.

Druckenmiller opens his seminar with a video of coyote and fox kills he has made over the years. Watching the nighttime hunts, sometimes conducted using thermal night vision, primes the audience for all Druckenmiller will impart in the next hour. It’s at that moment that he reiterates two of the NRA’s fundamental gun safety rules: positively identifying your target and being sure of what lies beyond. You don’t want to be knocking on a farmer’s door to tell him that you shot his dog. Look for collars.

FOXPRO, Inc., maker of high-performance game calls, started in 1995 after a father watched his sons walking into the woods with a boom box and a flashlight to hunt fox. He set about making a single unit that would provide the boys with the sounds they needed in a more compact device. Nearly 25 years later, FOXPROs can store up to 1000 calls and they’re sold the world over, but they’re still made not an hour away in Lewistown, Pa.

When Druckenmiller was a boy, he told his mother he was going to live in the mountains and make his living off of hunting. He never wavered. He married his high school sweetheart, Kirsten, and they reside in the mountains of central Pennsylvania with their two children, 6-year-old Brooks and 3-year-old Sawyer. Son Brooks takes after his father, playing baseball, and hunting and fishing. Daughter Sawyer takes after her mom, riding her pony in the great outdoors. Faith is the cornerstone of their lives, and Druckenmiller is not timid about giving credit to God for his successes and being grateful for his many blessings.

One of Druckenmiller’s top reasons for focusing on predators is that it’s ideal for introducing children to hunting. It’s fast pace does not require a lot of patience. You only spend 20 minutes at any one stand and then it’s back to the truck to drive to the next stand.

But there are many other reasons for focusing on coyote, fox and other predators. They put pressure on the balance of native fauna, killing fawn, grouse, turkey and other game species. They often carry diseases that are transferable to pets, including parvo, distemper, rabies and mange. As this website has often reported, coyotes especially are a menace to cats and smaller dogs, to the point where towns are being called out for allowing their predator population to go unchecked or are being forced to cull the pet-eaters.

In addition, species like raccoon can not only get into trash, but set up residence in your home, requiring professional removal. The pelts of furbearing animals can be a small source or revenue, and Druckenmiller suggests scraping and curing skins and then freezing them so that you can time the market somewhat. And, of course, predator hunting is often a year-round activity that fills the gap most especially between deer and turkey seasons. 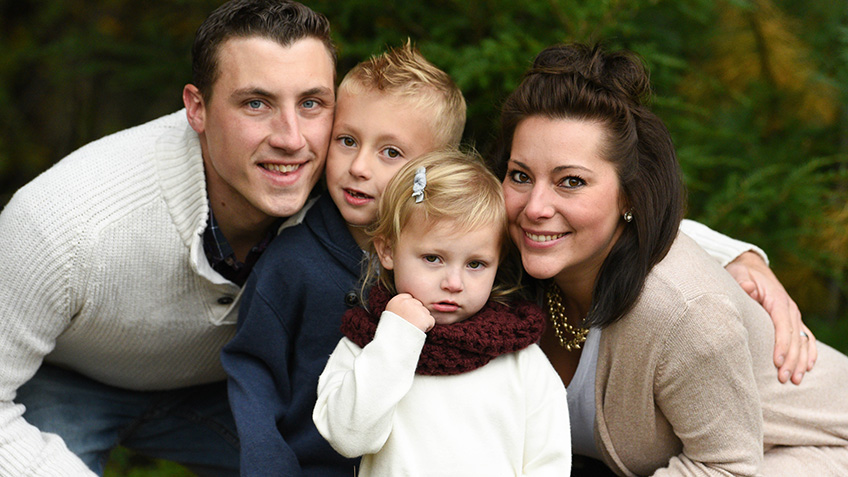 Abner Druckenmiller credits God for all his blessings, including his family and his ability to live in the mountains and make his living off of hunting as he's always dreamed.

Equipment is covered from best firearm options to whether to use white or red light (red is preferred). Druckenmiller gets the audience laughing discussing his scouting techniques. Yes, he studies terrain for places that provide elevation for him and natural predator travel routes, but he also suggests keeping your ears open. He uses the example of being at his son’s baseball game and overhearing neighbors talking about hearing coyotes. Instantly, he’s shouldering his way into the conversation and asking people where they live.

The discussion on terrain is highly detailed and informative. You’re looking for natural paths along woodlines, fence rows, hollows, clear cuts, power lines and the like. But you want a place that will allow you elevation so that brush doesn’t obscure your target. Ideally, you want the wind in your face. Druckenmiller is respectful of all God’s creatures and he is grateful for everything they provide him and his family, but he emphasizes that God wants us to enjoy the world he created for us. He notes that although predators can be conditioned, they lack reasoning capabilities. They don’t hear his car door and think, Oh, that could be Druckenmiller. I better high-tail it. So, although wind direction is important, concealment is not—because predators are not going to pick up on that. Camouflage can help, but Druckenmiller hunts out in the open.

Hands down though, the most entertaining part of Druckenmiller’s program was demonstrating how to use calls. He’s a master of using mouth calls, amplifying them with his hand, and even combining them with the electronic FOXPRO calls. When you’re fishing, you try various lures or flies to figure out what the fish are hitting on, and the principle is the same with game calls. You keep trying different things until you find the sound or combination of sounds that draws the predators to you. Druckenmiller never turns off the call. He may lower the volume and switch to something else, but he never turns it off, except under certain situations. Does it matter that there aren’t jackrabbits in Pennsylvania? Of course not, because again, predators ability to reason is limited. He did reveal that approximately 75 percent of the predators he calls in are by using a distressed cottontail sound.

Scan vigorously with your light and you should see something within 12 minutes. Any longer than that and you can pack up and motor to the next stand. Druckenmiller reminds hunters to look behind them when they’re using calls to draw in predators. You can call them from the least suspected direction. He concludes with encouraging hunters to enjoy God’s creation, and when the seminar ended, more people were making their way toward Druckenmiller than were heading toward the door.