What if there were a program for young Americans that created all-American NRA Life members just in time for their voices to be heard at the polls for the first time in 2020? What if this same program created a brotherhood, sisterhood or kinship so that when these individuals met, they immediately bonded over growing up as part of an organization for youth specifically rooted in the Second Amendment? And what if these young Americans went off to college, and formed pro-Second Amendment NRA-based organizations on campuses? Finally, what if these people went on to become adults with families of their own and started chapters of this same program to give the next generation of 14- to 21-year-olds the same solid foundation grounded in a belief in the Second Amendment and the NRA? This is what I refer to as “generational recruitment.”

Organizations like this have existed in communities nationwide for generations such as the Boy Scouts of America, Girl Scouts of America and Royal Rangers. They not only produced good moral kids who grew into solid citizens but they helped their communities create strong patriotic bonds. Consider one program in particular that I worked to create: the 2nd Amendment Teen Hunters Youth Hunting Model. Look for more information about this program to be posted at North American Outdoors.

How Texas’ 2nd Amendment Teen Hunters Model Can Work in Your Community
The 2nd Amendment Teen Hunters Model is based on recruiting young members of a supporting organization (in this case the NRA) between the ages of 14 and 21. This model is far different from many of the existing “one and done” programs currently offered through hunting and shooting sports youth organizations. Unfortunately, many of these programs focus on first-time hunters, so after a youth participates in a hunt, he or she is no longer eligible to take part in future opportunities.

The 2nd Amendment Teen Hunters Model, however, is a multi-year program that provides young people with recurring opportunities to experience hunting for different species using all different hunting methods and to take part in all different shooting disciplines. It ultimately gives young people the opportunity to earn different NRA Instructor credentials and certifications, as well as earning money through fundraisers to cover membership in their sponsoring organization and maybe even an NRA Life membership. 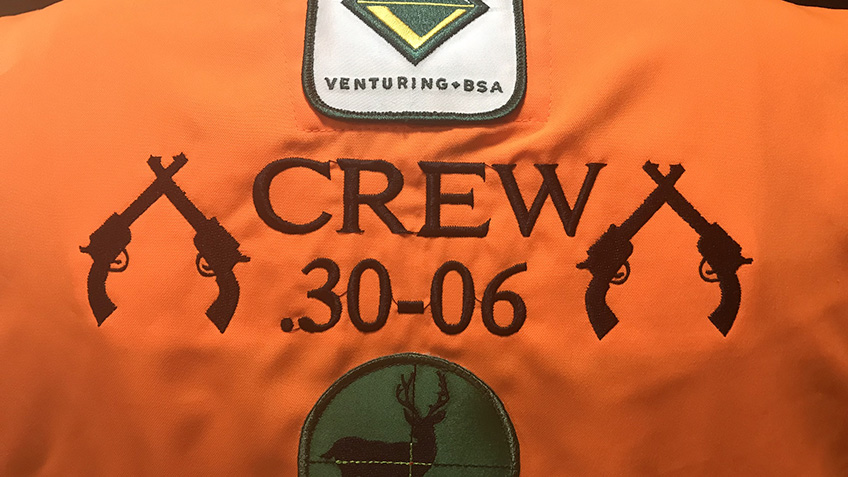 The 2nd Amendment Teen Hunting Model can be applied to any hunting program in any youth organization to nurture committed youth hunters without wasting resource. The BSA Hunting Venture Crew .30-06 borrowed some logo elements from its enthusiastic sponsoring partner, The Arms Room in Dickinson, Texas.

How We Put the Model to the Test
I was approached by several older Boy Scouts who said they wanted to try hunting. Upon researching the topic, I found that, according to Boy Scouts of America’s national policy, its Venture Scouts (formerly Explorer Scouts) program permitted participants to go hunting. I also found out that the Venture Scouts crews had always been co-ed, making for the perfect environment to test this model.

I met with Travis James, owner of The Arms Room in Dickinson, Texas, and his general manager, Anthony Macaluso. I asked if they would be interested in chartering a BSA Venturing Crew and what would be involved. They were immediately on board with helping to get more youth involved in hunting and the shooting sports. We set the parameters and BSA Venture Hunting Crew .30-06 was formed.

The Arms Room has been more supportive and involved than any charter organization I have ever observed with a Boy Scout Unit. But this is not surprising. Most adults involved in hunting and the shooting sports actively look for ways to teach young people the sport they cherish. Anyone looking to duplicate this model should begin by pinpointing an excited supporting organization to partner with as we did.

The Arms Room Gun Room and Indoor Range in Dickinson, Texas, has been 100 percent behind the effort to introduce teens to hunting and the shooting sports in a manner consisted with what the research shows works.

What Current Youth Hunting and Shooting Program Models Reveal
The current model for almost all youth hunting and shooting programs is based on research conducted by the public opinion and survey research firm Responsive Management. The research indicates the following:

Most organizations base their youth programs on this research, often viewing these programs as membership recruitment tools for their organizations. As a result, there are a lot of dollars spent to capture and recruit youth participants. Youth hunting programs that follow this model race to capture as many first-time hunters as possible providing they meet the minimum age set by the given organization, which is usually 9 years old (per the research).

Why Fix What Isn’t Broke? Because It ISN’T Working!
Current programs in state and federal agencies show it is recommended to seek a first-time hunter between 9-11 years of age. There are several problems with this model. First, as mentioned above, this model looks for first-time participants between 9 and 11 years of age. These kids have not been vetted or identified as even being interested in the outdoors, hunting and shooting sports, and who may have no interest in ever hunting again, taking spots that could be given to a youth who has made a commitment to hunting or the shooting sports.

Sadly, in some youth hunting programs it is not uncommon for young people who have no interest in hunting to show a lack of respect for the hunt, the wild game, the landowner or the experience. Second, some children between the ages of 9 and 11 are not capable of appreciating or fully understanding the concepts of hunting, especially if that youth is only given a one-time hunt through a one-and-done hunting program. Teenagers between ages 14 and 15 are more capable of comprehending and grasping more out of the experience. It goes to reason that this older youth would be more mature and more knowledgeable and more helpful and skillful when it comes to taking care of game after the hunt and providing assistance to the landowner. Now, before those reading this disagree, stating, “But my kids certainly understood all of this at a much earlier age,” I am not writing about kids raised in a hunting family. I am writing about those participating in a youth hunting program as first-time hunters. 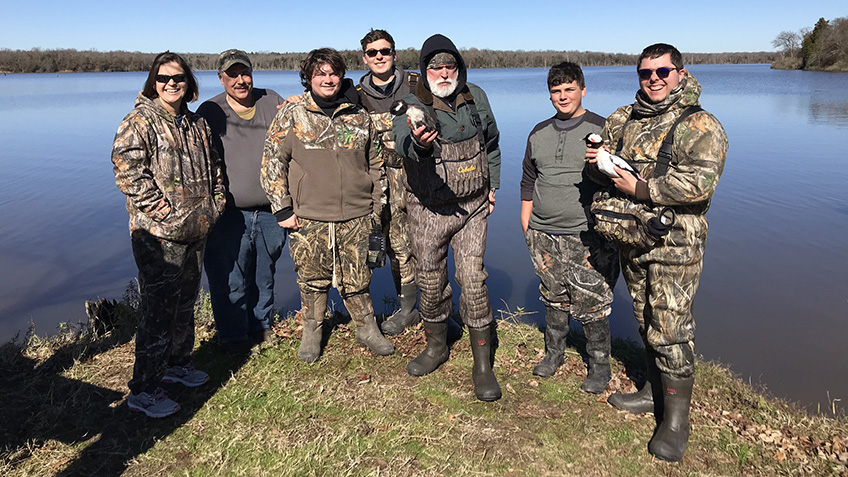 The 2nd Amendment Teen Hunting Model is a multi-year effort that exposes young hunters to more than just a single hunt. The participants are afforded a variety hunting opportunities including various species and methods.

How Supporting Organizations Can Use the 2nd Amendment Teen Hunters Model to Save Resources
By acknowledging the available research, organizations such as the NRA, shooting clubs and youth hunting organizations will be able to save valuable resources, time and money in recruiting new members into their organizations. In general, considerable time is spent locating youth between the ages of 9 and 11 or 10 and 12 that are falling out of the existing hunting population. Once these young people are isolated, a lot of resources are spent in the form of money, workforce (both paid staff and volunteer labor) and equipment to identify the demographic within the subgroup of the overall population that has an interest in the outdoors. In other words, many kids who are recruited into outdoor programs between the ages of 9 and 12 may drop out of those organizations because of lack of interest or other factors. This is no different than young boys and girls starting sports such as baseball and soccer and then dropping out after a few years.

Many youth hunting and shooting programs reflect the state and federal agency research that suggests the optimal age to introduce kids to outdoor activities is between 10 and 12 years old. Many youth hunting organizations require a minimum age of 9 and focus on first-time hunters, trying to capture the youth before they are distracted by technology or other interests. We have to make every effort to reach America’s youth, but keep in mind that using the 2nd Amendment Teen Hunters Model can save time and money by not duplicating efforts. Other organizations that are taking the time to introduce young people to the outdoors are also helping to “weed out” youth who are have no such interests.

By using the 2nd Amendment Teen Hunters Model, an organization can recruit members who already know they have an interest in outdoor activities and firearms, and who are old enough to make the decision for themselves regarding their interests and hobbies. 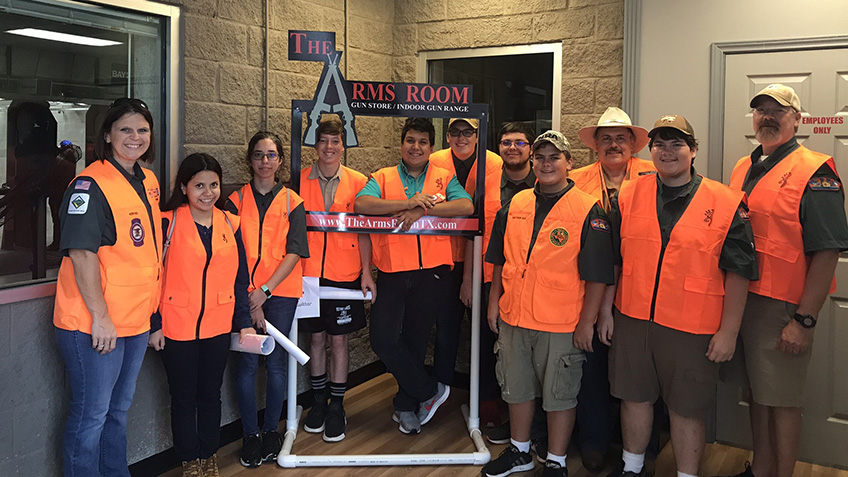 The brilliance of the 2nd Amendment Teen Hunters Model is that kids are vetted for their level of interest in hunting or the shooting sports. This way efforts are not expended on youths who express no interest in continuing with hunting but on those who have shown a level of commitment to the sport. 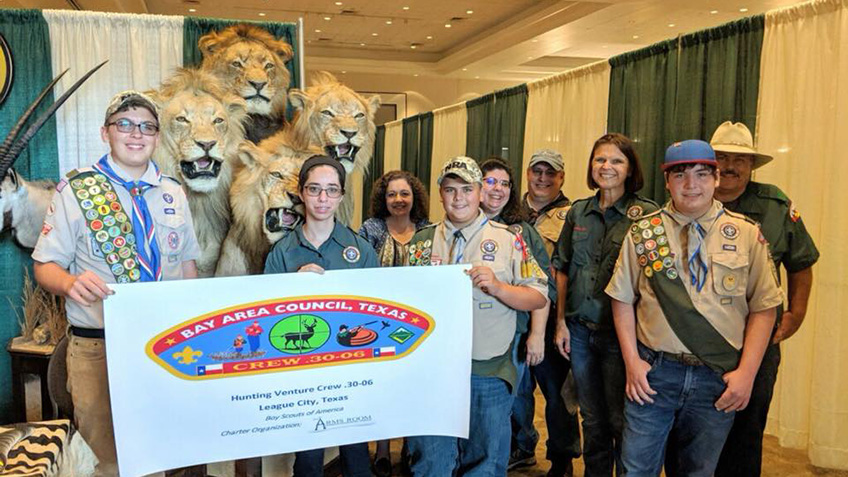 Starting with a youth organization that already incorporates hunting into its programming, such as Boy Scouts of America Venturing Crews, gives outlet to the successful results of the 2nd Amendment Teen Hunters Model. Here the BSA Venture Hunting Crew .30-06 visits the Safari Club International show in Houston.

The shooting sports are a big and popular part of the BSA. Just using the numbers from the only example I have, there is a potential of 75 percent of BSA members, or 3 million, potential new members for the NRA. And this is a statistic from only one youth organization.

More important are the numbers of hunters in the United States. While not all NRA members hunt, all hunters have guns. So why are there not at least 11.5 million NRA members?

By using the right tools and focusing the right resources, increasing membership and getting our voices heard should not be difficult. If we are having a difficult time protecting our Constitutional rights and convincing others why it is important to protect those rights, then we must look at the techniques we are using and reevaluate them. Times change and, sometimes, we must change our techniques.