Photo credit: The author and Chief of the General Staff of the Kenyan Armed Forces, General Jerimiah Kianga, and other senior leaders of the Kenyan military discuss upgrading their Heckler & Koch G3 rifles to the M4A1 with Special Operations-modified accessories.
More
SUBSCRIBE

This NRA Hunters’ Leadership Forum website held its first anti-poaching seminar during the NRA Annual Meeting and Exhibits in Indianapolis on Sat., Apr. 27. While most have heard about the commercial slaughter of rhino and elephant, many conservationists present were surprised to learn about the extent to which wildlife trafficking is a global security issue that includes everything from smuggling live animals into the United States, to running .375 H&H rifles from Europe to Africa, to deliberately taking a whitetail deer out of season. While breaking the law to feed your family is understandable, in Africa, illegally killing game for food (bushmeat poaching) is a greater threat to lions and leopards than targeted poaching because the scale on which it occurs reduces the number of predators that can survive in a given area. Plus, the bushmeat poachers often serve as guides to the hardcore, commercial operators who target endangered species like rhino; those groups are frequently connected to the same transnational criminal organizations that traffic children, guns and drugs.

As a result of the elevated threat posed by poaching and wildlife trafficking, Congress has passed a law declaring that it is the policy of the United States to support anti-poaching, anti-trafficking and community conservation, which has enabled the U.S. Fish and Wildlife Service (USFWS), along with a range of federal law enforcement agencies, to collaborate with governments around the world to reduce wildlife trafficking. We even have a National Strategy to Combat Wildlife Trafficking, which, from a policy perspective, puts the issue on par with human trafficking and terrorism. However, rhino and elephant deaths continue to be unsustainable. 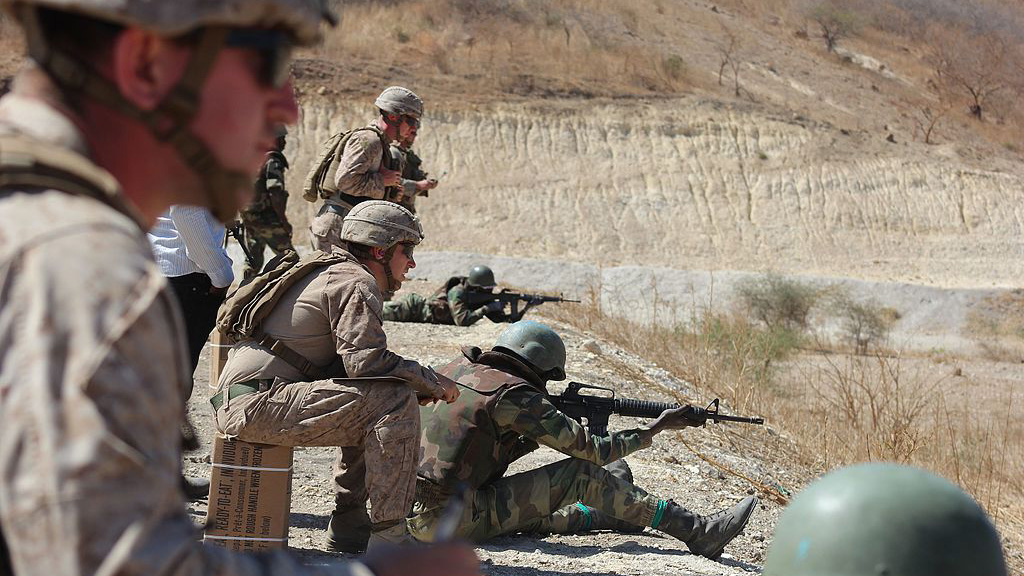 In an effort to combat illicit trafficking, in 2016 U.S. Marines were in Senegal at the request of the host nation government in coordination with the U.S. Embassy in Dakar. Senegalese soldiers completed a month-long training exercise with the Marines. (U.S. Marine Corps Photo by Staff Sgt. Jonathan P. St. Ann)

With 18,000 hunters traveling to Africa every year, the number of hunters is twice that of USFWS employees and exceeds the number of FBI special agents by 30 percent. We hunters spend an average of 12 days in the field and are often in areas that are difficult to access and/or not visited by eco-tourists. Plus, our being in the field alongside game scouts and trackers means that we are usually much closer to meaningful intelligence than those being driven around parks during an eco-safari. Subsequently, as hunters, as well as members of the outdoor industry, we have an enormous amount to offer active international efforts to combat wildlife trafficking and, if done correctly, can prove to be the critical component to reversing the tide. However, we have two major issues to tackle: legal approval and a comprehensive approach.

While there are many non-profits and NGOs that explicitly exist to support anti-poaching operations or have developed programs to do so, funding, equipping, training and advising foreign security forces, which includes private guards, game scouts and foreign law enforcement, is subject to a range of federal laws. Allowing a foreign national to look through the night vision goggles you bought at a local store can potentially be a criminal act. For example, the U.S. government’s International Traffic in Arms Regulations (ITAR) control the export and import of defense-related items and services on the U.S. Munitions List. Funding a group in an ITAR-prohibited country like Zimbabwe, where security services have a long history of human rights violations, can turn into a fiasco if that group uses force in an illegal manner or does business, such as buying ammunition, with an entity that is connected to bad actors.

Even though the U.S. Department of Justice has yet to prosecute anyone for supporting anti-poaching operations without government approval, that may soon change. On May 6, Congress initiated an investigation to determine if any recipients of U.S. funding for anti-poaching operations have enabled a human rights violation. According to the media outlet Buzzfeed, the World Wildlife Fund has been supporting an anti-poaching unit in Nepal that has tortured and illegally killed people. In Kenya, six officers from the Kenya Wildlife Service (KWS) have been recently arraigned for murdering a trespasser and feeding his body to crocodiles; they are currently awaiting trial. On May 5, KWS reportedly burned a 12-year-old girl alive. The track record of armed groups, with poor training and limited oversight, in executing a mission about which they are passionate, is less than stellar. 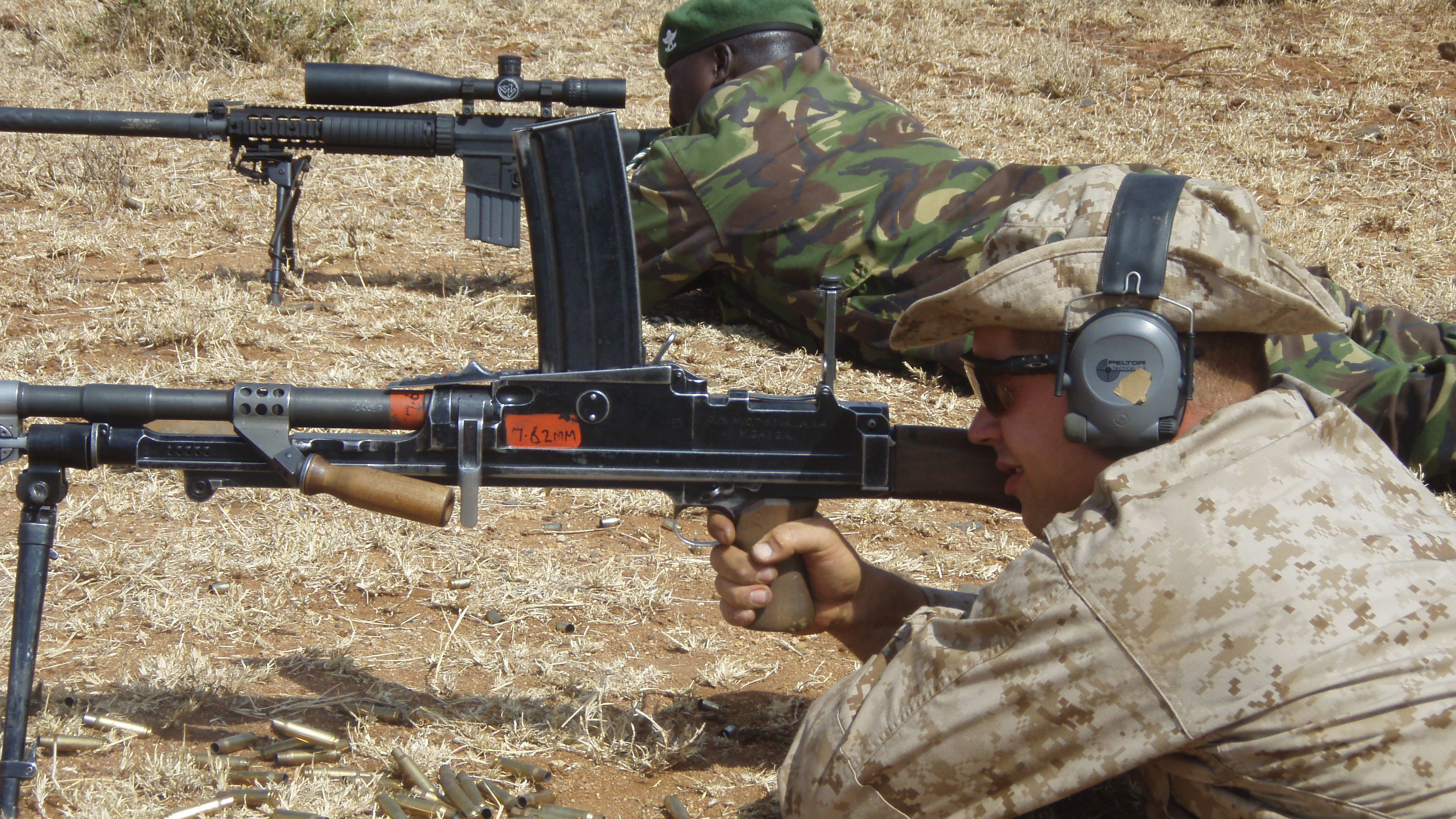 The author shoots a WWII Vintage Bren Light Machine Gun that had been re-chambered in 7.62 x 51mm NATO, which was still in use by the Kenyan military. Reliability left much to be desired. The Kenyan sniper in the background is shooting a U.S.-provided MK-11 semi-automatic sniper rifle.

Once all of the appropriate permits are in place and we have an effective oversight system, we have to decide on an approach. Some advocate for indirect, community engagement like organizing soccer leagues in towns from which large numbers of poachers originate. Many online commandos think we should just “kill ‘em all.” Over the last 19 years, U.S. Special Operations Forces (USSOF) have been deployed to more countries, for a longer period, in a wider range of missions and captured more lessons learned than any military in history. During last year alone, USSOF deployed to 149 countries, approximately 75 percent of the nations in the world. While Direct Action operations, like the raid against Osama bin Laden, get all of the attention, the majority of the work done by most Special Operations Forces falls into a mission set called Foreign Internal Defense (FID). Per our doctrine, the objective of FID is to enable a “host nation (HN) government to free and protect its society from subversion, lawlessness, insurgency, violent extremism, terrorism and other threats to its security.”  Because poaching and wildlife trafficking fuel local, regional and global security threats, efforts to enhance a partner-nation’s ability to combat poaching and wildlife trafficking are clearly within the realm of FID.

For USSOF, foreign internal defense largely entails living with, training alongside and advising the forces in a partner country. This ensures they are better able to address their security issues, with their resources, in effective ways that comply with international law. It also includes passing out a lot of soccer balls and collaborating with groups whose members have a severe allergy to the smokeless propellant cordite as they often have expertise in the types of work that create offensive, strategic results. These activities, which largely revolve around community development—especially education, jobs and health services—change the paradigm or conditions that incentivize insurgents, smugglers and poachers to take up arms. Community conservation, the activities that tie the economic benefits of wild game and wild habitat to a local population, are an essential complement to security enhancements and should be planned before we start issuing night-vision goggles and teaching fire-and-maneuver. 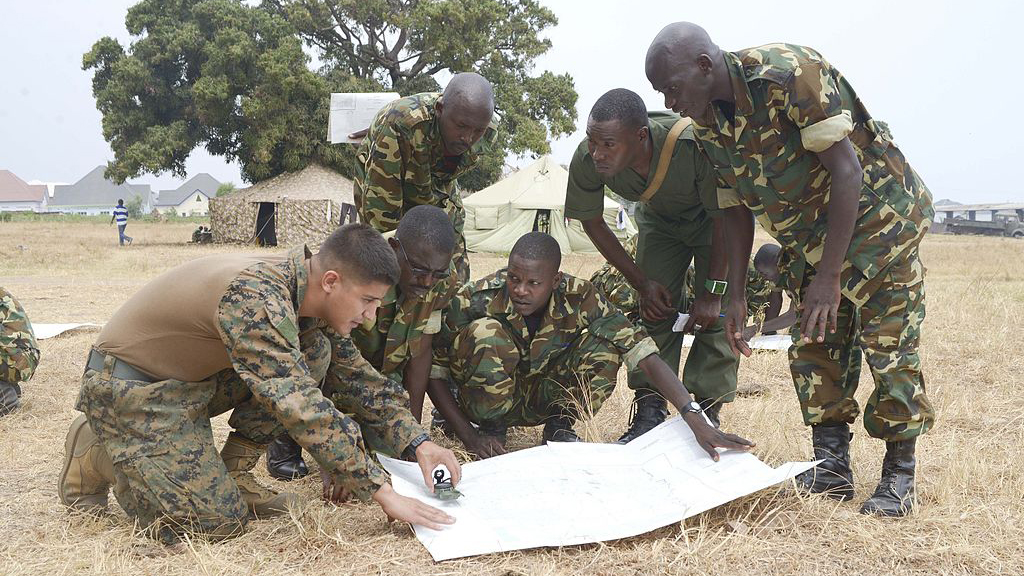 Ever since our brave operators flew across the Hindu Kush mountains of Afghanistan in October 2001 to assist warlords and extirpate terrorists, virtually every Commander of U.S. Special Operations Command: Admiral Eric T. Olson, Admiral William H. McRaven, General Joseph Votel and General Raymond A. “Tony” Thomas, to name a few, have said that killing alone will not lead us to victory. Against irregular forces like insurgents and traffickers who come out of local communities, force is purely defensive and tactical; each bullet is equivalent to a finger in a dike that just buys space and time for community-action programs to gain traction. From a theoretical perspective, waging war, or applying lethal force against a population, is an inherently political act and is therefore only effective if it creates a better political reality for those against whom force is used. Walk softly, carry a big stick and bring several carts full of carrots.

Never in our history have we had so many members, with so much experience, who are so passionate about and willing to support anti-poaching and community conservation programs abroad.  Plus, we have never had such an incredible opportunity to directly support U.S. Foreign Policy and National Strategy in pursuit of our shared passion. David Bernhardt, the new Secretary of the U.S. Department of The Interior, was the keynote speaker at the annual NRA HLF Dinner. He also is a co-chair of the Presidential Task Force on Wildlife Trafficking, which gives him both statutory authority and responsibility to coordinate with governmental departments and private entities to create effective solutions. In collaboration with the International Wildlife Conservation Council (IWCC), which was created to advise the Secretary, hopefully we will be able to put shared objectives ahead of historical opposition and create a coordinated plan that is more effective than previous approaches. Perhaps the best part of being in U.S. Special Operations is having the opportunity to do that which has never been done before.