Mentored Hunter Now Gives Thanks by Paying It Forward

In 1965, mountain lions were designated big-game species in Colorado and provided the same protections given to other Colorado wildlife. This designation was a great improvement from the unwelcome varmint they were once considered to be, with bounties up to $50 offered for each one taken. Today in Colorado, based on intensive scientific studies, mountain lions are estimated to number around 4,500 to 5,500. However, according to Colorado Parks and Wildlife (CPW), due to the reclusive nature of mountain lions, population estimates cannot be 100 percent certain.

In Colorado, adult male lions may be more than 8 feet in length and weigh an average of 150 pounds. As in other western states, natural habitat for Colorado lions includes pinyon pine, juniper, mountain mahogany, ponderosa pine and oak brush. Lions generally are most abundant in areas with plentiful deer populations. According to the CPW, lions’ natural life span is about 12 years in the wild and up to 25 years in captivity. To hunt them, Colorado hunters must have passed a hunter safety class as well as taken and passed a mountain lion education course and test, including those with apprentice hunting licenses. Here is the tale of one Colorado youth’s mountain lion hunt.

How Being Mentored Changed A Youth’s Life
Colorado’s Kendall Anthony was introduced to fishing at age 3 through his dad and a Spiderman fishing pole. Falling in love with the outdoors, Kendall enjoyed camping and fishing and fondly recalls his younger years of sneaking off with his mom’s bread and bacon to venture to the nearest water hole and reel in a fresh catch.

Later influenced by programs on outdoor television, Kendall also developed an interest in shooting sports. In 2011, he passed his local hunter safety course and eagerly looked forward to new opportunities in addition to camping and fishing. Flourishing as an avid outdoorsman, Kendall found great peace in the outdoors and identifies it as being his great escape. Having developed his passions in skiing, hiking, camping, fishing and shooting sports, it was only natural for him to gravitate toward his local Boy Scouts chapter. Later, Kendall joined a local big-game hunting club where he met his adult hunting mentor and friend, Patrick.

Just as his teenage years were becoming a challenge, Patrick proved to be a timely and needed mentor for Kendall. (An impressive reminder to all of us is the powerful and positive impact our time as mentors can have on the lives of the next generation.) After taking Kendall on a few hunting trips, Patrick determined Kendall was ready for a much-anticipated mountain lion hunt.

Kendall eagerly prepared for the hunt and was up by 1:30 a.m. and on the road with Patrick by 2 a.m. The duo was at the site where they had seen a few tracks by 3:30 a.m. Now it was a waiting game until 6:00 a.m. when they would let out the dogs. They first released Ruby, a younger dog, and then Bell and Geronimo. 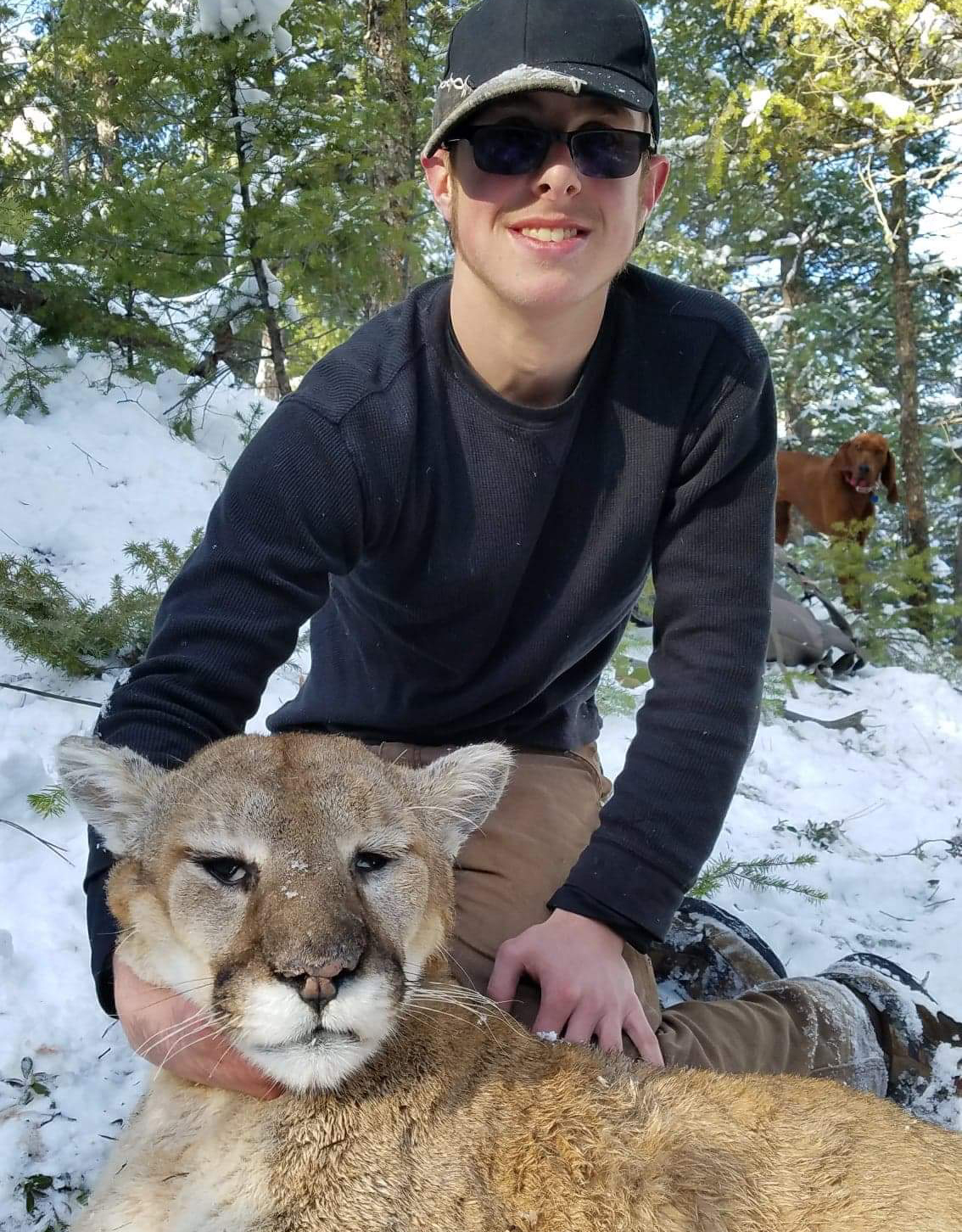 Kendall Anthony found a hunting mentor during his teen years. He now looks forward to doing the same for some other young man who may need the hunt of a lifetime and some life lessons.

Thirty minutes into the tracking, the dogs treed the lion in the dark timbers. Patrick and Kendall could not tell if it was male or female so they called off the dogs and left, planning to resume the hunt the next morning, this time driving back to the tree from a different spot in the road. Releasing the dogs where they had treed the lion the day before, the dogs immediately picked up the scent. When Patrick and Kendall caught up to the dogs, they easily determined the lion was a mature tom and that Kendall would harvest him. Flushed with adrenaline, Kendall drew his pistol and fired. The tom jumped out of the tree and ran only a short distance. Giving thanks for the lion, Kendall and Patrick tagged it and enjoyed the moment with a few man hugs and photos. It was later determined that Kendall’s tom was one of the biggest seen by area game wardens and earned Kendall an award for the biggest mountain lion by anyone in his hunting club.

It is with great excitement that Kendall anticipates his future aspirations of joining the National Guard and later becoming a cattle rancher and big-game hunting guide. Kendall is also eager to own and train his own hunting hound and looks forward to paying it forward and mentoring others in the outdoors just as his good friend and mentor Patrick did for him. Kendall is ever thankful for the life lessons imparted by Patrick, who along the way taught him to stand up for himself and become the man he is today.

Headed for Mountain Lion Country? Heed These Tips from the CPW.
Mountain lions are generally quiet and elusive, living in remote country with ample deer and adequate cover. As this website has advised in the past, we humans can live with these incredibly efficient predators providing we keep a few precautions in mind, particularly as we head outdoors this summer. Read these tips from the Colorado Department of Wildlife on what to do if you encounter a mountain lion and for general guidelines if you live in mountain lion country.

About the Author:
Lori Pace resides in Colorado with her family. She is a high school teacher and is married to Anthony N. Pace, founder of Freedom Hunters. Lori enjoys a multitude of outdoor opportunities with her favorites being pheasant and antelope hunting. When not teaching, being a mom or hunting, Lori enjoys reading, writing and print design for various professional platforms.