On July 1, Kentucky will become the eighth state to take the National Rifle Association (NRA) up on its offer of a comprehensive online hunter education course—100 percent without charge to individual or state. Some states contract with for-profit education programs that charge for the training necessary to obtain a hunter safety certification. Regardless of whether you are the only hunter in your family or you’re trying to bring five children into the sport, the NRA is committed to ensuring that neither money nor distance be an impediment to you getting your hunting license. The organization is committed to helping grow the nationwide ranks of safe and successful hunters.

Effort and commitment, however, should be a part of the licensing process and the NRA makes even that easy with this refreshed course. There are 15 chapters in total, the majority being video- and visuals-driven, with updates to the NRA’s 70-year-strong hunter education program. Some elements of hunting never change, but the free NRA Hunter Education Online Course is modern and engaging.

Students create an account online at NRAHE.org and then click to view their particular state’s requirements. Often state hunter education programs make field days, or range days, mandatory. This is, in theory, to ensure you know your way around your firearm. In those cases, you simply bring along your certificate showing you’ve completed and passed the online portion of the program. Then the state will issue your hunter safety card, a prerequisite to obtaining a hunting license. 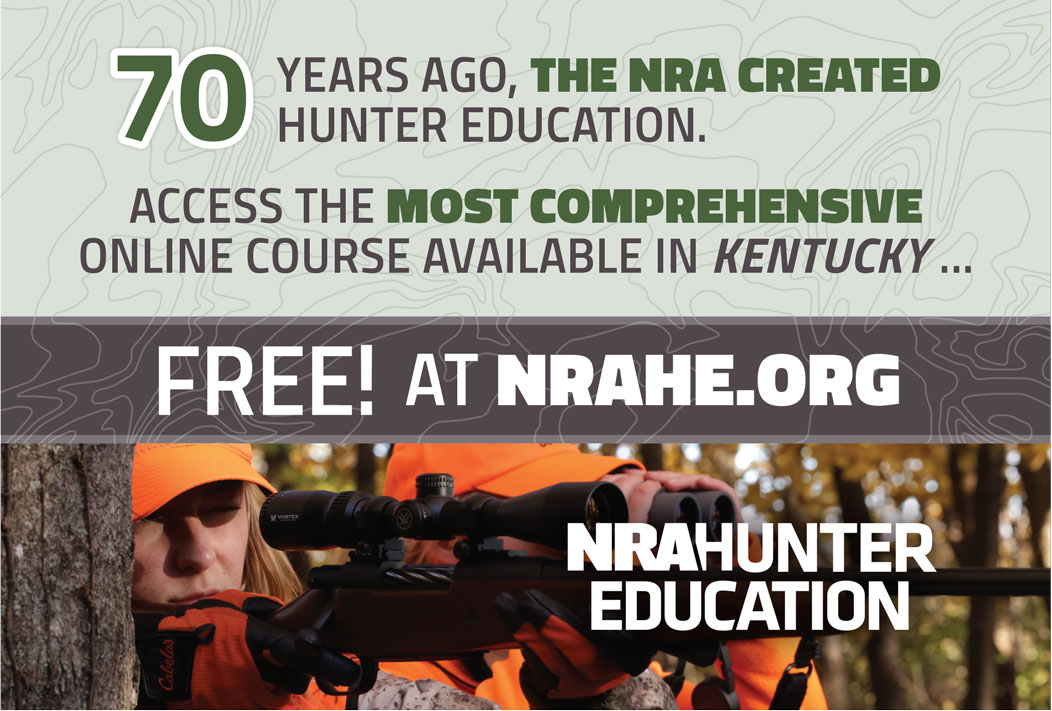 Today Kentucky joins seven other states that offer the free NRA Hunter Education Online Course as one way of obtaining hunter safety certification prior to obtaining a hunting license.

Some states, such as Kentucky, recognize that one day at the range does not mean you are a proficient shot or a consistently safe firearm handler. More one-on-one training is needed with a hunting mentor at the range before the student heads to the fields or woods. The safest thing the state can do is to start the novice hunter down that journey as quickly as possible. In that case, the NRA will issue you your hunter safety card, which you can then use to obtain your license.

The complimentary NRA Hunter Education Online Course takes approximately seven and a half hours to complete, but the great thing about it is that you don’t have to spend, say, six evenings in a classroom that can be a long drive from where you live. You simply login and spend as much time as you have available, making your way through the course at your own pace. Review quizzes are given at the end of each module and the student needs to earn an 80-percent grade or better on the final assessment to secure their printable certificate.

If you want to know what the NRA does for hunters, look no further than the $2-plus million it spent just to implement the software for this national program, integrating it with each state’s onboarding requirements, and the $100,000 the organization continues to invest annually to ensure the maintenance of the system going forward. Former NRA Hunter Services (HS) National Manager Peter Churchbourne, who is now a director for the NRA Hunters’ Leadership Forum, led the charge along with present NRAHS National Manager Matt Fleming to bring this monumental effort to fruition.

Fleming speaks highly of the efforts of the Kentucky Department of Fish and Wildlife Resources Acting Assistant Director of Information and Education Brent McCarty. He is young, enthusiastic and, interestingly enough, like many in his age cohort, comes from a non-hunting background, but harbored a curiosity for the sport. His parents did instill in him a love of fishing, hiking and animals. “I love the outdoors,” McCarty said. When he was in his junior year of high school he was flipping through a journal of college study concentrations when he spied the wildlife management program at Eastern Kentucky University.

He quickly learned about the essential role hunters and trappers play in controlling animal population so that they remain healthy, especially in a state like Kentucky where there are no longer any apex predators, such as wolves and mountain lions. Of the 120 counties in the state, more than half are overpopulated with whitetail deer. When a species’ numbers exceed its habitat’s ability to support it, competition for food leads to stunted growth and disease. Hunters are critical in the management equation, which is why McCarty is so committed to America’s national R3 efforts in hunter recruitment, retention and reactivation.

“We can’t thank the NRA enough for what it has provided through this program."—Brent McCarty, Acting Assistant Director of Information and Education at the Kentucky Department of Fish and Wildlife Resources

“We can’t thank the NRA enough for what it has provided through this program,” McCarty said. It’s not that Kentucky—or any state—couldn’t develop such a program on their own. It’s that such efforts cost time and money, both of which are in short supply when agencies are cash-strapped and focusing on attracting and keeping people involved in the sport. McCarty explained that because the NRA Hunter Education Online Course is without charge to state agencies, it frees up Kentucky’s cadre of knowledgeable and dependable volunteer instructors to be trained in expanding what the agency offers its hunters, from workshops and clinics to collaborative efforts with community partners. “You need someone who’s willing to fork over the big bucks sometimes,” McCarty said, reiterating his gratitude for the NRA’s roots in hunter education and safety.

Of course, like anything new, the agency did receive pushback. McCarty is featured in a Facebook Live video that communicates with all stakeholders, laying out the reasoning for switching to the free NRA online course. The Kentucky Fish and Wildlife Commission, which includes governor-appointed representatives from the nine state districts, agreed with the reasoning and signed off on the project. An online survey of the public, admittedly a public that is pro-hunting, overwhelming supported the effort at close to 80 percent. Instructors were of mixed opinions, but McCarty is committed to initiating new programs and he sincerely hopes the instructors will continue to be available for those much-needed efforts. He expects legislation to pass that negates the need for a range day. He firmly believes that one day on the range does not offer proof of proficiency and that mentoring is an avenue he’ll be seeking to explore going forward. Traditional classes and range days will still be held for those who prefer them.

Eventually, of course, McCarty was invited on a hunt. He hadn’t wanted to admit that he never hunted, but he found his mentor, who sent him to a specific tree and told to get in the stand and wait. Then a young, inexperienced deer met a young, inexperienced hunter in the woods. McCarty took his first deer, and he’s had whitetail fever ever since.

In October the Oklahoma Department of Wildlife Conservation also partnered with the NRA to offer the free digital course as an option to its hunters. In-class instruction continues to be offered as well. The Sooner State joined Connecticut, Florida, New Mexico, Oregon, Texas and West Virginia. If you’d like to see the NRA Online Hunter Education Course offered in your state—without charge to either your state or you—let your state’s director of hunter education know.

The great thing about this course in addition to being comprehensive, fresh and informative for new hunters, is that it also stands as a refresher for seasoned hunters who continually seek to learn.