Providing America’s youth with opportunities to shoot and hunt is extremely important. Just imagine how many kids, if given opportunities, would become lifelong target shooters, hunters and advocates thereof if they were exposed to such all-American traditions. As mentors, we can provide those opportunities and create new hunters and shooting-sports enthusiasts—a positive move at a time when the number of American hunters is in decline. Fortunately, in addressing this decline, the national NRA-backed R3 movement to recruit, retain and reactivate new hunters is taking hold throughout the hunting community and efforts continue to expand.

Of course, when you introduce people to shooting and hunting, it’s equally important to ensure they enjoy the initial experience. A positive first impression helps retain their interest, and they’ll more likely want to shoot and hunt again in the future. That means they must be comfortable, which includes being outfitted with the correct firearm. The hard-hitting recoil and overpowering report that large-caliber firearms unleash may frighten young people and cause them to shoot poorly or dislike shooting altogether. Add to this a length of pull and drop at comb, for example, that are better suited for an adult male, and it’s a recipe for disaster.

Having had the pleasure of introducing numerous women and youth to shooting and hunting, I make it a goal to foster positive experiences with comfort being second only to safety. Rather than hand them one of my personal guns, I match them with the correct firearms when it comes to caliber and fit based on their physical statures. Here are the steps I take to do it. 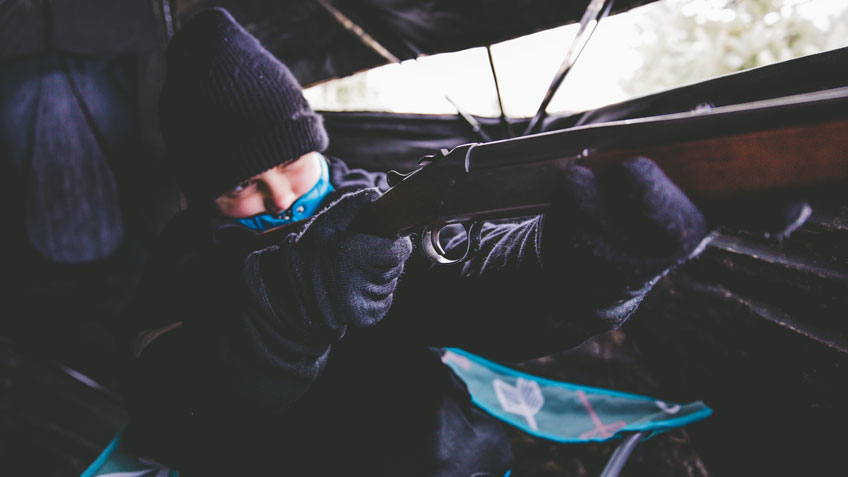 Hunting in cold temperatures means dressing warm, and bulky clothing will only worsen the matters if you put an ill-fitting firearm in a youth hunter’s hands. (Image by Becca McDougal.)

1. Begin with a Small-Caliber Firearm.

For someone who’s never handled or fired a firearm, I begin at the elementary level. I provide lots of instruction on firearm safety and how to operate different types of firearms. I do this before I ever put a new shooter or hunter behind a gun at the range. Once I feel they’re ready to shoot, I typically don’t hand them the firearm with which they’ll be hunting. I begin with a low-recoil, low-report firearm like an air gun or .22 LR.

As I assist them with shooting, I instruct them on NRA shooting fundamentals—aiming, breath control, trigger control, etc.—as trigger-punching will cause flinching and flinching will cause missing. Some kids understand this concept quickly, while others need more coaching before they develop good shooting habits. I note their reactions and tendencies with each shot they fire. How they handle and shoot that non-hunting caliber informs me on what they can handle in terms of a hunting caliber, although I intently consider their physical stature as part of the equation, too. 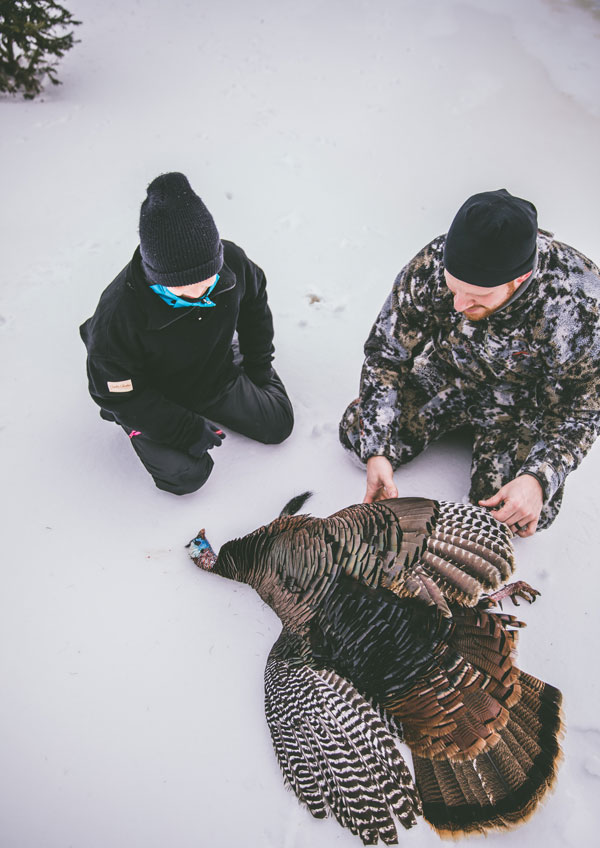 Matching youth hunters with the correct firearms is one step to creating an enjoyable first hunting experience. (Image by Becca McDougal.)

2. Graduate to a Hunting Caliber.

Youth hunters range in size, most being much smaller than a grown man like myself. Of course, some able-framed teenagers can handle and shoot my 12-gauge shotgun or .30-06 Springfield admirably, but a young girl, like my 9-year-old niece who I took turkey hunting this past spring, practically would end up in the next county from the recoil larger gauges and calibers generate. To that end, I’ll use her as an anecdotal example of how to choose an appropriate hunting caliber for youth.

When I helped young Anika purchase her turkey license, I had to create a customer account for her with the Wisconsin state wildlife agency. When I asked her for her physical weight, she replied, “Um … 77 pounds.” I chuckled at her precision, but quickly realized I’d have to carefully match the tiny girl to a suitable shotgun. I probably could have found her a manageable 20-gauge, but it would have recoiled too hard considering she had little experience with shooting firearms. The last thing I wanted to do was make her afraid of guns by going too big.

I helped her shoot several rounds with her father’s .22 LR, and she proved she could hit the mark. Next, I moved her into a borrowed .410-bore shotgun. I loaded it with light field loads and got her accustomed to the slightly louder report and recoil. While observing and assisting her with shooting it, she handled it well. I felt moving her up to a 20-gauge was senseless. Also, I held back the turkey loads until the hunt because I wanted her to shoot at a turkey with the same level of confidence she had at the range with the low-recoil field loads. Had I been taking her deer hunting, I probably would have put her behind a .223. Again, with her small, lean frame, anything larger would make her jumpy based on my observations during our range time.

Once you’ve chosen a suitable caliber, comfort is key. That’s especially true when dressed in hunting apparel. Hunters must be able to pull the buttstock tight against their shoulder to easily reach the trigger. They also must be able to reach the foregrip with their non-dominant hand. That’s exactly how the aforementioned .410-bore fit my niece.

Now, I understand it may not be a wise investment to purchase a firearm specifically for a youth who has never hunted unless you’ll be using the firearm with other similar-sized youths. This is where some networking will prove beneficial. Whenever I’ve mentored youth hunters, my grandpa has generously loaned me one of his smaller-caliber guns. If you have friends who own guns in the caliber you’ve selected for your youth hunter to use, I’m willing to bet that most happily will contribute to your good cause and loan you one.

Of course, when borrowing guns from others, you may not find one that’s 100 percent perfect in fit and feel, but you usually can get close. The most important considerations after caliber selection are length of pull and drop at comb. If these aren’t right, your youth hunter will struggle to shoulder and aim properly. Accuracy will suffer. 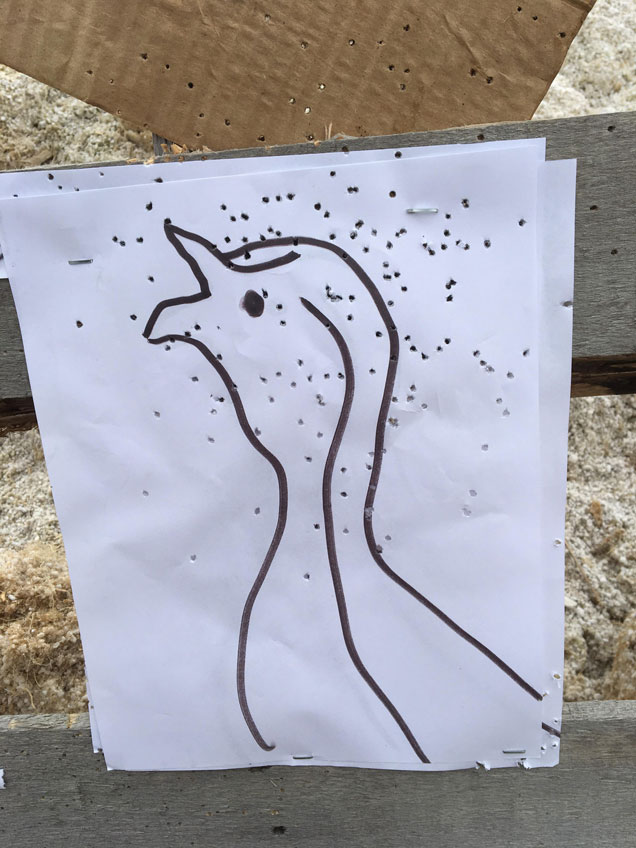 Folks often misconceive that power kills, but shot placement is far deadlier. This payload dealt by a .410-bore, in fact, is deadlier than a flinched 12-gauge pattern that hits the turkey in the body. Don’t over-gun youth hunters. Put them into a firearm they can shoot accurately and confidently. (Image by Darron McDougal.)

Often people misconceive that the most powerful firearms are best for hunting. That isn’t true. Shot placement wins every time. A small-caliber firearm that a youth can handle and manage will allow him or her to shoot more accurately and with greater confidence.

Anika is proof. When she stared down the .410-bore barrel on a strutting gobbler, I didn’t question if she’d kill him. Because I’d put her behind a gun she could manage confidently, she crumpled the gobbler in his tracks at 18 yards. I could see in her eyes that she thoroughly enjoyed the hunt, and I attribute that, in part, to outfitting her with an appropriately-powered shotgun that fit her. I set her up to win, and because of that, she said she’d like to go hunting again—the result every mentor desires. Enjoyment of the sport is what every mentor strives to foster.