What American Hunters Can Expect from the NRA in 2020

Today as we ring in a new decade, we know it will bring new cultural, political and demographic challenges to the future of hunters, hunting and wildlife conservation. Fortunately, we also know the more things change, the more some things remain the same as the ever-constant NRA remains on the front lines defending hunting and our all-American way of life.

As the 2020 elections approach, it is a blessing to know we can count on the NRA to stand with us as it always has. From past experience, we know we can rely on the NRA Institute for Legislative Action (NRA-ILA) to expand and protect our hunting rights as it maintains representatives in our nation’s capital and every state across America. We know that NRA-ILA, led by Executive Director Jason Ouimet, will defend us against anti-hunting ballot initiatives designed to erode hunting and destroy our hunting heritage. We know it will lead the charge to add Right to Hunt and Fish constitutional amendments in states that do not yet have them, providing permanent protections for hunters and science-based wildlife management from animal rights extremist groups trying to ban all hunting. We know it will fight anti-hunting laws and regulations by challenging them in court. And it is a given that NRA-ILA will grade elected officials and their challengers on their support for hunting and the Second Amendment so come Election Day on Nov. 3, we will know which candidates support hunting as we head to the polls. 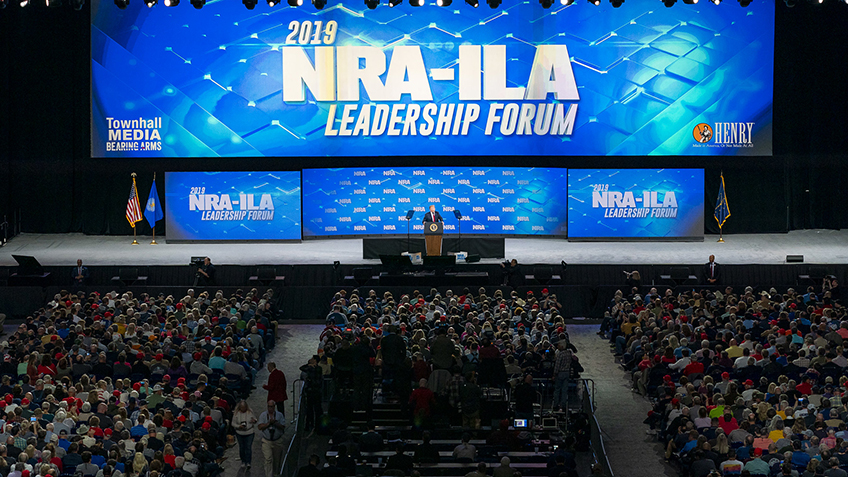 President Donald J. Trump delivered his remarks at the NRA Annual Meeting and Exhibits last year in Indianapolis. You can expect that NRA-ILA will continue to grade politicians on how strongly they support hunting and our Second Amendment. (Official White House image by Tia Dufour.)

On the safety and education front, it is also a given that NRA General Operations will continue to offer the hunter education and training programs that ensure hunters are skilled, responsible and ethical afield. For just two examples—thanks to NRA Hunter Services—70 years after spearheading hunter education in 1949, the NRA is the only organization to offer state-of-the-art, free, online hunter education and conducts the NRA Youth Hunter Education Challenge—the most comprehensive youth hunting program in all of North America.

And when it comes to NRA Publications, we NRA members and hunters will continue to count on receiving NRA’s American Hunter, the largest all-hunting publication worldwide, while offering this NRA Hunters’ Leadership Forum website. Dedicated to monitoring and reporting on the news and issues impacting hunting’s future, NRAHLF.org is perhaps our most critical tool in remaining abreast of the issues and the actions of those who seek to destroy us.

In short, the NRA will continue to do what it has always done: fight for the future of legal, regulated hunting; promote our all-American hunting traditions; provide the tools to make hunters safe in the field; and celebrate and stand with hunters in 2020 and beyond.