On Dec. 6, hunters in Utah got an email from the Division of Wildlife Resources indicating that the state’s tundra swan hunt was ending immediately—two days before its original Dec. 8 closure. All permit holders were made aware that it was no longer legal to harvest a swan. For the first time in the 57-year history of the state’s annual tundra swan hunt, it was closed early. Is the closure a harbinger of negative impacts on an endangered species, or, is it actually an indicator of successful recovery?

The hunting of swans is carefully regulated by the U.S. Fish and Wildlife Service (USFWS) because the less populous trumpeter swan (Cygnus buccinator) is sometimes found with tundra swans (Cygnus columbianus) and the two species are similar in appearance. Trumpeter swans were nearly eliminated in the United States by the early 20th century but a large population was located in Alaska in the 1950s, which became the basis for reintroduction of the birds to their traditional ranges. Today trumpeter swans have rebounded and their numbers are increasing.

Utah’s trumpeter swans are considered part of the Rocky Mountain Population (RMP) of trumpeter swans including breeding populations in Idaho, Montana and Wyoming. Many conservation efforts over the last 20-plus years have focused on increasing trumpeter swan numbers in the RMP. Those efforts have included habitat improvement, the encouragement of trumpeter migration dispersal, captive breeding/release and even feeding programs. 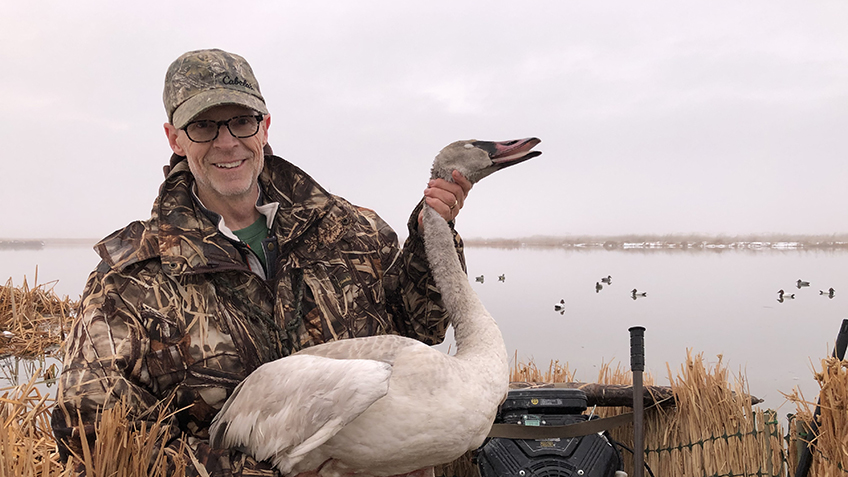 The author shows off a juvenile tundra swan he harvested during Utah's legal and regulated tundra swan hunting season. The season closed early for the first time since it was established, a testament to the efforts of state wildlife agencies and hunters to conserve the birds. (Image by Alan Peterson.)

Many of these efforts have been undertaken in the Red Rock Lakes and Henry’s Fork areas of Idaho and Montana surrounding the Yellowstone National Park region. Red Rocks Lakes National Wildlife Refuge was established in 1935 in order to help struggling trumpeter swan numbers. Led by the USFWS, and often paid for by Pittman-Robertson (P-R) Act funds, these efforts have been very successful in bringing trumpeter numbers in the Rocky Mountain Population from around 100 to over 1500 trumpeter swans in the last 20 years. According to the continent-wide survey undertaken every five years, the trumpeter population has increased from about 4,000 birds in 1968 to about 50,000 birds in 2010. Today trumpeter swans are considered a species of “least concern” by the International Union for the Conservation of Nature.

According to Utah’s Division of Wildlife Resources' Migratory Game Bird Program Coordinator Blair Stringham, “Restoration efforts for the trumpeter swan population have been a huge conservation success. Populations have increased to the point we can offer more hunting opportunity. We can also harvest more trumpeter swans and not have an impact on the population.”

The opportunity to pursue swans is an important example of the wildlife conservation success that can be achieved through the combined efforts of federal and state agencies and hunters to preserve and protect habitat and species. Federal agencies have provided planning, funding and research as states have implemented those plans, often paid for by P-R funds along with license fees and taxpayer monies. It goes without saying that any conservation initiatives to save trumpeter swans benefit untold numbers of other species. Hunters’ efforts ripple throughout the ecosystem.

Swans In Flight
Enjoy this peaceful short on swans in flight and at rest, filmed by the author.

Perhaps the greatest challenge facing hunters is distinguishing these two large white waterfowl species from one another. Hence, the careful federal regulation. In Utah, the state instituted an online orientation course that hunters must pass before they can apply for a permit. The course helps hunters understand regulations but, most importantly, helps them identify trumpeter swans from tundra swans. Stringham believes the course has been effective in saving many trumpeters. The effectiveness of the course is evidenced by the fact that other states direct their hunters to Utah’s course.

Since 1962, when Utah became the first state to offer a hunt for the plentiful tundra swan, the quota has never been reached in any state. On average, no more than two trumpeter swans are taken each year in Utah. The previous high was seven trumpeters. Recently, because of the success of wildlife conservation efforts on behalf of the trumpeters, Utah increased the number of swan permits from 2,000 to 2,750. The USFWS increased the trumpeter quota from 10 to 20 birds. Few suspected that 2019 would see an early closure.

Utah hunters are required to bring a harvested swan into wildlife officials for positive identification within 72 hours. This way, the number of trumpeter swans taken can be monitored on a daily basis. Once the quota of 20 birds is reached, the hunt is closed. That number was reached on Dec. 6, mandating the first closure at any time, in any state. 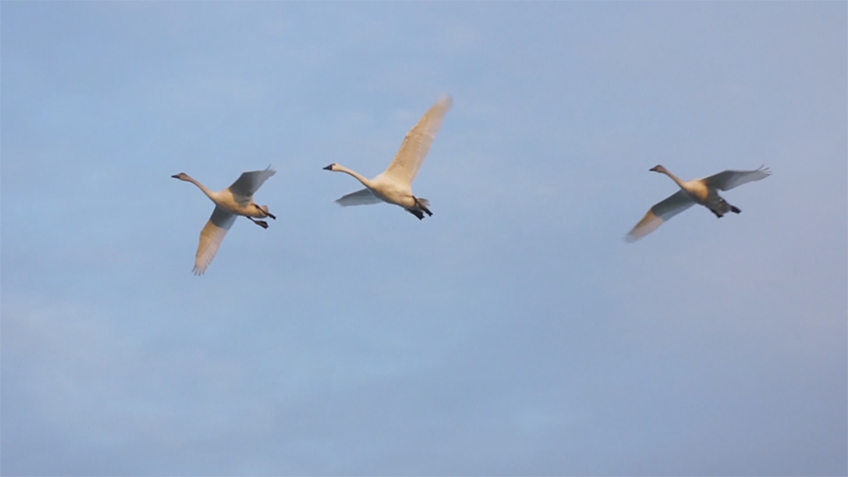 These tundra swans were working to decoys. (Image by Alan Peterson.)

Though exact causes of the increased take are still under investigation, many suspect weather as the culprit. In October 2019, the Idaho/Montana region that provides staging and wintering areas for trumpeter swans experienced early and unusually cold weather. Much of the open water relied on by trumpeters was frozen solid, forcing the birds to migrate farther south and west than they normally travel in search of open resting and feeding areas. Utah usually only sees around 100 trumpeters during the fall migrations but the marshes surrounding the Great Salt Lake retained open water that attracted increased numbers of trumpeters.

In Nevada, the federally mandated quota of five trumpeter swans was reached in the last weekend of the 2017 season so there was no closure, according to Nevada Department of Wildlife's Wildlife Staff Specialist Russell Woolstenhume.

Woolstenhume adds, “Swan hunting is a lot of fun. Nothing like having those big birds flying into your spread. Swans provide a great opportunity that is not available everywhere, and, as a result, we draw hunters from across the U.S. Hunting conditions are never crowded. Swans tend to be a pretty easy hunt compared to many more wary waterfowl species.” 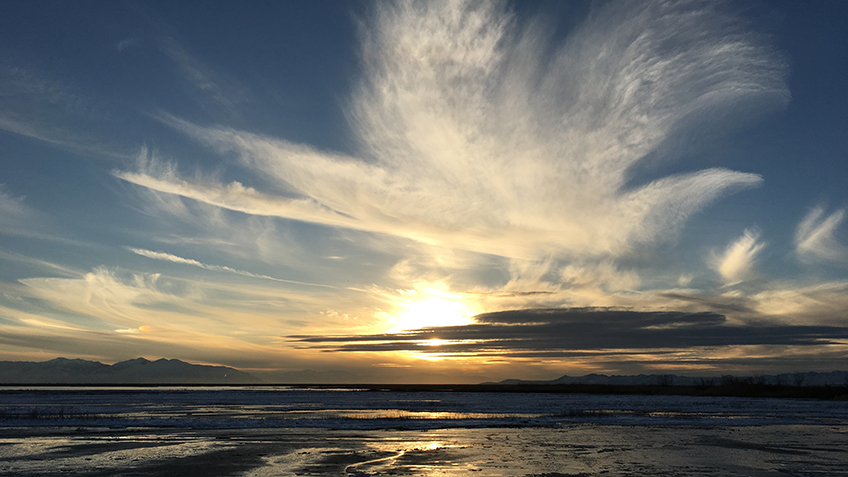 After a successful day of trumpeter swan hunting, the author stopped to fully appreciate the sunset over the Great Salt Lake marshes. (Image by Alan Peterson.)

Stringham agrees. “Swan hunting is very popular with hunters because many move through Utah, they are not hard to find and they are easy to pass-shoot or decoy,” he explained. “It is a lot easier to do than goose hunting because it requires less equipment and most are found on public hunting areas.”

Though all states where tundra swans are hunted encourage hunters not to take trumpeters, the limited numbers harvested during the waterfowl seasons have negligible impact on the trumpeter population. Hopefully, more normal future weather patterns and ever-increasing hunter education through courses such as the NRA’s free online hunter education course will see a return to the single-digit harvests of trumpeter swans.

So, even though a higher number of trumpeters were harvested in Utah this year, forcing the season to close two days early—because of successful efforts to conserve and increase the species’ population and hunters’ efforts to harvest only tundra swans—swan hunting will continue to provide waterfowlers a unique opportunity for years to come.

About the author: Alan Peterson is a filmmaker living in the paradise between the Wasatch Range and the Great Salt Lake. He loves shooting over his pudelpointer, Trigger; casting dries for cutthroats, and seeing cupped wings over decoys. All of this is only possible because of a very patient wife. Peterson is presently working on a documentary on the history of duck hunting on the Great Salt Lake and one on the life of fishing innovator, George Gehrke.