My time was running out. It was Thursday and Utah’s tundra swan hunt would be ending on Saturday. I’d waited three years to draw a tag and now it looked like my luck was going to be of one kind … all bad.

Through the generosity of my friend Jack I was in his boat on the frozen marshes of the Great Salt Lake hoping to make things work on my last opportunity of the season. The hard freeze had closed up the majority of the open water, so the remaining swans were concentrated. Running out on the canals to our chosen location, we saw several swans on the rest area—a good sign; they were still in the area. Hoping to intercept birds as they congregated for the night, we set up in open water on the flight path between the rest area and where the birds were loafing farther out on the marsh. Gray fog cut visibility to 200 yards. With the low light of December, even a bird as big as a swan, with that white plumage, would blend into the foggy air until it was right on you. The eerie hooting of dozens of tundra swans filled the air to the west. Louder and louder … there! A staggering line of great white birds appeared above us. Too far. But suddenly it seemed as if swans were crisscrossing everywhere near us, though still not within reach. The clock marched on.

Rather than try to swap loads back and forth between targeting ducks or the swans, I kept the Benelli ready for the big birds and gritted my teeth as divers piled into our decoys. One flight of a dozen drake canvasbacks came by so close I could see their red eyes fix on me as they passed. It was hard to watch them go and never fire a shot. Then it was 4:30, only a half an hour until legal shooting hours finished. The flurry of swans we’d experienced earlier was no more. Now, the only hooting was to be heard to the east of us on the rest area … 4:45.

Public-Private Partnerships
Cygnus columbianus, formerly the whistling swan, is now known as the tundra swan. The much less numerous trumpeter swan, Cygnus buccinator, is the largest bird in North America. These two birds are connected by more than just scientific nomenclature. They are also at the center of a conservation effort that reinforces a tried and true formula: hunters + conservation = success!

Management efforts of the U.S. Fish & Wildlife Service for swan populations include two goals: increasing trumpeter swan numbers and providing an opportunity to hunt the burgeoning tundra swan population. Hunter involvement is important to accomplishing both, particularly given the challenges that trumpeter swans have faced over the last century.

Hunters have played a role in this conservation success story in two ways. First, hunters contribute to increasing swan numbers every time they buy a license, duck stamp, box of shells, etc. License fees and Pittman-Robertson funding impact habitat preservation and restoration for trumpeters, tundras and every other wildlife species. Your P-R tax contributions impact every national and state waterfowl management area or refuge where trumpeters and tundras exist.

Second, hands-on conservation work by hunters continues to be an integral part of habitat restoration and preservation, reintroduction efforts and public awareness. One example is Utah’s Wasatch Wigeons Association—a conservation organization established by waterfowlers to improve and preserve habitat along the shores of the Great Salt Lake. Interested in contributing to the efforts to continue the trumpeter swan recovery, Wasatch Wigeons is working with USFWS, Utah Division of Wildlife Resources, The Trumpeter Swan Society and Wyoming Wetlands Society to help answer questions about the migration routes and patterns of Rocky Mountain trumpeters. Combining data from GSM collars deployed on mature birds and radio isotope studies collected from feathers, locations and seasonal timing can be monitored to inform decisions about swan hunting seasons, bag limits, etc.

Hands-On Swan Conservation
As a member of Wasatch Wigeons Association, a few short weeks ago I found myself in our state’s remote northeast corner with Utah DWR refuge managers, plus Bill Long, the founder of the Wyoming Wetlands Society. Again, I was hunting swans, but not with a shotgun. Along with Troy Burgess, Wasatch Wigeons president, we rendezvoused at Utah’s Browns Park Wildlife Management Area on the Green River in order to trap and collar trumpeter swans. Though the Browns Park attempt was concluded unsuccessfully after two weeks, it provided Wasatch Wigeons volunteers and Utah Division of Wildlife Resources personnel the opportunity to get valuable experience for future swan ops. 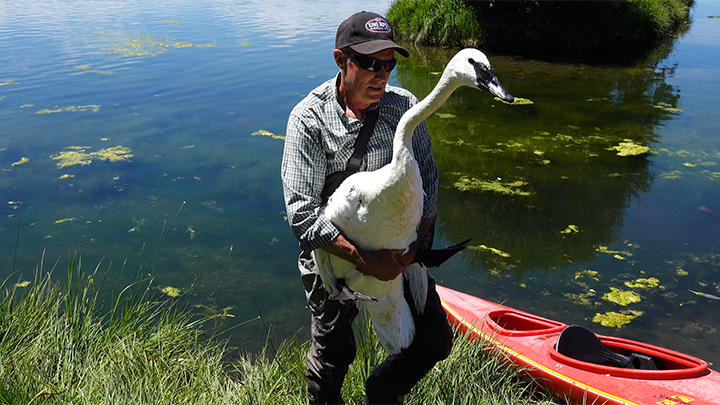 Another effort that has been very successful is the captive hatching and rearing of trumpeter swans. Most of the captive-bred swans raised and released into the Rocky Mountain population of trumpeters come from one outfit, the Wyoming Wetlands Society. A lifelong hunter and former state conservation officer, Long founded Wyoming Wetlands in 1986. The purpose of the society is to “aid in the restoration of the Rocky Mountain Population of the trumpeter swans and to protect, preserve, restore and enhance the wetlands they depend on.” Aided by part-time staffers who are, by-and-large, also hunters, WWS improves trumpeter swan numbers in many ways.

One unique method is through relocating problem beavers to areas where their hydroengineering talents can help restore wetlands that can provide nesting habitat for trumpeters. Most importantly, however, is the captive-breeding and release program that Bill has run for nearly 40 years. In that time, WWS has placed over 750 trumpeter cygnets throughout the Intermountain West. A major project in 2007, 2008 and 2009 involved bringing trumpeter swan eggs from Canada to be hatched, raised, and released into the Rocky Mountain population. That effort received significant Pittman-Robertson funding.

The combined work of state, federal and private organizations like The Trumpeter Swan Society, Wyoming Wetlands Society and Wasatch Wigeons Association has helped grow numbers to a level where they are now considered a species of least concern by the International Union for Conservation of Nature—just like their smaller relatives, the tundra swan.

Swan Hunting in 10 States
Meeting the management goal of providing the opportunity to hunt tundra swans allows USFWS to modify and regulate the thriving population. Today, tundra swans are hunted in 10 states: Utah, Nevada, Montana, Alaska, South Dakota, North Dakota, Virginia, North Carolina, Delaware and, new in 2020, Idaho. In order to protect trumpeters, a quota system was instituted in order to closely control any incidental take of trumpeter swans. However, the quota only applies to Utah and Nevada—areas where migration locations and timing coincide for both species. If the quota is reached, the hunt is closed immediately. In Utah, the quota has been as few as 10 and as many as 20. In Nevada, the quota is five. These numbers are established according to algorithms that ascertain the number of animals necessary for a population to sustain itself. USFWS has taken a very conservative approach that calculates a number that could be reached every year and still not have a negative impact on a population. Then, USFWS cut that number in half—just to make sure.

Since 1964, the number of trumpeter swans harvested never came close to the quota until 2019 and 2020. In 2019, Utah reached the 20-trumpeter mark two days before the end of the season. In 2020, the quota was reached 16 days early and the hunt was closed. The work being done by Wasatch Wigeons, Wyoming Wetlands, the Utah DWR, and other groups will help determine why so many more trumpeters have been harvested in the last two years. However, it is critical to note that even with the increased take, trumpeter swan populations are not in danger from hunters. In fact, increased harvest numbers may simply be an indication that the quota can be adjusted upwards in order to maintain tundra harvest objectives.

According to the 2015 North American Trumpeter Swan Survey (conducted every five years by USF&WS; 2020 survey numbers won’t be available until mid-2021), the estimate of successful breeding pairs of the Inland Population of trumpeters reached more than 27,000 birds, exceeding the management goal by 1,200 percent! Since 1995, The Rocky Mountain population (part of the population that migrates through Utah) has increased 644 percent! The smaller cousin, the tundra swan, has reached a continental population greater than 200,000. 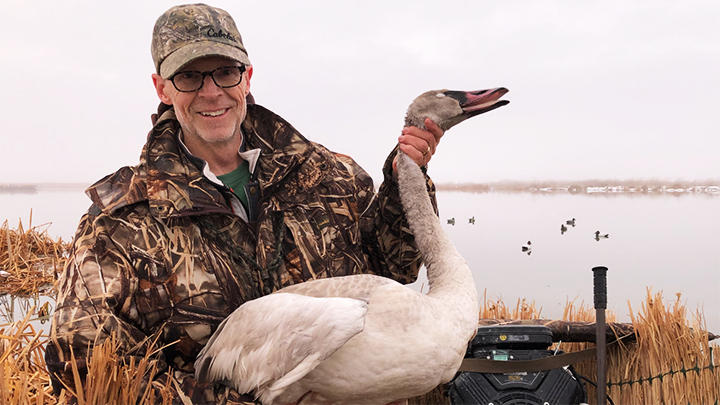 After the author helped trap and collar trumpeter swans, he took part in Utah's tundra swan hunting season, and in its waning moments took a juvenile male on the Great Salt Lake.

Moments Like These …
But at 4:50 p.m. in the last hours of my swan hunt, I didn’t need 200,000 tundra swans, I just needed one. And, here it came. Low over the cattails and phragmites, a single, solitary juvenile tundra swan emerged out of the rapidly darkening horizon. If it stayed true, it would pass us close enough for a shot. My racing heart worried me that I might succumb to the waterfowl version of “buck fever.” The young bird started to angle off. It was now or never. Safety off, swing through, a little more lead just in case, and … my hunt was over.

As I trudged through the marsh mud and still water to retrieve the bird, I realized it was a longer shot than I’d thought. Their size and speed are deceiving. Luckily, I’d added that extra lead. As I tied my notched tag around its leg, there was a satisfaction that was more than from just a successful hunt and the holiday meal this bird would provide. I knew my efforts and those of millions of other hunters had made this moment possible.

As with the wild turkey, Canada goose, elk, pronghorn and white-tailed deer, when hunters get involved, wildlife and habitat flourish. Hunters have helped save and restore the trumpeter swan and ensured the opportunity to hunt tundra swans will continue to be a part of our future.