If a proposal by the U.S. Fish and Wildlife Service (USFWS) is approved, hunting and the hunting tradition will be a required element in future Federal Migratory Bird Conservation Stamps, more commonly known by American hunters as the Duck Stamp.

In a press release announcing the proposal, the USFWS noted that “The Service’s proposal would require entries beginning in the 2020 contest to include one or more visual elements that reflect the theme ‘celebrating our waterfowl hunting heritage.’ They must also adhere to existing contest regulations that require a live portrayal of one or more of the five eligible waterfowl species for that year (brant, gadwall, cinnamon teal, lesser scaup and red-breasted merganser for 2020) as the dominant foreground feature. Contestants will be judged on the quality of their art and how well they illustrate the theme.”

The USFWS proposal also requires that Duck Stamp contest judges “must have an understanding and appreciation of America’s waterfowl hunting heritage and be able to recognize objects related to waterfowl hunting.”

“The Duck Stamp has always been a way for us to celebrate our nation’s waterfowl with beautiful works of art,” said USFWS Director Aurelia Skipwith. “With these changes, we can now also honor the contribution waterfowl hunters have made over so many decades to conserving these species and a host of others that call our wetlands home.” 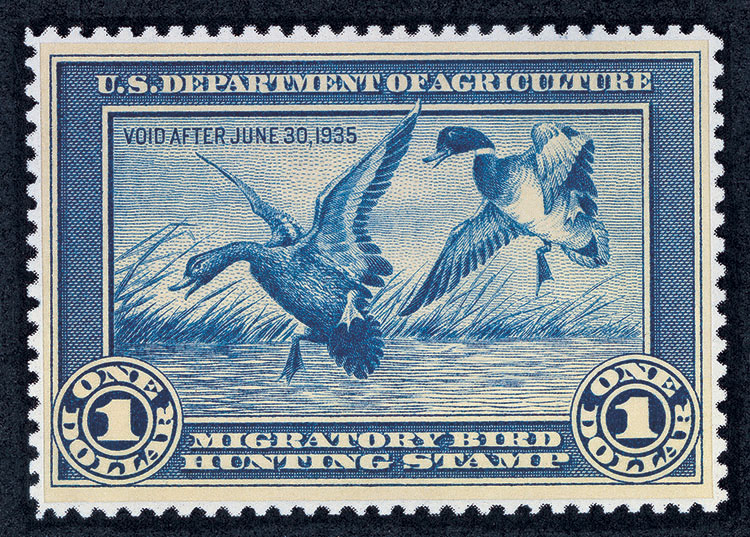 The Federal Migratory Bird Hunting and Conservation Stamp, commonly called the Duck Stamp, was first issued in 1934. The USFWS is proposing that hunting be represented in Duck Stamps going forward since hunters contribute so much to waterfowl conservation and habitat restoration. (Image courtesy of the USFWS.)

Skipwith added, “Without the hunting community, we would not have nearly the wealth of protected wetland habitats that we do today, including within the National Wildlife Refuge System, which do so much for local communities and economies. This is our way to acknowledge their significant contributions to conservation.”

One of the most effective conservation tools for over 80 years, the Duck Stamp is a required purchase for any waterfowl hunter 16 years of age or older. But it can be bought by anyone, and it also operates as a free pass into any national wildlife refuge that charges an entry fee.

Approximately 1.5 million Duck Stamps are sold annually; as of 2019, Duck Stamps have generated more than $1.1 billion for the preservation of more than 6 million acres of waterfowl habitat in the United States.

The USFWS is now seeking public comments on the proposal. Have an opinion? Log onto the Federal Register, and search under Docket Number: FWS-HQ-MB-2019-0105.

The 2018 Duck Stamp Contest required the same proposed hunting background for judges, plus mandated that entrants include one or more visual elements that reflected the contributions waterfowl hunters make to habitat conservation. This produced the current 2019 Duck Stamp, “Wood Duck & Decoy,” by Minnesota artist Scot Storm. 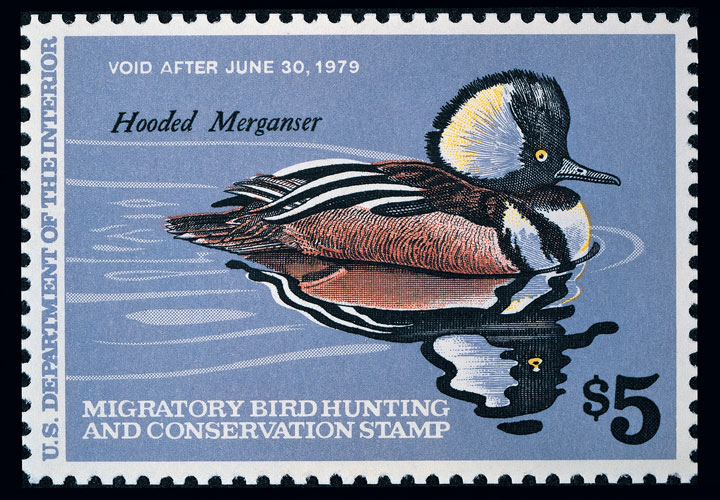 This Duck Stamp from 1978-'79 featured the hooded merganser. Of course, waterfowl hunters collect the stamps, but so, too, do tens of thousands of non-hunters who want to contribute to waterfowl conservation. (Image courtesy of the USFWS.)

According to the Department of The Interior website, “The Federal Duck Stamp is one of [America’s] oldest conservation efforts. The Federal Migratory Bird Hunting and Conservation Stamp (commonly known as the Federal Duck Stamp) was born in the Dust Bowl days when President Franklin D. Roosevelt signed the Migratory Bird Hunting Stamp Act in 1934 to protect wetlands that are vital to the survival of migratory waterfowl. Those same wetlands also benefit countless other non-waterfowl species and us.”

Duck Stamps have also become collector’s items, thanks in no small part to the program’s 80-year longevity. And while waterfowl hunters do buy and collect the Duck Stamps, so, too, do tens of thousands of non-waterfowlers and those who want to support waterfowl and wetlands conservation.