USFWS Director Pledges to Fight for Sportsmen at Hunters’ Convention

“Some call hunting and fishing a way of life. I call it living.”
–Aurelia Skipwith, Director, U.S. Fish and Wildlife Service

New Director of the U.S. Fish and Wildlife Service Aurelia Skipwith took center stage at the Houston Safari Club Foundation’s Worldwide Hunting Expo and Convention last night, engaging the crowd as she stood with sportsmen and vowed to uphold the Trump administration’s commitment to the common-sense, science-backed management of wildlife as touted in the North American Model of Wildlife Conservation (NAMWC). Her mission: to secure wildlife’s future by balancing the interests of federal and state agencies, tribes and private landowners based on wildlife science rather than bureaucracy.

“One reason President Trump put me in this job is because I fight,” the lifelong hunter emphasized early on in her keynote address, underscoring that the successful NAMWC establishes the fact that wildlife belongs to all of us and that fish and wildlife populations need to be sustained for future generations to enjoy. “That is what brings us together,” she said, a fitting comment considering the HSCF’s convention theme is “Together 2020.”

“I applaud this year’s theme,” she said. “Working together—it’s how we will do business. Now more than ever, we need cooperation and trust among all parties at the table in fighting for what is right for our natural wildlife resources.” True to her word, as NRAHLF.org noted when she was confirmed to her post last month, one of her favorite parts of the job is spending time afield visiting America’s national wildlife refuges and other public lands to check out the projects underway and talk with all stakeholders to understand their perspectives.

For an example of how the conservation of fish and wildlife requires strong partnerships between communities and the USFWS, Skipwith highlighted the implementation of the Department of The Interior’s Secretarial Order 3362 prioritizing and enhancing Western big game habitat, winter ranges and migration corridors. As NRAHLF.org reported, the move was a critical step in ensuring collaboration between the DOI’s federal agencies such as the USFWS and Bureau of Land Management, state fish and wildlife agencies and volunteer private landowners to identify and improve critical habitats across the Western United States. 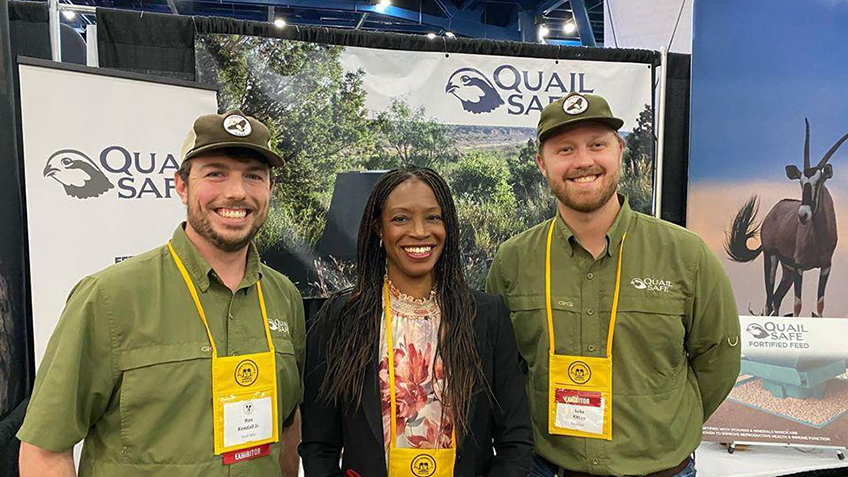 Aurelia Skipwith, the recently confirmed director of the U.S. Fish and Wildlife Service, stopped off at the Quail Safe Fortified Feed booth at the Houston Safari Club Foundation Expo and Convention, Jan. 24-26. Skipwith pledged to continue to support the North American Model for Wildlife Conservation, which is common-sense, science-based wildlife management that includes hunters in the process. (Image courtesy of the USFWS.)

Skipwith, who holds a bachelor’s degree in biology from Howard University, a master’s degree in molecular biology from Purdue University and a doctorate from the University of Kentucky’s College of Law, also knows that working together is how we American hunters will fight the dishonesty animal rights extremists work into every conversation about mainstream American hunters and legal, regulated hunting. “I am tired of seeing the constant lawsuits filed against us,” she said, referring to the stream of roadblocks animal rights extremists put forth to stop science-based wildlife management from taking place. “To the liberal extremist corporations who do nothing for wildlife and the environment, I say, ‘Why don’t you buy a sport hunt?’”

Understanding the importance of where sportsmen’s hard-earned dollars go, she promised, “I will fight every single day to do what is right. Conserving our national heritage is a link to our democracy.” Contrary to what liberal extremists believe, she noted that even as far back as a century ago U.S. President Teddy Roosevelt knew hunters and anglers were the key to conservation success and today remain the largest contributors to wildlife conservation. With seven million-plus jobs created in America since the start of the Trump administration, she emphasized, “So you, Houston Safari Club Foundation, are a key player and are a big part of the economy so give your leadership and yourselves and volunteers a round of applause.”

Crediting hunters and anglers with continuing to lead the way on the wildlife conservation front through the Pittman-Robertson (P-R) Act, Skipwith bonded with the crowd over the mutual enjoyment of America’s traditional outdoor sports. “Some call hunting and fishing a way of life; I call it living,” she said, adding she was just out hunting before traveling to the HSCF Expo. “I grew up in Mississippi and if we didn’t grow it or kill it, we didn’t eat it.” So it’s no wonder Skipwith was quick to call attention to President Trump during her speech, touting, “The man who put me in this job has opened 1.7 seven million acres for hunting and fishing since he began his administration.”

Energized by her commitment to upholding the NAMWC, one thing was clear: Sportsmen can rest assured USFWS Director Aurelia Skipwith will serve the American people by doing what is best for wildlife. No wonder Secretary of The Interior David Bernhard looked forward to her prompt confirmation and countless hunter-backed conservation groups including the National Rifle Association applauded her renomination to the post last July, praising her dedication to wildlife conservation and protecting America’s hunting heritage.

About the HSCF Hunting Expo and Convention
The HSCF Worldwide Hunting Expo and Convention, Jan. 24-26, is a three-day event showcasing hunting and fishing outfitters from around the world, hunting gear, clothing, firearms, artwork, jewelry and outdoor-themed home décor. Every dollar raised goes toward the HSCF’s mission of preserving hunting through education, conservation and promotion of our hunting heritage. As one of its seven underwriting sponsors, the NRA Hunters’ Leadership Forum supports the fact that together is how we support the education of our future researchers and decision-makers and provide the funding needed to support and protect wildlife and its habitat into the future.