If you want to get your Irish up, just go to YouTube and search “hunter harassment.” In 2018, a woman in Knoxville, Tenn., took a dog she found and removed its two collars, one of which was a GPS locator. She threw the ID and tracking collars in a dumpster and took the dog to an animal shelter, reporting it as a stray. She did this during a legal, regulated black bear hunt, a hundreds-year-old tradition in the Volunteer State. She was arrested and charged with theft, removing a tracking device and for violations against the NRA-backed Tennessee Hunter Protection Act.

In 2015, two pheasant hunters were set up deep on public land and were harassed by an abutting neighbor running his tractor at the edge of his property and yelling at them in an effort to disrupt the hunt. The man was nonplused when the hunters informed him that the Minnesota Department of Natural Resources (DNR) would consider what he was doing hunter harassment. One hunter had been filming their hunt and talked to the harasser wearing a hot mic. The video was pivotal to proving the case, and the conservation officer allowed the hunters to decide if the man would be given a warning or a citation. 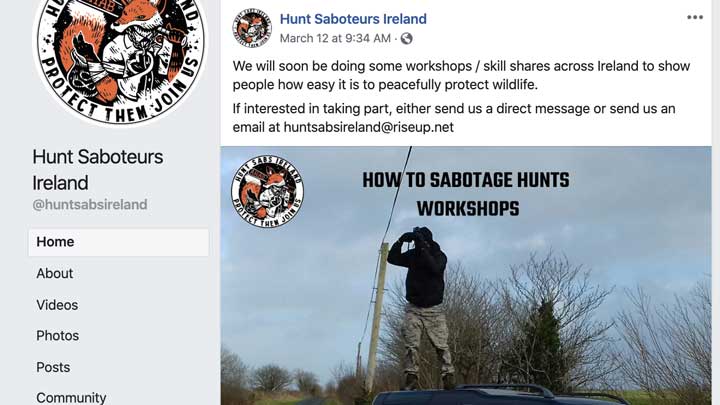 Hunt Saboteurs Ireland is hosting roving workshops to train people on how to disrupt legal and regulated hunting. The Irish live under some of the strictest gun laws in the world, and yet the violence perpetrated against hunters and their animals goes relatively unanswered under weak trespassing laws.

Another hunter was urban hunting in a deer-reduction zone on his own property. He had deer relaxing under his stand. Three times someone drove by sounding an air horn. When the disrupter or disrupters realized the city deer weren’t bothered by such noises, they called the police to interfere with the hunt. Even the police were lecturing the hunter about being aware of nearby children, to which the hunter responded that the neighbors needed to be aware that he hunted. Wildlife law enforcement officers were called and notified the neighbor that the hunter was lawfully hunting on his own property. Hopefully, they educated the police as well.

Somehow, though, these examples pale in comparison to the antics of hunt saboteurs, or sabs, in Ireland. In January, as reported by the Limerick Leader newspaper two anti-hunters were arrested for trespassing. The hunters vowed that nobody would stop their thousands-year-old hunting traditions, and the saboteurs promised to return, theoretically to protect the fox or whatever game was being hunted while in actuality it would be to harass hunters and their dogs and horses. U.S. hunter harassment issues, however infuriating—and we must strive to hold our tongues and tempers to represent our community in a positive light—pale in comparison to the level of violence Irish hunters face.

The hunt saboteurs dress similarly to antifa members, head to toe in black with face masks. The animal rights extremists descend on hunts in bands and, as in this case, may not even be from Ireland, but from the U.K. or Sweden. They spray aerosols on the dogs to disrupt the fox scent trail, scare horses and use vehicles to likewise interrupt the hunt. They intimidate youth hunters, the children of farmers who allow the hunters access to their property and the elderly. In England, things have turned violent as the sabs incessantly entice physical contact and then play the victim for the cameras. 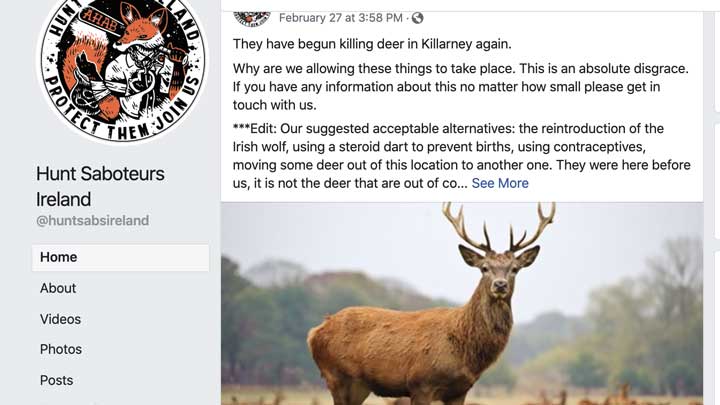 Clearly, like animal rights extremists worldwide, the Irish hunt saboteurs understand little about wildlife management and the pivotal role legal and regulated hunting plays in maintaining healthy populations of species. They think adding an apex predator to the mix or expensive and unreliable sterilization is the answer.

Organizations such as the Irish Council Against Blood Sports are trying to get hare coursing and fox hunting banned on the Emerald Isle, but the Irish hunters have proved more tenacious than their counterparts in England. There, fox hunts have been banned, but English hunters still run their hounds using laid down scent and not live animals. Hunt Saboteurs Ireland hold “How to Sabotage Hunts” workshops across ole Éire, claiming they do so peacefully, when in reality they provoke confrontation as a means to their end.

As is common with animal rights extremists in every country, they don’t care about managing wildlife populations at healthy levels based on science. They don’t care if the animal dies anyway or if the species is overpopulated, eating itself out of its habitat and becoming stunted and sickly because of that. They simply want to stop others from enjoying traditions as old as man himself because they themselves have chosen not to hunt. If St. Patrick drove the snakes out of Ireland, clearly he can drive the anti-hunters away too. 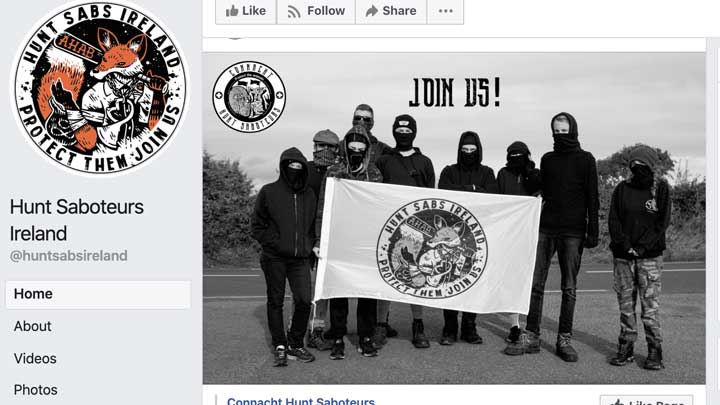 Hunt saboteurs in Ireland dress and act the part of terrorists. They intimidate and trespass, wasting hunt time by being slow to leave when asked. Worst of all, they interfere with hunters and their dogs and horses, provoking violence and then playing the victim for the camera to try to sway public opinion.

Here, we can only be grateful we have the Second Amendment and the National Rifle Association to defend our ability to protect ourselves against physical violence from mobs and to enjoy and pass on our strong hunting traditions.

The full article is included below for those who may not have access to the Limerick Leader.

TWO hunt saboteurs who were arrested by gardai in Bruff for trespassing have vowed to return to County Limerick in the “near future”.

In turn, Scarteen Hunt, which was targeted by up to 20 “sabs” over the weekend, has vowed not to let them interfere with their country tradition which goes back centuries.

Hunt Saboteurs Ireland said their purpose is to “prevent the murder of wildlife in Ireland by using peaceful direct action”. They said they were “following the law” in County Limerick.

Bruff Superintendent John Ryan said two males were arrested at Boheroe, Dromkeen on Saturday for trespassing. They were brought to Bruff garda station, questioned and released without charge. A file will be prepared for the DPP.

“We will certainly be enforcing the legislation in relation to any breaches. We have to ask everybody to operate within the laws of the land. We can’t let any particular group step outside it. That is our stance on it,” said Supt Ryan.

“It was hugely welcome. We called the gardai. Their (hunt saboteurs) policy is intimidation and they are looking for confrontation.

“We felt intimidated and they were trespassing. We get permission for every where we need to go. We are blessed with, and very thankful to, the farmers in our area for access,” said Mr Ryan.

He said it is very intimidating to be faced with up to 20 people going around with masks and dressed all in black.

“They are frightening young people in the hunt and young people going about their business. There were two young kids on their lawn on Saturday and they were terrified. It is also very intimidating for elderly people,” said Mr Ryan, who added that this is the third time in six weeks they have been joined by hunt saboteurs. The previous two instances were in Caherconlish and Hospital.

“They carry around sprays to try and prevent the hounds from following the line of the fox. They interfere with the dogs who wouldn’t recognise them. Spraying dogs is an animal rights issue in itself,” said Mr Ryan, who concluded by vowing that the saboteurs will not stop them hunting.

A spokesperson for Hunt Saboteurs Ireland told the Leader they are an extension of the hunt saboteurs in the UK, formed in the 60s.

“There’s always been resistance to hunting. We are simply doing what is necessary. We use a variety of harm free methods to prevent the dogs from killing any foxes by distracting them and blocking the foxes’ / hares’ scent. We had over 20 hunt saboteurs (in Limerick) and many vehicles as resistance is growing rapidly in Ireland,” said the spokesperson.

Some of the 20 came from Sweden and England.

“It was a successful endeavour as we believe there were no kills as we know of and we made our presence felt. They were arrested for trespassing as they left the land as instructed. We will return to Limerick in the near future, absolutely,” said the spokesperson.