Article Calls Out Danger of Anti-Hunters Loving Animals to Death

It seems many non-hunters don’t realize hunters are wildlife conservationists, regularly confusing preservation with conservation. While I am a conservationist, I also am someone who has hunted and consumed many game animals, most of which have been older, more mature representatives of their species that some might even call a “trophy.” So, when talking about legal, regulated hunting with non-hunters it is refreshing to find a conservationist who does not personally hunt, or even agree with hunting, who has the common sense and logic to realize that without it, many wildlife populations would be wiped out in today’s world with increasing human-wildlife conflicts. I came across such a conservationist when I read the article “Loved to Death? The Risks of Simplistic Campaigning for Wildlife Conservation” by Dr. Amy Dickman, Kaplan Senior Research Fellow at the University of Oxford, on Aug. 5.

Posted to the Union of Concerned Scientists website, a U.S.-based forum for nearly 25,000 scientists, engineers, economists and other experts, the article explains that if there is no economic value to animals such as through hunting, local people see no reason to keep them around, whether it’s the African lion that Dickman says strives to coexist with humans in rural African communities or, in my case, the mountain lion that preys on ranchers’ livestock in my home state of Colorado.

Dickman’s story opens with the butchering of a cow that was attacked by lions near an Africa national park. As director of an Africa carnivore conservation project with 20 years of specialization in the human-carnivore conflict, she tried to persuade the local people not to kill lions in retaliation but admitted their fury toward them, and her as a conservationist, was understandable. Lions threaten local people’s livelihoods and the people themselves. 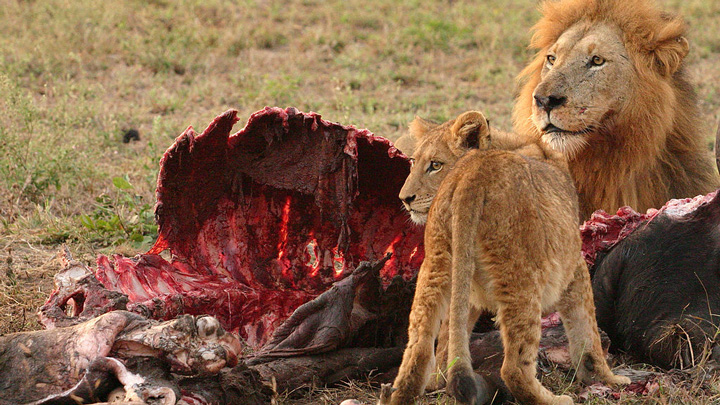 “From our field camp, we saw the impacts almost daily,” Dickman wrote. “Ravaged livestock, desperate people, snared leopards, poisoned vultures, speared lions, habitat cleared to deter wildlife. And despite the fear and challenges of these confrontations, I knew that as a conservationist it was imperative to properly understand key threats—and work together with very different people to reduce them.”

Her thoughtful analysis reminded me of the 2016 NRA Hunters’ Leadership Forum website article, “Are Anti-Hunters Loving Animals to Death?” That article tracked how animals not only still die without hunting but how “they die hideous deaths from disease, predation, starvation and dehydration,” explaining that choosing preservation over conservation gives you neither.

Dickman said the farther she got from the field, referring to the United Kingdom and the United States, the louder anti-hunters became. The more she defended hunting as a wildlife conservation tool, the more they threatened her life. Here are just a few of her science-based observations that make so much sense.

1. Those who purposely mislead the public and blame hunting divert attention from real wildlife conservation threats.

Dickman shares how anti-hunters are generally uninformed about major threats to wildlife, particularly human-wildlife conflict and habitat loss. Ignored is the fact that more habitat in Africa is protected in hunting reserves than in national parks. To prove her point, she recalls what happened after the 2015 hunting of Cecil the lion. Anti-hunters and the media used hunting photos to “enrage the public, generate clicks, encourage donations to campaign groups and enable people to feel they have impact just by signing petitions.”

In analyzing anti-hunters’ tactics, it’s no surprise that NRA Hunters Leadership Forum-funded (HLF) research shows the species that anti-hunters ridicule hunters over most are the charismatic megafauna like apex predators. African lions are in the popular consciousness so anti-hunting campaigns promote their charisma, collaborating with the media to incite emotion and outrage. Yet legal, regulated hunting never caused a species to go extinct, and there is no better proven alternative to wildlife management. No wonder every state wildlife agency in America is legislatively mandated to provide opportunities for hunting.

Tracking how misinformation does more harm than good, Dickman explains, “Trophy hunting [or just hunting] isn’t a major threat to wildlife, even for species like lions, and for some species, it has directly improved their conservation.” As the NRA HLF website shares, hunting, like photo tourism, provides a financial incentive to maintain wildlife and their habitats, but photo-tourism isn’t viable in most hunting areas. From firsthand experience, Dickman writes, “Hunting areas often act as buffers around parks, reducing hard boundaries and the intense human-wildlife conflict I had become grimly familiar with.” Yet the rights and conservation experiences of rural black Africans are often ignored, she adds, while Westerners’ outrage is overly weighted.

Dickman exposes a popular misconception of anti-hunters, who say hunting bans will benefit wildlife and decrease wildlife killings. Instead, she notes, “Wildlife will go from being a valuable resource into a cost, and will be exterminated, often using poison and snares. I doubt many people would donate to a campaign to ban trophy hunting if they realized it would lead to far more—and far worse—wildlife deaths.” Not only do they not benefit wildlife by pushing for U.S. trophy import bans, but they bury how hunter fees support conservation. 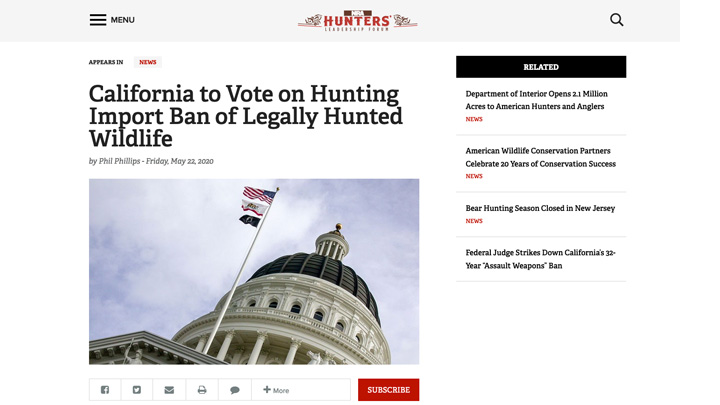 It’s a fact: Those who challenge anti-hunters experience hatred and death threats. As Dickman and her colleagues began supporting hunting in scientific journals and the media, they experienced more vitriol than when defending lions to angry locals. “Now, keyboard warriors sent barrages of threats and hostility, while a misleading press release—including quotes from people as eminent as Jane Goodall—painted us as ‘so-called conservationists’ being ‘complicit in cruelty [and a] conservation disaster.’”

3. Conservationists must address the challenges to wildlife’s future.

Dickman urges people to share the science upholding hunting as wildlife conservation. How else will decision makers make informed decisions?

Her conclusion: If legal, regulated hunting is banned, people in communities who live with wildlife will be disempowered, conservation efforts will suffer, and far more animals will die “appalling deaths.” “Those deaths will be largely invisible,” she warns. “There will be no media fanfare or campaigning—but their impacts will be profound. More blood will soak the grass, this time of snared, speared and poisoned wildlife. And this time it will be on the hands of those who enabled it, or who were silent when they saw the risks. I will not have that blood on mine.”

As Dickman’s article made the rounds in America’s wildlife conservation circles, Corey Mason, executive director of the Dallas Safari Club, which has worked for 39 years to promote wildlife conservation, education and advocacy, said, “As a fellow biologist, I am encouraged by Dr. Dickman’s pursuit of identifying means to further incentivize conservation and ensure those who live with and manage wildlife have the most prominent voice in their management.” Supporting her careful considerations, he added, “The Western world’s influence and negative impact on Africa’s wildlife continues through media campaigns, legislation and well-funded agenda driven organizations. I commend Dr. Dickman for objectively identifying the significant threats to wildlife and wildlife habitat and pushing through the rhetoric to make all aware of the consequences of their ill-advised actions.”

Thank you, Dr. Dickman, for understanding wildlife would be in trouble without hunting. Thank you for seeing its value as a wise use of our renewable wildlife resources and to local economies. Thank you for pointing out how the predator species that are at the center of many human-wildlife conflicts will be trapped, shot, snared and poisoned until they are gone if not given value through hunting. I only wish more people were less emotional about the subject and cared enough to learn and share the facts as you have.

About Dr. Amy Dickman, Kaplan Senior Research Fellow at the University of Oxford: Specializing in Africa’s human-carnivore conflict, Dr. Amy Dickman earned a master’s degree from Oxford University and a PhD from University College London. She has published over 80 scientific papers and book chapters on large-carnivore ecology and conservation. A member of the IUCN Cat Specialist Group, the Human-Wildlife Conflict Collaboration, the African Lion Working Group and the IUCN Human-Wildlife Conflict Task Force, Dickman is a National Geographic Explorer who has received numerous awards for her life’s work.

Editor’s Note: As Dr. Dickman draws her line in the sand, we recognize how hunting’s future depends on cultural acceptance. Be aware that anti-hunters purposely use the term “trophy hunting” to achieve negative public reaction to hunting. While all hunting can be considered “trophy” hunting as what constitutes a trophy is defined by the individual, as NRAHLF.org points out, “Legal hunting for a doe or a 10-point buck isn’t “wanton killing” just because someone takes a piece of his or her kill to a taxidermist.” Share that hunting is characterized by fair chase, meat consumption and conservation. And refer to what we do as legal, regulated hunting. This emphasizes it is not only controlled, but it results in healthy wildlife populations and is the opposite of poaching. —Karen Mehall Phillips