According to wildlife biologists, the anthrax outbreak among whitetail deer in Texas last June and July was one of the worst on record. The primary impacted area formed a triangle from essentially Sonora to Ozona to Eagle Pass and was confined to five counties encompassing over 4.2 million acres. “In the heart of this area, 2 million acres just south of Sonora, most all the white-tailed deer died,” said Wildlife Biologist Macy Ledbetter with Spring Creek Outdoors when questioned about the severity of the massive 2019 outbreak. “I know of several large ranches ranging in size from 16,000 to 24,000 acres that are totally devoid of whitetails, based on helicopter game surveys and daylight and nighttime observations. Properties on the peripheral of this central area reported losses of 50 to 85 percent of the deer on their property.” Many exotic species such as axis deer and aoudad sheep and even feral hogs were impacted. “Coyotes too, eating anthrax-killed deer carcasses, died and were found near dead deer,” he said. “Domestic livestock too was affected.”

Speaking from firsthand experience, Greg Simons, former president of the Texas Wildlife Association and owner of Wildlife Systems, said, “On one of the properties managed for a hunting group south of Ozona, we lost 75 to 80 percent of the whitetails. The deer which survived were mostly yearling and 2½-year-olds. I’ve heard a lot of country in the basic triangle that they lost an estimated 75 to 90 percent of the deer present and some properties reported 100 percent loss of whitetails.” He said that in the past, Crockett, Edwards, Kinney, Maverick, Sutton, Uvalde and Val Verde counties have had periodic outbreaks of anthrax, but never the severity experienced during the summer of 2019.

“I’ve been hearing in the basic anthrax area where it [anthrax] will likely continue to be present in the future that a few ranch realtors report land prices have taken at least a short-term price reduction since property values there have long been driven by recreation,” Simons continued. 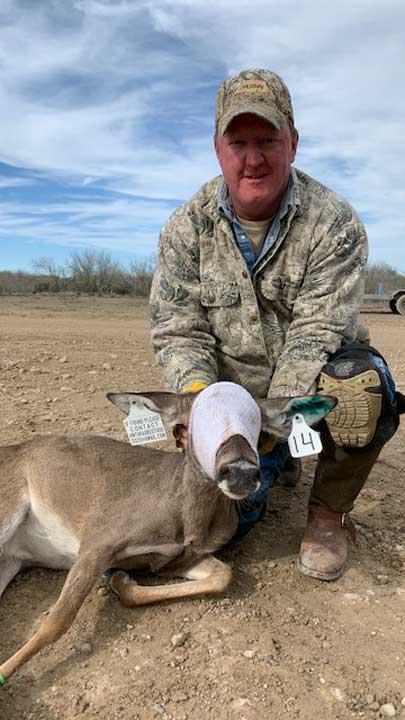 Ledbetter explained that the area affected by anthrax is basically rural where landowners and small-town business owners depend heavily upon hunting leases and hunters each fall to make ends meet. “Some leasees totally abandoned the region, others have decided to work with landowners to eventually bring back whitetails to the immediate area,” he said. “The economic impact of losing deer herds and the dollars of those who pursue them was and is dramatic and could be long-lasting.”

According to Bob Dittmar, doctor of veterinary medicine and the Texas Parks and Wildlife Department’s state veterinarian, anthrax is caused by a bacteria Bacillus anthracis found in the soil. The bacteria produces a toxin that destroys body cells leading to acute death. When the vegetative stage of the bacteria in the body is exposed to air it forms spores which can survive for many years. The incubation period for anthrax is three to seven days. Death usually occurs within 48 hours. A common sign of anthrax is bleeding from all the body’s orifices. As a zoonotic disease, anthrax mainly affects wild game and livestock but it also can affect humans who come in contact with sick animals, as noted by the Texas A&M Veterinary Medical Diagnostic Laboratory (TVMDL). TVMDL plays a vital role in animal disease surveillance efforts and urges anyone handling animals suspected of exposure to take necessary precautions, starting with wearing long sleeves and gloves. There is no real hotline to report anthrax or other wildlife diseases in Texas.  Reports about any suspected deer infected should go to local game wardens and wildlife biologists, and people should contact their local doctor.

Explained Dittmar: “Anthrax can occur anywhere in Texas, but historically is more prevalent in several of our southwestern counties near the Mexico border. In the summer of 2019 we had the proverbial ‘perfect storm’ of conditions that seem to precipitate more severe outbreaks: a mild, extremely wet winter in 2018-2019 followed by a dry summer. These conditions allow the spores to congregate on the surface of the soil and on plants where they can be inhaled or ingested. Also a higher than normal biting-fly population may have contributed. Thankfully with the onset of cooler weather the spores generally go dormant.”

Management of anthrax in free-ranging deer populations is at best very limited. Dittmar noted that the Texas Parks and Wildlife Department (TPWD), Texas Animal Health Commission and the U.S. Department of Agriculture are now conducting a survey with anthrax-impacted landowners to attempt to identify management practices that may be helpful in limiting the impact of the disease in the future. 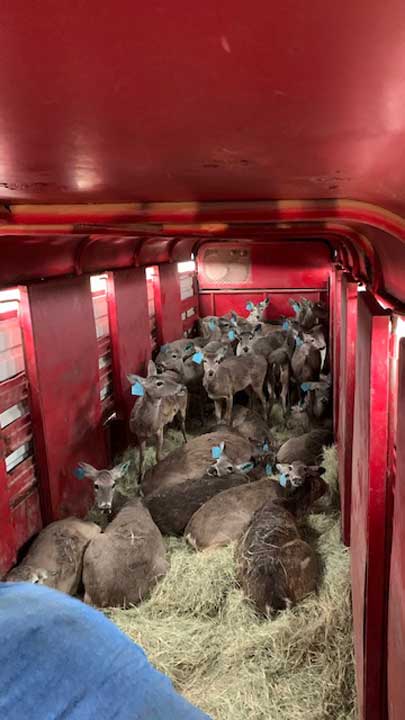 Using TTT or trapping, transport and translocation of deer from over-populated areas to those where the deer have been wiped out by anthrax, hunter conservationists led by wildlife biologist Macy Ledbetter hope to repopulate barren areas. The program is financed by private landowners and hunting groups.

What are landowners and hunters doing? Ledbetter has been leading efforts to restock areas most affected by anthrax. The Texas Parks and Wildlife Department, through its TTT program—or the trapping, transport and translocation of deer from over-populated areas to those that have few if any deer. Through this program, financed by private landowners and hunting groups, Ledbetter and those he works with are moving 425 whitetail deer into the center of the previously anthrax-affected area. Each deer will be vaccinated, by needle, for anthrax. This will ensure protection from anthrax for one year and, thereby, allow at least one fawn crop. Deer will go to low-fenced properties and will be ear-tagged with a color-coded tag to denote specific release sites. These tags state, “If found, please contact [email protected].” This tagging program will provide much biological data regarding the released deer and hopefully re-establish whitetail deer herds. It is likely this trap-and-transplant program will be an annual effort for the next several years.

Some of the trapped and released deer are coming from urban areas where normally those “surplus” deer would be killed. Others are coming from some of the best managed ranches in the South Texas Brush Country, properties managed by Ledbetter that produce big bodies and big antlers.

About the Author
Legendary “Mr. Whitetail,” Larry Weishuhn, host and owner of DSC’s “Trailing the Hunter’s Moon,” is one of the most popular and widely-recognized wildlife biologists and outdoor media personalities nationwide. Over the past five decades, he has authored multiple books and numerous articles on hunting and wildlife conservation. In 2004 his book, Trailing the Hunter’s Moon, was named ForeWord Magazine’s Gold Book of the Year in the Adventure and Recreation category.