“There can be no greater issue than that of conservation in this country.”—26th U.S. President Theodore Roosevelt—the “conservationist president” (1858-1919)

In August 2000, the Boone and Crockett Club (B&C) organized a landmark conservation summit at its headquarters in Missoula, Mont., that would have a profound effect on their future. Drawing representatives from organizations including the NRA, the meeting spurred the creation of the American Wildlife Conservation Partners (AWCP)—a coalition that today spans more than 50 member groups representing the interests of America’s millions of hunter-conservationists, professional wildlife and natural resource managers, outdoor recreationists, conservation educators and wildlife scientists. While like-minded individual member organizations from the Rocky Mountain Elk Foundation, Congressional Sportsmen’s Foundation and Ruffed Grouse Society to the Dallas Safari Club, Safari Club International and Texas Wildlife Association have their own areas of interest, the AWCP is a conservation powerhouse united in protecting the future of our renewable wildlife resources. I know this firsthand as I am one of three NRA staffers who represent the NRA with the AWCP and attended its 20th anniversary meeting, which fittingly returned to Missoula, Mont., Aug. 2-4.

While I was there to represent the NRA and monitor the issues for NRA Publications, as a lifelong hunter I appreciated other groups’ presentations. Timely topics included chronic wasting disease (CWD), the 2023 Farm Bill, the Migratory Bird Treaty Act, the expansion of wildlife crossings and migration corridors, and efforts to build more public shooting ranges as recreational shooting on federal lands was folded into the AWCP issue base in recent years.

Included was an update on the HuntFish 30X30 sportsmen’s coalition that emerged following the 30X30 global initiative over the past year to protect biodiversity and address climate change by protecting 30 percent of the planet’s lands and waters by the year 2030. Considering the uncertainty 30X30 policies may pose for hunting and fishing access, the coalition is ensuring hunters and anglers have a seat at the decision-making table.

It is important for hunters unfamiliar with the AWCP to know it remains out front in supporting the sustainable public use and enjoyment of our wildlife resources. It operates under the parameters of the science-based management that fuels our state and federal fish and wildlife agencies in cooperation with land and habitat managers of our federal, state and local governments. As U.S. President Theodore Roosevelt once said, “Nobody cares how much you know—until they know how much you care.” The AWCP cares, and it addresses the issues thoughtfully, having the backs of wildlife and hunter-conservationists alike.

The AWCP is effective because it maintains a governance structure that facilitates sign-on letters, agreement of the partners on wildlife conservation issues, and collaboration with the current administration and Congress. Following are a few more specifics.

Sample Advocacy and Organizing Efforts
AWCP sign-on letters alone aid our natural wildlife resources. Such letters express the importance of a given policy or measure while conveying the unique perspective of AWCP sign-on groups, each of which wields its own impressive knowledge on the issues and carries weight with policymakers, public opinion leaders and the media. One of the most recent AWCP sign-on letters was sent to Senate Majority Leader Chuck Shumer (D-N.Y.) and Senate Minority Leader Mitch McConnell (R-Ky.) in June, urging the Senate to reject the Biden administration’s nomination of professional gun control activist David Chipman to head the Bureau of Alcohol, Tobacco, Firearms and Explosives (ATF), the agency that enforces the nation’s gun laws, as the move would jeopardize the ATF mission. (To read the letter, click here.) 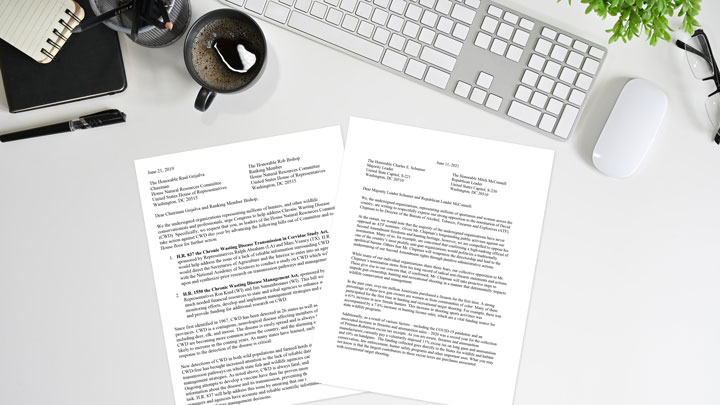 Other recent sign-on letters include opposition to bans on legally hunted wildlife imports from African countries, whether into the United States or European nations. AWCP sign-on letters explain that such bans ultimately harm wildlife and habitat conservation while damaging the livelihoods of local communities, the original and most important conservators of African wildlife. Other letters include support for expanding wildlife migration corridors and the push to encourage Congress to help address CWD, urging House Natural Resources Committee leaders to advance certain bills out of Committee and to the House floor for further action. Not all letters are signed by every non-governmental organization belonging to the AWCP as each must remain true to its individual mission and avoid having to take a position on an issue because of its AWCP membership.

The 10 recommendations addressed in Volume VI for the Biden administration and the next two Congresses include: 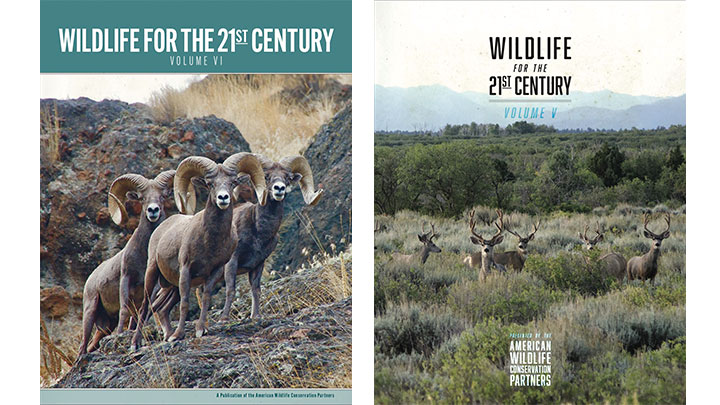 As with previous volumes, Volume VI aims to enhance federal agencies’ stewardship of our fish, wildlife and habitats and increase access to federal lands and waters for outdoor recreation. Material represents a general agreement of AWCP partners, though each partner organization reserves the right to establish independent positions on issues over the next four years. As a lifelong hunter and Life member of the Mule Deer Foundation and several other AWCP organizations, I provided the mule deer cover photo for Volume V that was sent to the Trump administration. We hunters are drawn to the field and tend to have a few wildlife pics on hand.

Highlighting the Impact of Sportsmen’s Dollars
The AWCP is immersed in supporting wildlife as well as sportsmen’s interests for good reason. For nearly a century, hunters, shooters and anglers have been the linchpins in upholding the American system of conservation funding now known as the North American Model of Wildlife Conservation, adopted by the NRA Board of Directors as official NRA policy in 2014.

For some financial facts, the AWCP website cites that last year alone, sportsmen and women paid their fair share to the tune of nearly $3 billion. The impressive breakdown is as follows:

Underscoring the Conservation Legacy of Theodore Roosevelt
Getting back to how appropriate it was that the 20th anniversary AWCP gathering returned to its Missoula roots following a virtual event in 2020 due to the pandemic, the dinner too was appropriately hosted by the B&C at its headquarters. As the oldest wildlife conservation group in America, B&C was not only a founding member of AWCP, but for any hunter who is unaware, it was founded by Theodore Roosevelt in 1887 as he worked to establish a coalition of dedicated wildlife conservationists. Roosevelt was the group’s first president and an active club member until his death in 1919. While serving as club president—and, of course, later as president of the United States—he ensured numerous laws protecting our wildlife resources and their habitats were passed. As the B&C website shares, the creation of the U.S. Forest Service, the National Wildlife Refuge System and the National Park Service are just some of his remarkable achievements that paved the way to well over 220 million acres for the benefit of wildlife and the American people.

In working alongside fellow AWCP members, I appreciated the fact that the only thing that diverted dinner meeting hosts such as B&C President Jim Arnold and CEO Tony Schoonen, from talking with me about AWCP issues was sharing stories of our hunts. Maybe talking about hunting was the most fitting topic of all. Celebrating hunters and hunting is part of why AWCP member organizations are so passionate about protecting legal, regulated hunting’s future and promoting its cultural acceptance in the first place. Hunting and fishing are critical wildlife management and conservation tools, but they also are cherished traditions that enhance our quality of life and must be passed to the next generation.

I was in the right place at the right time to appreciate the synergy propelling the AWCP into the future. I left the conference pondering even more words from America’s “conservationist president.” It was Roosevelt who said, “Do what you can, with what you have, where you are.” Those words are reflected in the work of the AWCP every day. Two decades later, the AWCP continues to follow Roosevelt’s lead. 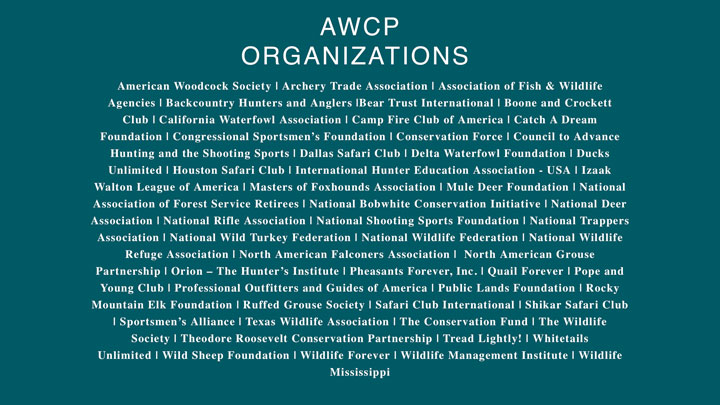 About the Author: An NRA Endowment member and member of multiple AWCP organizations, Karen Mehall Phillips is the director of communications for the NRA Hunters’ Leadership Forum and senior editor of American Hunter. She has hunted across America and on four continents, promoting the benefits of legal, regulated hunting to wildlife and local communities and fighting animal rights extremists' culture war on hunters. Karen worked in the NRA public relations arena before joining NRA Publications in 1998. She is the founding editor of two NRA official journals, America's 1st Freedom and Woman's Outlook, and a founding member of the Professional Outdoor Media Association. National writing awards include being named the 2015 Carl Zeiss Sports Optics Writer of the Year.