When assembling his paintings of Teddy Roosevelt for the coffee-table art book “The Legendary Hunts of Theodore Roosevelt,” author and world-renowned wildlife artist John Seerey-Lester included one of the bespeckled, pith-helmet-wearing adventurer seated inside a tent while on his 1909 African safari. Our eyes are drawn to the light the former president is facing as he reads or writes with his back to the tent flap. At the opening, however, is a maned lion, eyes staring menacingly at the back of the former president. You can’t help but squirm, heart beating a little faster. The juxtaposition of the seemingly safe and cozy lighting with death lurking at the door is storytelling that everyone can relate to, most especially the hunter and outdoorsman. 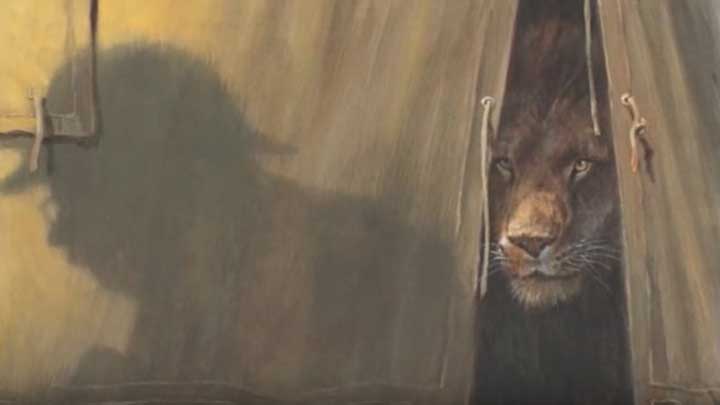 Listen to Tweed Roosevelt, Teddy Roosevelt's great-grandson and Theodore Roosevelt Association president, interview John Seerey-Lester about his work depicting the adventurous former president on canvas by clicking on the image. (Courtesy of www.Seerey-Lester.com.)

A similar painting is currently viewable in the banner position of Seerey-Lester’s Facebook page. Only this time, the shadow of the figure inside the tent is hunched and looking straight at the lion staring back at him with cold yellow eyes. What is that we’re sensing in this scene? A facing of one’s own mortality? A recognition and acceptance of life’s inevitabilities? An expectation? A waiting? The emotion evoked is just as powerful as the danger-filled stalking in the Roosevelt painting but for different reasons. Both are equally chilling. 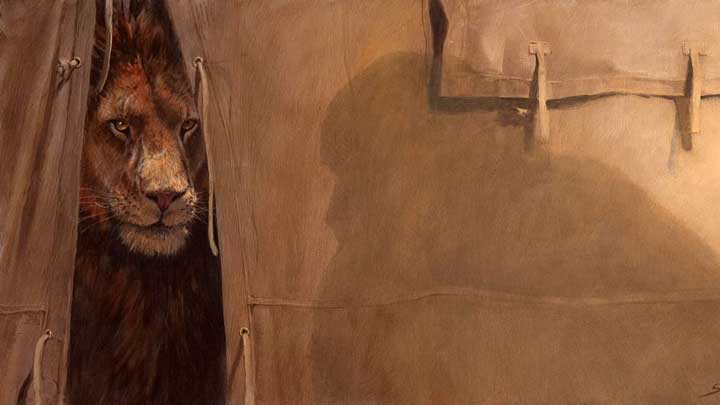 "Deadly Shadows" brings the viewer up short. Unlike the thrilling adventure of many John Seerey-Lester predicament paintings, this one seems to suggest a more internal facing of one's own fears. (Courtesy of www.Seerey-Lester.com.)

And that is just one example of why Seerey-Lester’s enduring contribution to hunting and wildlife conservation is again being recognized. Although the National Rifle Association (NRA) Annual Meeting and Exhibits was canceled due to the coronavirus pandemic, the NRA Hunters’ Leadership Forum (HLF) still presented its NRA Distinguished Hunters Leadership Award for 2020, and it should come as no surprise that the venerable Seerey-Lester was selected to receive the honor.

“While current circumstances precluded the ability to present John with our HLF award in person, it is important that we recognize his many contributions to the NRA and HLF today,” said NRA HLF Co-Chair Ward “Trig” French. “His work inspires and informs all hunters whether new to outdoor pursuits or a seasoned hunter. John's many extraordinary books and paintings have well chronicled for future generations the value of hunting and its inextricable link to conservation in our country and throughout the world. It is an honor to call John a dear friend and to know his significant contributions to our outdoor pastimes are being recognized by the Hunter's Leadership Forum.” 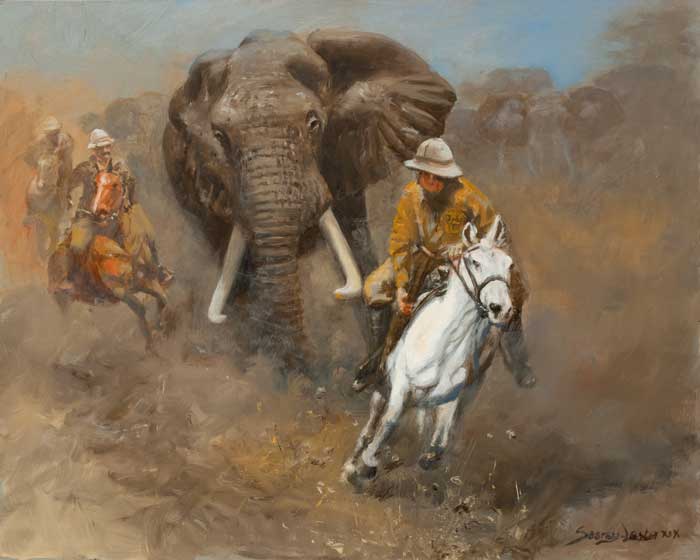 John Seerey-Lester's "Charge of the Elephant" is one of the many exciting paintings that accompanies a Teddy Roosevelt adventure story in the art book "The Legendary Hunts of Theodore Roosevelt," with a foreword by Tweed Roosevelt. (Courtesy of www.Seerey-Lester.com.)

The award recognizes distinguished NRA members who demonstrate exceptional leadership in the field of hunting and wildlife conservation. Through his magnanimous generosity, Seerey-Lester has donated hundreds of thousands of dollars to promote hunting’s rich contributions to our shared heritage and to the conservation of wildlife and associated habitats. The NRA’s mission to “promote hunter safety, and to promote and defend hunting as a shooting sport and as a viable and necessary method of fostering the propagation, growth and conservation, and wise use of our renewable resources” is at the core of Seerey-Lester’s work, most notably in his Teddy Roosevelt series celebrating the grandfather of our North American Model of Wildlife Conservation.

Seerey-Lester is more than a wildlife painter, though he is considered one of the world’s best at what he does. The former journalist and magazine editor is a vivid storyteller, bringing the wild into your home through his exciting stories, taking you along on the many adventures he and others have enjoyed in far-flung parts of the world. He refuses to paint anything he has not seen for himself in the wild. He’s even experienced the terror of what’s known as the “predicament” genre of paintings he creates. Once, while observing a grizzly, the sow charged him. By the time he ran 30 yards to his camper, the grizzly had covered a mile and a half, running on the other side of the RV from Seerey-Lester. He knows firsthand, the terror he teases in his artwork.

Charged By A Grizzly
John Seerey-Lester recounts his own close call in the wild, along with how one of his paintings hangs in the White House.

He doesn’t trust photographs, favoring his sketchbooks, which he fills with all aspects of his observations: the animal in motion, in stillness, in its habitat, at daybreak and sunset. He never sells his sketches, but references them over and over when putting oil or acrylic to canvas. He also considers them a good way to practice drawing and encourages his students to take up the practice.

His historical pieces, like those of Roosevelt, are meticulously researched with the help of people like the president’s great-grandson, Tweed Roosevelt, who is president of the board of trustees of the Theodore Roosevelt Association. Seerey-Lester hunts down period firearms or purchases reliable replicas and has period costuming available to don on live models who resemble his subjects. Last October, when friend and fellow artist Matthew Hillier presented Seerey-Lester with the Society of Animal Artists Lifetime Achievement Award at the organization’s 59th Annual Exhibition Awards ceremony, he joked that all of Seerey-Lester’s friends are immortalized in his paintings…before they’re mauled by bears, eaten by lions or attacked by wolves. Hillier’s introduction reiterated what a gregarious and fun-loving man Seerey-Lester is, a good friend with an endearing sense of humor. 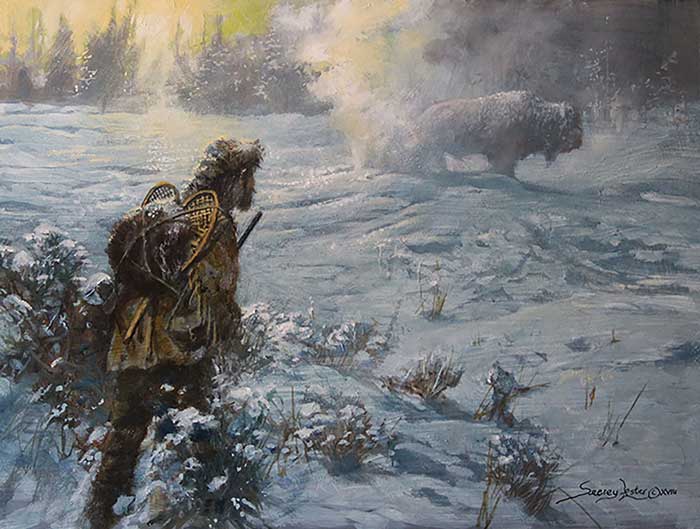 By telling the stories of real-life hunters and trappers, John Seerey-Lester has amassed a library for future outdoorsmen and hunters to absorb. You can read about "Colter's Hell" by clicking on the picture. (Courtesy of www.Seerey-Lester.com.)

In addition to being a member of the NRA and the International Order of St. Hubertus, Seerey-Lester is also affiliated with Artists for Conservation (AFC), Oil Painters of America, Birds in Art and CampFire Club of America. He is a founding member of Southern Plein Air Artists. He is the recipient of a long list of awards. Most notably, the NRA recognized Seerey-Lester’s dedication to the Second Amendment and to hunting with the prestigious Ring of Freedom Award in 2012. He also received a Commendation by His Royal Highness Prince Phillip for work in conservation and was knighted by His Imperial and Royal Highness Archduke Andreas of Austria.

He received the AFC Conservation Artist Award in 2014, the Sporting Classics Artist of the Year in 2012 and the Silver Medal for Historical Content in 2009 for his work in another book of his hunting artwork and engrossing real-life adventure stories, “Legends of the Hunt.” If you are ever lucky enough to own this book, or any of Seerey-Lester’s books, you will covet it as a family heirloom. If not, you can get a taste of some of the artwork and accompanying stories that appear in “Legends of the Hunt” and “Legends of the Hunt Campfire Tales” by visiting Sporting Classics Daily. Just be sure there’s nothing pending on your to-do list, because you’ll be unable to resist reading one, then the next and another. 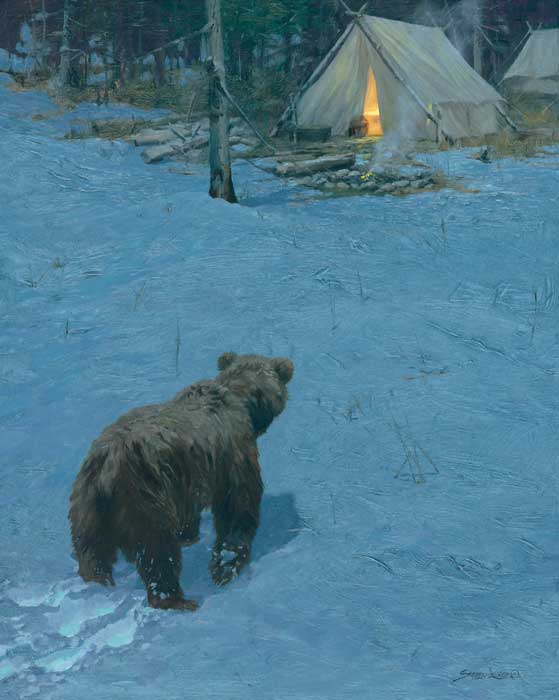 Like many of John Seerey-Lester's paintings, "Dark Inquisitor" can be appreciated by people from all walks of life. The lion, bear or wolf just outside the seemingly safe and cozy abode can be a metaphor for financial trouble, illness or even your own stresses and worries about the future. And for the outdoorsman who has experienced such encounters, the primal sensations depicted on the canvas are visceral. (Courtesy of www.Seerey-Lester.com.)

Once you know of Seerey-Lester’s artistry, you become more enthralled with his story. He was born in England at the close of World War II. He had scant opportunity as a boy to hunt but did hire on as a beater, flushing birds from the bush for what amounted to pennies so that others could hunt. During his work as a reporter, editor and government press officer, he garnered wide popularity for his paintings of Victorian- and Edwardian-era street scenes. It was on a trip to Africa in the 1970s when Seerey-Lester’s passion was ignited for painting predators and prey, including man’s interaction with both. Since then, he has traveled widely to observe wildlife in its natural habitat firsthand. When he emigrated from Manchester, England, to Florida in 1980, he was astounded with the abundance of wildlife and the wealth of outdoor opportunities for kids to handle firearms safely and to hunt. He became a proud supporter of the NRA and Second Amendment rights, in addition to wildlife conservation. In his interview with Bob Bahr for the NRA Ring of Freedom article, he bemoaned the lack of anything even remotely similar to the NRA in his native England. He cherished our Second Amendment rights so deeply that eventually, he became a proud U.S. citizen.

The Seerey-Lester website is packed with information on the artist and his wife, Suzie, who is herself a recognized wildlife painter and conservationist. She also was a dive instructor for CIA and Secret Service Agents, U.S. Marshals and FBI and other law-enforcement personnel. Together, the couple has traveled the globe, viewing their wildlife subjects in person. Master-level classes given by Seerey-Lester are available for purchase through the site, as well as links to prints and books for sale. Once you find yourself drawn into one of his paintings, you will understand, as Seerey-Lester does and Teddy Roosevelt did, that wildlife and its habitat survive because of hunters. 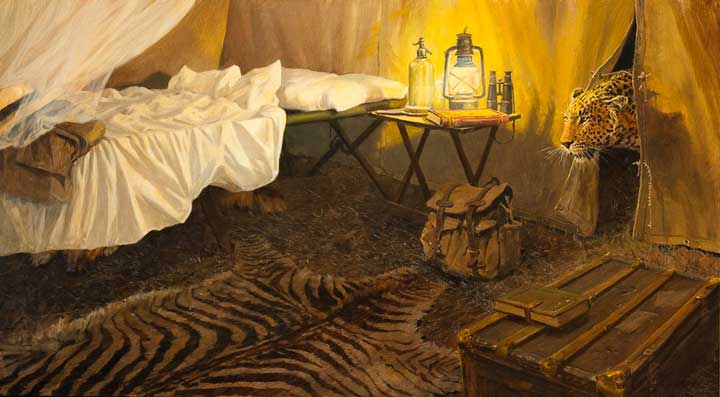 "Breached"--Sometimes it takes a moment, but it's always there: the surprise, the danger, the excitement of what will happen next. Man is not the only character in his adventures; his best friend is often deep in the thick of it. (Courtesy of www.Seerey-Lester.com.)