It is with great sadness that the NRA Hunters’ Leadership Forum (HLF) announces the passing of renown wildlife artist, conservationist, historian, and Second Amendment and NRA patriot John Seerey-Lester. Seerey-Lester passed away from cancer on May 19 with his beloved wife, Suzie, by his side at their home in Osprey, Fla. Among the numerous international honors bestowed on our dear friend, most recently he was recognized in April as the recipient of the NRA HLF’s 2020 NRA Distinguished Hunters Leadership Award. Details on a memorial to celebrate Seerey-Lester’s life will be shared as soon as they become available. 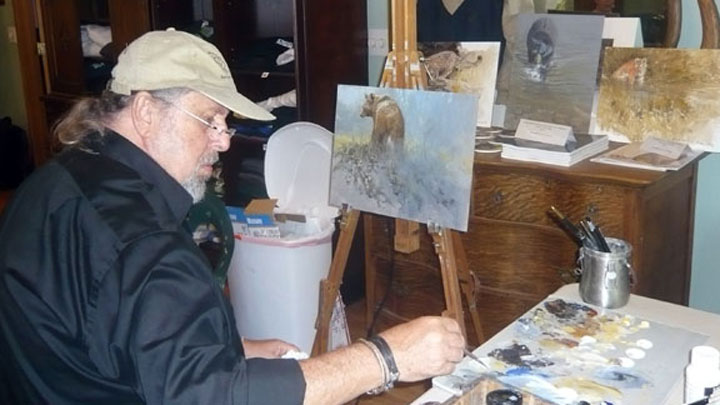 “John Seerey-Lester was an extremely talented artist and author dedicated to the protection of our Second Amendment and our great hunting heritage,” said NRA EVP and CEO Wayne LaPierre. ”He used the power of his paintbrush to stir souls, whisper into hearts and make God’s beautiful creations come alive on canvas in profound ways.  His contributions to the National Rifle Association were numerous and priceless. We know that John's indelible legacy of protecting freedom and his love for conservation will inspire future generations toward the same noble and worthy causes he championed in his lifetime.”

Seerey-Lester was one of the most renown wildlife and historic artists of our time with work on display at the White House and in permanent, private and museum collections world-wide. Preferring to paint from firsthand life experience, through the years he traveled to Africa, the Arctic, Antarctica, China, India, and Central and South America. Published by Mill Pond Press, he had well over 400 different limited-edition prints in circulation. 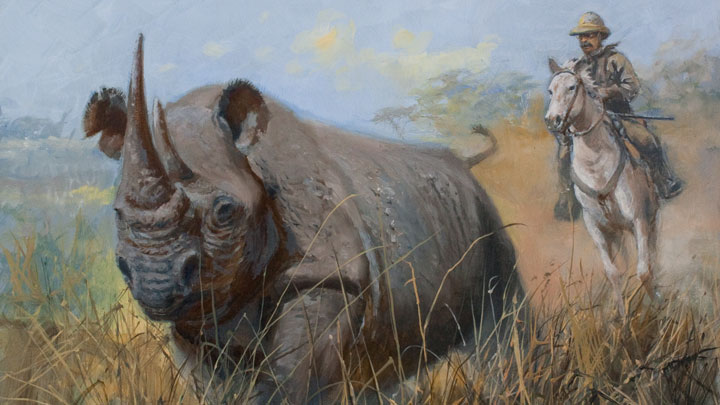 While Seerey-Lester traveled the world painting, photographing and researching nature, he began his early career in his native England as a journalist, magazine editor and government press officer. He quickly became known for his nostalgic paintings set during the Victorian and Edwardian eras. After a visit to East Africa sparked an interest in depicting wildlife, he began combining his appreciation of history with wildlife themes. This ultimately led to his desire to capture in paint the golden age of the hunter in the late 1800s and early 1900s and North America’s celebrated hunting and wildlife conservation heritage. 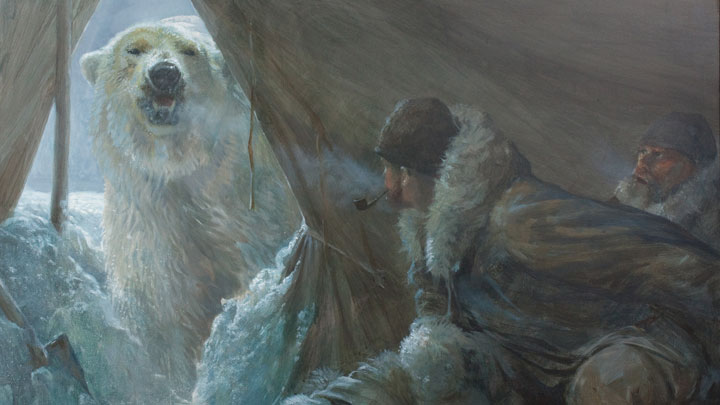 Seerey-Lester moved to the United States in 1980. Remarkably, he so appreciated American freedom that he would one day become a U.S. citizen. Recognizing how Americans were blessed for having an NRA and a Second Amendment, he was drawn to the heritage of firearms ownership that presented a stark contrast with his life in England. Impressed with America’s wilderness areas, he was happy to see how Americans were free to hunt and that hunting was not merely reserved for the rich.

When it comes to the saying among artists that you should paint what you know, Seerey-Lester always said that he knew hair-raising predicaments. In observing and/or researching the elements in his paintings, he created countless formidable run-ins with predators from grizzly bears to African lions, art he called “predicament paintings.” Whether the threatening situation involved an unexpected encounter with a grizzly bear or African elephants on the verge of a stampede, the stories in his paintings had fans wondering how scenes would play out, welcoming them to put their own ending to the story. Many other sought-after paintings included scenes depicting U.S. President Theodore Roosevelt in various outdoor settings and images from the hunts of many safari legends. In fact, Roosevelt's great-grandson Tweed has always referred to him as "the preeminent modern day painter of Theodore Roosevelt." 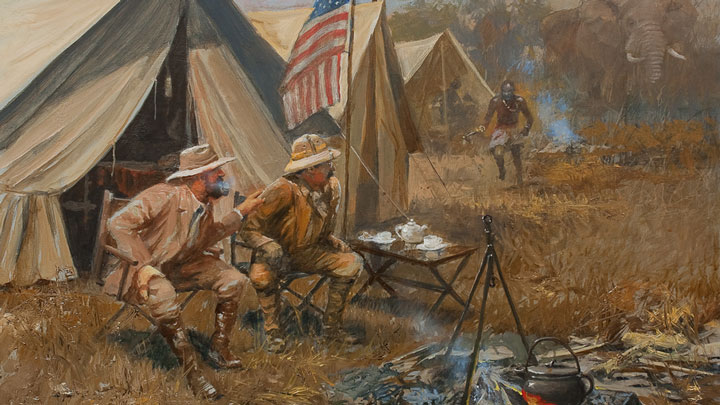 Seerey-Lester’s many awards for outstanding achievement in the wildlife and sporting art arena include the NRA Ring of Freedom Award and the invitation to become a member of the International Order of St. Hubertus. He also was presented to His Royal Highness Prince Phillip, who commended him for his work in wildlife conservation, and knighted by his Imperial and Royal Highness Archduke Andreas of Austria in 2013, which earned him the title of Sir John Seerey-Lester. He and Suzie received the Sime Combes Award for Conservation in 2014 from Artists for Conservation, and in 2019 the Society of Animal Artists presented him with its Lifetime Achievement Award.

Kind-hearted and unselfish with both his time and knowledge, he has been the master or featured artist at nearly every major wildlife art show in the United States and the U.K. over the past four decades. He and Suzie, an award-winning wildlife artist in her own right, have taught wilderness wildlife workshops together for more than 20 years, mentoring aspiring artists while helping professionals in the field to improve in their craft. 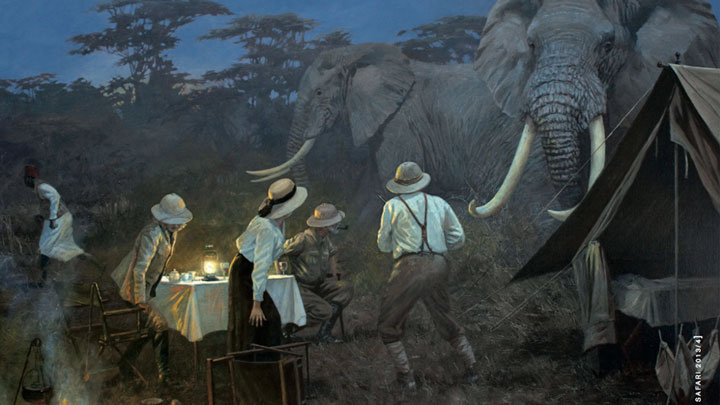 Seerey-Lester served on the board of The Roger Tory Peterson Institute and the Board of Artists for Conservation. He and his work were featured in numerous publications including NRA’s American Rifleman and Ring of Freedom, Sporting Classics, Sports Afield, Dallas Safari Club’s Game Trails, African Hunter, Wildlife Art, Western and American Art Collectors, Sarasota magazine and Informart, to name a few. He was a member of The Society of Animal Artists, Artists for Conservation, Oil Painters of America and a founding member of Southern Plein Air Artists.

In 1991, Seerey-Lester released a sold-out book on his life and work titled “Face to Face with Nature: The Art of John Seerey-Lester.” Numerous award-winning books containing his paintings paired with the stories behind them followed.

“John chose to ultimately become an American citizen, in part, to make sure that we do not forfeit our individual freedoms like he witnessed in his motherland. The right to own, collect, and use a firearm on lands rich in game and accessible for future generations to hunt are most laudable and are just some of the many fruits of John’s labor that he fought so passionately to protect.”
—Ward "Trig" French, NRA HLF Co-Chair

Through his artwork, Seerey-Lester personally raised millions of dollars to help save American and African wildlife and their habitats and to support the NRA, the Second Amendment and hunter-backed wildlife conservation groups. Known for his generous gifts to numerous organizations, including priceless original paintings donated to the NRA Institute for Legislative Action for auction, he was a proud member of the NRA and the NRA Hunters’ Leadership Forum and groups including the Boone and Crockett Club, Campfire Club of America, Artists for Conservation, St. Hubertus and Society of Animal Artists. 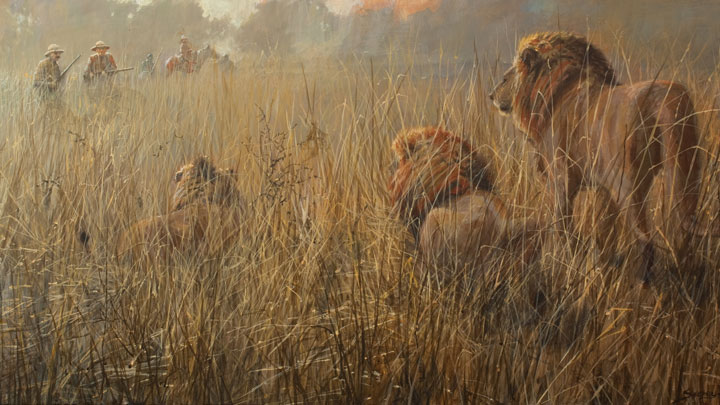 In the words of NRA HLF Co-Chair Ward “Trig” French, close friend of the Seerey-Lesters, “John was an icon in the arena of conservation and the preservation of our Second Amendment rights. Through his illustrative stories and art, he nobly mentored so many of us in the causes closest to his heart. There was a sinuous connection running from what John observed in the field, the history he researched extensively and the tip of his brush that graced the canvas.” 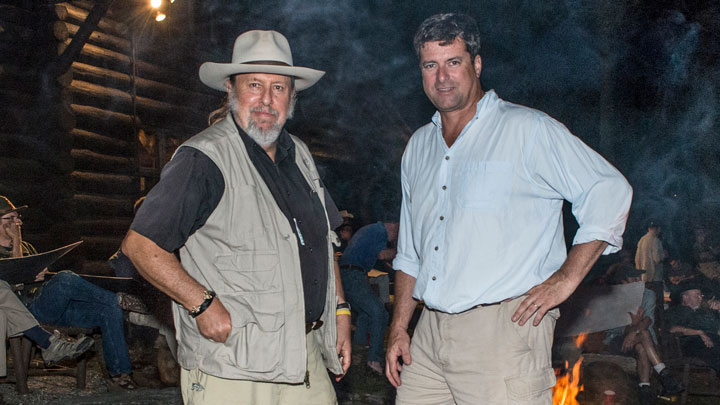 French shared his admiration for Seerey-Lester’s strength of character, passion and dedication to the causes he believed in, and for the devotion and humility he showed to his friends and loved ones. “To know John was to know a truly selfless soul,” said French. “Through his writing and art, John has exposed for future generations his love of nature and its inhabitants, the value of protecting our individual freedoms, and a passion and flame for myself and others to carry forward. What a legacy, my friend.” 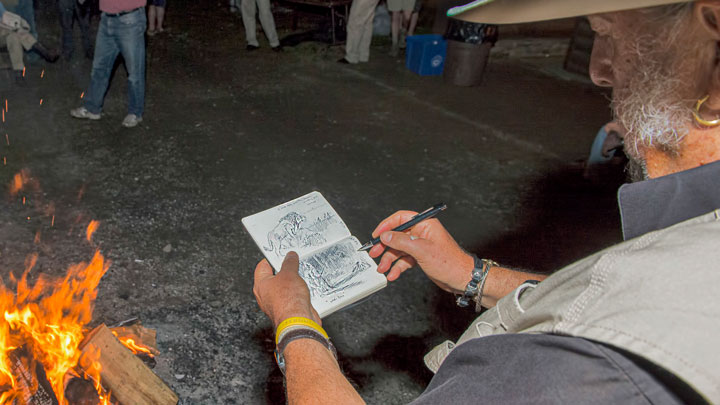 As witnessed on regular occasions, French explained how through example and explanation, Seerey-Lester brought so many into the fold to fight for the causes that were at the very core of the freedoms he held dear as an American. “It is perhaps odd that an Englishman would champion the cause of the Second Amendment and wildlife conservation in America,” noted French. “John chose to ultimately become an American citizen, in part, to make sure that we do not forfeit our individual freedoms like he witnessed in his motherland. The right to own, collect, and use a firearm on lands rich in game and accessible for future generations to hunt are most laudable and are just some of the many fruits of John’s labor that he fought so passionately to protect.”

French talked of how Seerey-Lester always said you cannot appreciate what you’ve lost until it’s gone. “Why causes matter and values must persist can only be taught through example—and what a fine one John Seerey-Lester was to the hunting and shooting community,” concluded French. “John was authentic to the core, and life unvarnished in nature was beautiful and the spirit of the hunt meaningful.”

Those closest to Seerey-Lester are confident that his legacy will carry on through his devoted wife, Suzie, who shared in so many of his causes. Seerey-Lester’s ashes will be spread at Yellowstone National Park, a special and fitting place that brought such peace and inspiration to the artist through the years. 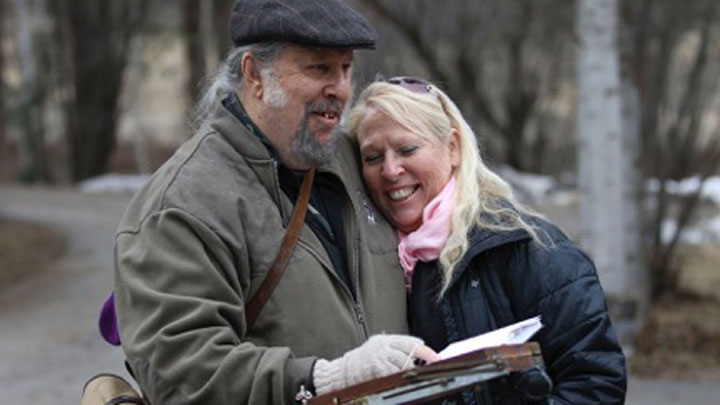 As we say goodbye to the remarkable Sir John Seerey-Lester, we are humbled in having known this gentle giant. We are blessed in having watched this proud American make his mark, standing for freedom and exhibiting a strength of spirit as he captured our imaginations and pushed himself to greatness. He lives on in our hearts and his kindness and his achievements will be celebrated for generations to come. We are richer for having had him in our midst and we forever embrace his legacy.

Author’s Note
I met John Seerey-Lester at an SCI show years ago. I was in awe as I approached his booth, watching him do a “live” painting in between talking with hunters like me who were excited to watch him create. His model, dressed in safari garb and a pith helmet, sat motionless for what I soon learned would be the latest in a series of oil paintings depicting U.S. President Theodore Roosevelt on safari in the African bush. Seerey-Lester was pleased to know I was with the NRA. As he shared his powerful story of why he became a U.S. citizen and an NRA member, I silently wished every American gun owner recognized that the NRA is the reason we even have Second Amendment and hunting freedoms and that such freedom must never be taken for granted. Not long after our meeting, I became the proud owner of Seerey-Lester’s book “Legends of the Hunt.” As my prized “coffee table” book, it spans 200 pages featuring more than 100 glossy photos of engaging, period-correct, often spine-tingling paintings of hunters and the hunted. No wonder John Seerey-Lester is referred to as “the godfather of wildlife art” and “the master hunting scene painter of our generation.” As I recall him sitting in that booth, I am saddened over such a loss, but I also know the hunting and wildlife conservation world was blessed to have had him at all.