The Colorado Wildlife Commission (CWC) shared good news following its virtual meeting on Apr. 30. Beginning July 1, it announced that non-hunters and non-anglers ages 18 and older will be required to buy a Colorado hunting or fishing license to access state wildlife areas. Just as those who use Colorado’s 42 state parks pay an entrance fee, outdoor recreationalists visiting state wildlife areas will join hunters and anglers in paying their share.

Most of us who hunt and fish in Colorado know that a portion of the money we spend on hunting and fishing licenses and gear goes to Colorado Parks and Wildlife (CPW) to buy and maintain state wildlife areas. But as my local newspaper, the Montrose Press, noted, these days we’re seeing increases in the use of these areas by non-traditional sportsmen—campers, birdwatchers, backpackers, hikers, paddleboarders, mountain bikers, nature photographers and dog walkers—who often leave behind evidence of their presence. The idea behind state wildlife areas in the first place was to benefit the fish and wildlife that live there and give hunters and anglers more opportunities to hunt and fish. In many cases, other outdoor enthusiasts now outnumber sportsmen on any given day while also using these areas year-round, often displacing wildlife. 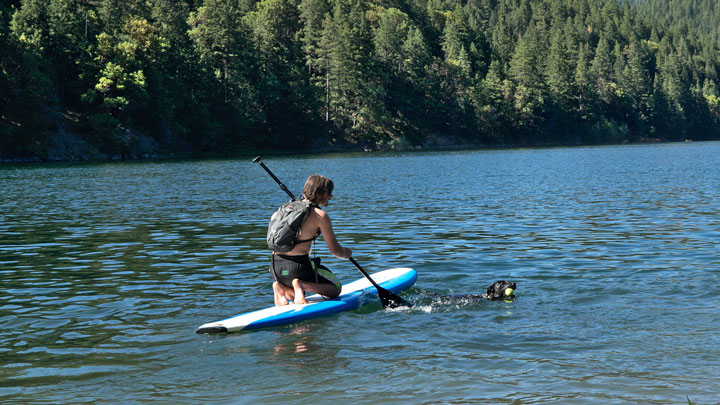 A recent NRAHLF.org news article noted that given such widespread lack of awareness of wildlife’s senses of smell, vision and hearing, non-consumptive users likely cause more harm than they know. Regardless of the type of recreation, author Pat Durkin documented how these activities can disrupt wildlife activity, which is especially concerning when birds and animals are already hungry, worn down or tending young.

“For years, we’ve been seeing more and more use and abuse of our state wildlife areas by non-wildlife users,” explained CPW’s Montrose Area Wildlife Manager Renzo DelPiccolo, whose agency-wide team began considering the issue in January. “These wildlife areas are purchased to protect wildlife habitat and for hunting and angling. We’ve been allowing those other uses but have come to the realization that it’s really degrading and negatively impacting the value that they were purchased for. They were purchased with sportsmen’s dollars—hunting and fishing license fees.”

With this new rule kicking in July 1, I’m hopeful that maybe some of the hikers and dog walkers will choose to use other areas. If they don’t, at least they will be paying to help maintain our state wildlife areas. As the newspaper article explained, photos shared during the CWC meeting showed that the non-hunting users were leaving trash in their campsites and scattered around the wildlife areas. We hunters, on the other hand, appreciate the opportunity to access these lands and generally go out of our way to try and leave them better than we found them. As for those who continue to throw their trash on the ground, at least their money will go to pay to pick it up.

It’s worth repeating that Colorado’s more than 300 state wildlife areas were purchased with funds from the sales of hunting and fishing licenses to provide habitat for wildlife and wildlife-related uses. Hunters and anglers don’t think twice about our “user pays” system and willingly do our part. So shouldn’t everyone who uses a Colorado wildlife area help hunters and anglers to maintain them?

Public education instead of enforcement action is expected to be the norm for the first year. The new rule also will replace the day-use access permits currently in place on four state wildlife areas.

Friends at the CPW’s Montrose office regularly explain that the CPW doesn’t receive state general fund dollars. Its funding mainly comes from the sales of hunting and fishing licenses and the money it receives from federal excise taxes collected on hunting and fishing equipment, such as ammunition. It also receives grants from Great Outdoors Colorado, which uses a portion of Colorado Lottery proceeds to preserve, protect and enhance state wildlife, parks, rivers, trails and open spaces.

For more positive potential, maybe Colorado’s new rule going into effect July 1 will set off a “follow the leader” mentality in other states. All state wildlife agencies would benefit from increased funding sources. Imagine how much more state agencies could do for their renewable fish and wildlife resources if they weren’t so busy trying to find ways to do more with less.

How Sportsmen’s Dollars Also Provide Federal-Level Aid
For the record, America has relied on hunters for years to pay for wildlife conservation. Hunter funding is all thanks to the Federal Aid in Wildlife Restoration Act of 1937, or Pittman-Robertson (P-R) Act, that charges an excise tax on the sales of firearms and ammunition. (Its counterpart, the Federal Aid in Sport Fish Restoration Act of 1950, or Dingell-Johnson Act, added an excise tax on fishing equipment for fisheries restoration and conservation.) As the NRA Hunters’ Leadership Forum promotes, P-R revenue is then issued to all U.S. states and territories based on their land area and number of hunting licenses sold.

Be sure to tell the non-hunters and non-anglers you know that the wild turkeys or whitetail deer they like to photograph are just two examples of species brought back from the brink of extinction in the last hundred years because of sportsmen. We’re the ones who paid to reintroduce and repopulate these and many other native species and their habitats. And now they thrive.