With the Great American Outdoors Act (GAOA) signed into law by President Donald J. Trump on Aug. 4, the Trump administration’s Department of the Interior (DOI) is wasting no time taking action. Last week, Secretary of the Interior David Bernhardt signed Secretarial Order (SO) 3383 establishing the Great American Outdoors Act Coordination and Implementation Task Force. The very next day he addressed the American Wildlife Conservation Partners (AWCP)—a consortium of 52 of America’s like-minded, hunter-backed wildlife conservation organizations—during its virtual conference, Aug. 12-13, to say the DOI was already implementing its portion of the new law.

As this site previously reported, GAOA will provide $9.5 billion over the next five years to address the multi-billion-dollar deferred maintenance backlog at America’s national parks and on other federally managed public lands while also funding new public access projects nationwide. The act also permanently funds the Land and Water Conservation Fund, which allows federal land management agencies to acquire private land to protect it from development, some of which will benefit hunting and habitat.

As a National Rifle Association representative to the AWCP, I attended the virtual AWCP conference and witnessed yet again how the Trump administration and Secretary Bernhardt work to manage the country’s natural resources for the benefit and enjoyment of all.

Praising President Trump’s historic actions to pass GAOA, he shared, “I didn’t think for a minute this act would become law without the support of two people: President Trump and Senate leader Mitch McConnell. As for why it [GAOA] failed year after year, the mandatory spending concept was a significant hurdle and so was the concept of resources coming from energy revenue. Any president would have to stand up to members of his own caucus; his predecessors were not.”

Depending on the outcome of the November election, Bernhardt said, “We have 160 days—and three hours—to work together because we count every single minute in terms of productivity. … We have a great opportunity to align wildlife objectives of the states with our land management plans. With tremendous resources, we will facilitate working landscapes to create greater collaboration. We’re at a milestone in the challenges we face historically.”

Bernhardt recalled his first ever meeting with the AWCP four years earlier when the organization arranged to meet with both 2016 presidential campaigns to help inform the next administration about the pressing issues facing wildlife conservation and America’s sporting heritage in the 21st century. The goal was to share copies of “Wildlife for the 21st Century: Volume V,” for which I took the cover photo, as it did with previous volumes for previous U.S. presidents. 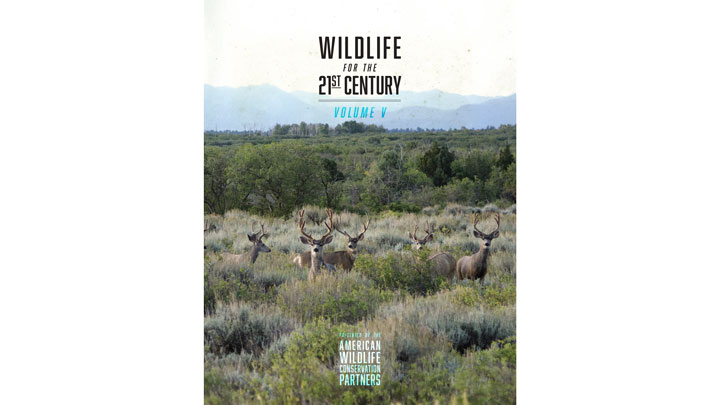 “I’ve carried Volume V with me every day,” said Bernhardt, noting previous SOI Zinke and he were quick to issue DOI secretarial orders to derive change quickly. Such action ensures the vitality of America’s wildlife resources and provides for their sustainable public use and enjoyment under the science-based management of the state and federal fish and wildlife agencies, in cooperation with federal, state and local governments. “My plan is to go back through Vol. 5,” he said, “and talk about the items raised to me in 2016 and give a progress report.”

Actions do speak louder than words. As this website has tracked, America’s hunters, shooters and anglers have much to be thankful for as the Trump administration and its DOI continue to invest in America’s future and expand outdoor opportunities for all Americans. It has an incredible track record of keeping its promises considering that as of this year, it will have increased access to public lands by more than 4 million acres.

More Background on S.O. 3383
In working with other Federal agencies and Tribes to implement GAOA, the task force will address the following key points:

About American Wildlife Conservation Partners
Celebrating its 20th anniversary, American Wildlife Conservation Partners (AWCP) was established in 2000 when the Boone and Crockett Club organized a wildlife conservation summit to address issues impacting wildlife conservation. With representatives of 35 like-minded organizations in attendance, the consortium of organizations today consists of 52 groups representing the interests of America’s millions of hunter-conservationists, professional wildlife and natural resource managers, outdoor recreation users, conservation educators and wildlife scientists. While each organization has its own primary areas of interest, the AWCP combines the energy and wisdom of its member organizations to work toward a future where all wildlife and private and public habitats are abundant, maintained and enhanced; hunting, trapping and other outdoor interests are supported by the public to maintain America’s great wildlife conservation heritage and cultural traditions; natural resources policies encourage, empower and reward stewardship and responsible use; and all citizens are committed to the principles of scientific wildlife management, where wildlife is held in the public trust and sustained for present and future generations.