Unless you’ve been under a rock for the last couple months, no matter what part of the country you live in, you’ve heard of the crisis along our Southern border. But what many don’t think about when it comes to illegal immigration is the affect it also has on area ranchers, outfitters and hunters. As a hunter who sells farm, ranch and recreational real estate for Hayden Outdoors in Texas and who gets regular reports from rancher friends near the border, I knew it was a matter of time before concern within the hunting industry also made headlines. On Apr. 9, the article “Migrant Activity Affects Ranchers, Hunters” hit the front page of the Lone Star News and national and local media have been sounding the point home ever since.

According to the article, as South and West Texas landowners face increasing property damage and safety threats, they are urging hunters to pack pistols. With one million illegals expected to cross from Mexico into the United States by summer, things will go from bad to worse under the current administration’s policies as everything in Texas along the border is private property.

The article notes that even this past fall, before the numbers of border-crossers ramped up to what they are today, it was not unusual to find illegals using hunting blinds for shelter and a place to hide. In fact, one rancher and outfitter in Maverick County, who asked not to be identified, said, “This hunting season was the worst I’ve seen. … Some people don’t feel safe to hunt—and they won’t book.”

And who could blame them? So now ranchers and outfitters get to add the negative economic impacts to personal property and safety concerns. And this was before President Biden shut down wall construction on his first day in office.

This same rancher shared that contrary to what is reported, few migrants are children. While many family units turn themselves in at the border, keeping U.S. Customs and Border Protection (CBP) officials overwhelmed, young males are sneaking across onto ranches, damaging property and possessions. Fence-fixing never ends. Not only are trespassers cutting fences to make it easier to walk through, but they are taking out sections of fencing by driving through them. As for the issue of COVID-19, many Americans continue to stay away from loved ones and cancel hunting trips while migrants who may have COVID are welcomed.

Yet mainstream media refuses to report this while some politicians play the blame game. Would they give illegals a pass if this were happening in their neighborhoods? But the scariest questions for the hunting community are: What happens the next time a hunter steps into his blind to find an armed and dangerous illegal immigrant? What happens when an outfitter along the border sees shadows moving silently past his camp, or he and the rancher he leases land from saddle up, ride over the ridge to repair a fence and run into armed cartel “drug mules?”

This week Fox News interviewed yet another Texas rancher concerned with personal safety, saying the illegal immigration crisis is the worst it has ever been. It also reported that Kinney County, near the busy Del Rio border crossing, just declared itself a local disaster, noting other counties may follow. As for what just this one county is up against, Kinney County Sheriff Brad Coe said criminal activity is up 305 percent over last year, something unprecedented over his 35 years of service.

“We are seeing a vast number of human smuggling and trafficking events,” Sheriff Coe explained. “Since yesterday, between 1 and 4 p.m., my deputies had four human smuggling events. I’ve got six deputies to cover 1,300 square miles so my deputies are working overtime. We can’t sustain this.”

As for why Texas hunters, other border-area visitors and residents must remain on alert, Coe said his county sustained $100,000 in fence damage over the past two weeks alone. He told ranchers to keep track of their costs in repairing fences, homes, sheds and crops and to tally the number of animals lost and the amount being spent to round them up. “Get me a bill so I have some leverage for when I go to Austin and when I go to Washington to open up people’s eyes to what’s going on down here,” he said. 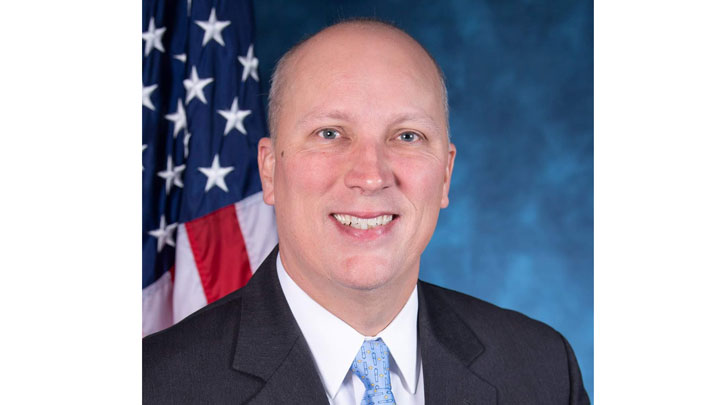 Speaking as someone who has a home in Texas, these reports are now a daily occurrence. On Tuesday, Fox News interviewed U.S. Rep. Chip Roy (pictured above), who represents Texas’ 21st Congressional District. He spoke of increasing concerns as his district covers six counties, including my county of Kendall and the town of Boerne outside San Antonio, and portions of four others. Roy also told Breitbart Texas of the dangers stemming from the Biden administration turning a “blind eye” as cartels take “operational control” of the southern border. You know things are getting worse when your local crime fighters, including Kendall County District Attorney Nicole Bishop, are interviewed on both local and national news.

It’s Not Just a Texas Problem.
Texas shares the longest U.S. border with Mexico at 1,241 of the 1,933 miles, but Arizona is second with 378 miles (followed by New Mexico then California). I hunt near the Mexico border in Arizona where hunters are increasingly urged to take precautions because of drug and human trafficking. This NRA website covered concerns as far back as 2016 when local law enforcement warned the drug cartel was infiltrating hunting areas. 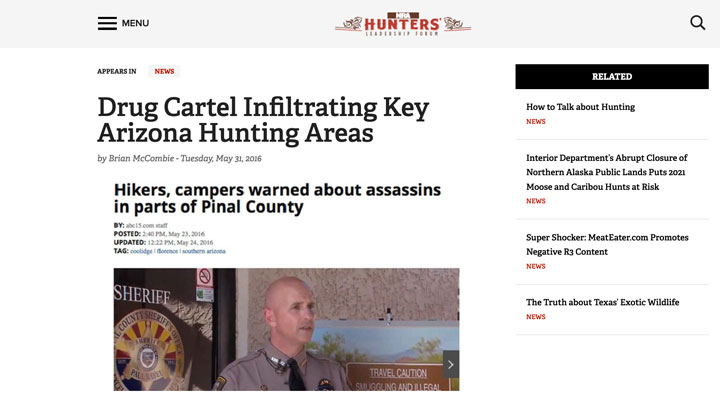 NRAHLF.org also reported on Arizona’s issues in 2020 when a hunting guide stumbled onto a corpse in Coronado National Forest linked to cartel activity. Hunters need to remain vigilant. 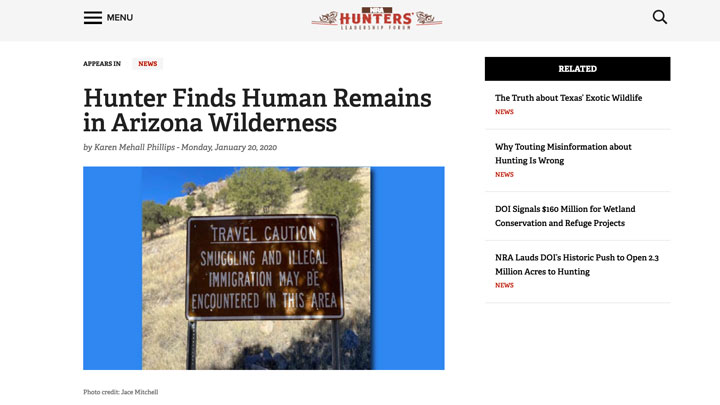 That guide, by the way, was my cousin. He can’t go on record as he works in undercover narcotics, but he was one of the people who escorted Fox News host and legal analyst Judge Jeanine Pirro last month during her tour of the border wall. In channeling migrants toward established entry points, he said Pirro saw firsthand how the wall at least gave CBP officials a chance to stop illegal immigrants and drug and human traffickers. Arizona Gov. Doug Ducey is now asking the Biden administration to act on what is a “federal” problem.

At least the outdoor media and some in the national media are offering glimpses into how border towns are taking the brunt of illegal immigration. Yet the Biden administration and mainstream media won’t even use the word “crisis.”

So if you’re planning to hunt or do anything outdoors near the border, please do your research and take safety precautions. As explained by one Homeland Security whistleblower just interviewed by the New York Post, keep in mind that current policies “were implemented irresponsibly” by people far removed from the situation and who have no sense of realism. Sadly, law-abiding Americans are paying the price.

About the Author
NRA Life member, award-winning outdoor TV host and recreational real estate associate broker Phil Phillips of Hayden Outdoors has hunted five continents, taking nearly 60 species worldwide. Prior to hosting hunting programs, he started Colorado's first Ranching for Wildlife Program for antelope, which he ran for 15 years. Working alongside professional land managers to restore wildlife and protect habitat, Phil went on to guide clients to 500-plus big-game animals that have qualified for the record book and was named Safari Club International’s North American Bowhunting Outfitter of the Year. Phillips writes regularly about hunting issues, particularly those impacting Colorado and Texas. You can email him at [email protected].