Isn’t it ironic that Secretary of Energy Jennifer Granholm and others who supported the Biden administration in shutting down the Keystone XL pipeline now say pipelines are the best way to transport fuel after hackers tapped the Colonial pipeline’s networks on May 7, creating gas shortages and long lines at the pump for countless East Coast residents? I think we’d see the same irony with so-called wolf experts who say gray wolves should remain under federal protections if wolves impacted their lifestyle.

For the latest on the gray wolf saga, a group of 115 scientists wrote to the Biden administration Thursday asking it to restore federal protections for gray wolves. As reported by the Detroit News, the letter said the species’ removal from Endangered Species Act (ESA) protections in January was premature because “wolves have not fully recovered” and states are allowing too many to be killed.

“We’ve been shocked by the way states have been willing to go to all-out war against the wolves,” said John Vucetich of Michigan Technological University, a wildlife conservation professor quoted in the article. Clearly, the issue remains heated as those who live amongst wolves tell a different story.

Gray wolves were already delisted from the ESA in the Greater Yellowstone Ecosystem, accounting for Idaho, Montana and Wyoming, where farmers, ranchers and other rural residents work to co-exist amongst them. The wolves were officially removed from ESA protections in the rest of the Lower 48 by the Department of Interior’s (DOI) U.S. Fish and Wildlife Service (USFWS) because Great Lakes and Pacific Northwest states continue to document thriving wolf populations.

Addressed to SOI Deb Haaland and USFWS Principal Deputy Director Martha Williams, the letter goes on to charge that states with gray wolf populations will manage them to the “lowest allowable standards.” If this is the case, maybe this is based on the fact farmers and ranchers continue to document wolf-livestock and other wolf encounters that show wolf populations are not only healthy but are threatening their livelihoods.

The article notes that wolves in the western Great Lakes region (Michigan, Minnesota and Wisconsin) now number 4,400 animals. An additional 2,000-plus live in the six states spanning the Northern Rocky Mountains and the Pacific Northwest after Canadian gray wolves were introduced in Yellowstone National Park in the 1990s. Having hunted in Yellowstone states like Idaho, I have personally seen the impact of wolf packs when populations are not managed. Predator and prey species alike must be controlled if we expect their populations to remain in step with carrying capacity.

For now, the USFWS continues to defend wolves’ removal from ESA protections amid lawsuits filed by animal rights extremist and environmental groups. It holds that wolves are not required to be in every place they once lived to meet recovery requirements. In the meantime, the National Rifle Association and Safari Club International have the backs of those who live with wolves, from farmers to ranchers to area residents and, yes, hunters, who remain America’s best wildlife management tool. Considering hunters actually pay state wildlife agencies to hunt wolves by purchasing licenses and tags, what wildlife management option provides more funding for wildlife conservation and habitat than legal, regulated hunting?

As NRAHLF.org reported in February, Wisconsin had a wolf hunt that month the state game agency had to close just 48 hours into the week-long season because the wolf quota already was met. The Detroit News article referenced that hunt, saying the letter from the 115 scientists said hunters killed 216 wolves, “far exceeding the state’s quota of 119.” The scientists’ claim was false. The Wisconsin Department of Natural Resources reported that 135 wolves, not 216, were killed—16 more than the state's target of 119. 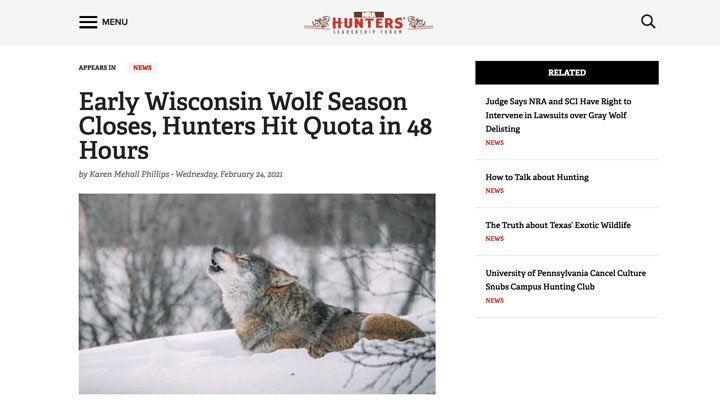 In monitoring the wolf issue in other states, the article said that Idaho Gov. Brad Little signed a measure into law permitting the use of night-vision equipment and helicopters to hunt wolves while proposed legislation in Montana seeks to allow methods such as using bait and night-vision scopes. These moves seem to indicate that those who live amongst wolves are experiencing something other than a fairy tale scenario animal rights groups purport. As this website noted in the article “The Wolf Is the Savior of the Environment?” last fall, “personal desire to make the wolf look good has resulted in a growing body of manuscripts that lack the quality we expect in scientific literature.” It also sounded home how those who seek to protect wolves believe “one should never let ugly facts ruin a beautiful story.”

So the merry-go-round ride continues over an issue that was successfully addressed and solved. Wolves were placed under ESA protections and then removed from those federal protections only after science showed their populations fully recovered. That’s how the ESA is designed to work, yet it appears some do not wish to celebrate the wildlife conservation victory. One wonders if the same scientists that say wolf hunting is taking too many wolves might change their attitude and say population management is necessary if wolves thrived in their own backyard.

Either way, lawyers representing both sides plan to resolve the issue prior to the fall hunting seasons.